It seems to be a week for endings. Following the retirement of the wildly successful Kepler spacecraft, we now say goodbye to Dawn following an extraordinary eleven years that took us not only to orbital operations around Vesta but then on to detailed exploration of Ceres. The spacecraft ran out of hydrazine, with the signal being lost by the Deep Space Network during a tracking pass on Wednesday. No hydrazine means no spacecraft pointing, vital in keeping Dawn’s antenna properly trained on a distant Earth.

I immediately checked to see if mission director and chief engineer Marc Rayman had gotten off a post on his Dawn Journal site, but he really hasn’t had time to yet. It will be interesting to see what Dr. Rayman says, and it’s appropriate here to thank him for the continuing updates and insights he provided throughout the Dawn mission. Keeping space exploration in front of the public is essential for continuing funding of deep space robotic missions, as both the Dawn and New Horizons team clearly understand (and there is much ahead for New Horizons!) 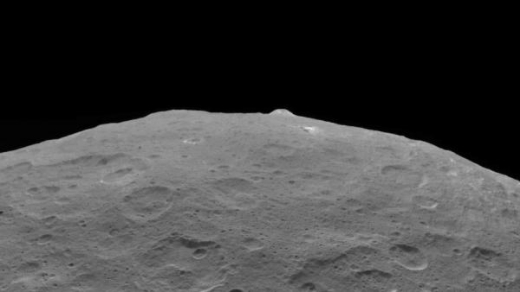 Image: This photo of Ceres and one of its key landmarks, Ahuna Mons, was one of the last views Dawn transmitted before it completed its mission. This view, which faces south, was captured on Sept. 1 at an altitude of 3570 kilometers as the spacecraft was ascending in its elliptical orbit. Credit: NASA/JPL-Caltech/UCLA/MPS/DLR/IDA.

The ability to orbit one target, move on to another and subsequently establish an orbit there is a demonstration of what ion engines can do, and a reminder of how significant the Deep Space 1 mission was in terms of testing these technologies. If DS1 established ion propulsion as a viable tool, Dawn took it to the next level, highlighting the kinds of exploration that may lie ahead as we contemplate missions to multiple Kuiper Belt objects (see Game-changer: A Pluto Orbiter and Beyond). Ambitious missions grow out of the gentle, efficient thrust of ion engines.

Ponder this: The orbiters we’ve sent to Mars had to burn their engines for orbital insertion. Consider something on the order of 300 kilograms of propellant for conventional rocketry to meet this requirement. Dawn could make the same change in speed (about 1000 meters/second) using fewer than 30 kilograms of xenon. But of course we wouldn’t use ion engines for this purpose. Ion engines demand patience: It would take Dawn three months to achieve this result while conventional engines in our orbiters complete this maneuver in 25 minutes. But missions with multiple targets or complex operations in deep space are suited to engines like Dawn’s, which accumulated 2,141 days (5.9 years) of thrust time in the course of its travels.

Describing Dawn’s changing trajectories and the intricate gravitational dance they involved, Rayman wrote this paean to ion propulsion in his Dawn Journal:

Without that technology, NASA’s Discovery Program would not have been able to afford a mission to explore the exotic world in such detail. Dawn has long since gone well beyond that. Having discovered so many of Vesta’s secrets, the adventurer left it behind. No other spacecraft has ever escaped from orbit around one distant solar system object to travel to and orbit still another extraterrestrial destination. From 2012 to 2015, the stalwart craft reshaped and tilted its orbit even more so that now it is identical to Ceres’. Once again, that was essential to accomplishing the intricate celestial choreography in which the behemoth reached out with its gravity and tenderly took hold of the spacecraft. They have been performing an elegant pas de deux ever since.

And now the mission is over, though the spacecraft will remain in Ceres orbit for at least twenty years, and mission engineers believe with 99 percent confidence that its orbit will last at least 50 years, keeping planetary protection protocols in place for the near future. As we look back, consider Dawn’s accomplishments. It was the first spacecraft to orbit a body between Mars and Jupiter, the first to visit a dwarf planet and the first to orbit two destinations beyond Earth. 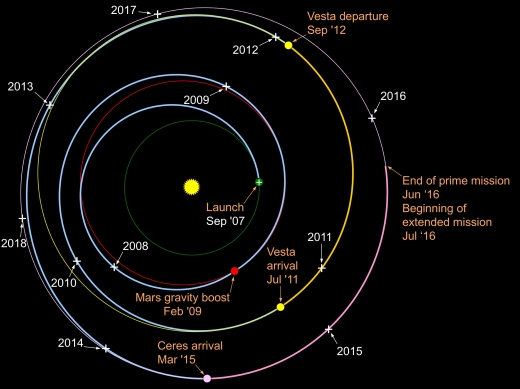 Image: Dawn’s interplanetary trajectory (in blue). The dates in white show Dawn’s location every Sept. 27, starting on Earth in 2007. Note that Earth returns to the same location, taking one year to complete each revolution around the Sun. When Dawn is farther from the Sun, it orbits more slowly, so the distance from one Sept. 27 to the next is shorter. Credit: NASA/JPL.

“In many ways, Dawn’s legacy is just beginning,” said principal investigator Carol Raymond at JPL. “Dawn’s data sets will be deeply mined by scientists working on how planets grow and differentiate, and when and where life could have formed in our solar system. Ceres and Vesta are important to the study of distant planetary systems, too, as they provide a glimpse of the conditions that may exist around young stars.”

Dawn’s discoveries at Vesta and Ceres have been described before in these pages, but we’ll track new conclusions from Dawn’s datasets well into the future. For now, I’m simply thinking about Dawn’s beginnings and all that has happened since. Congratulations to the entire team. 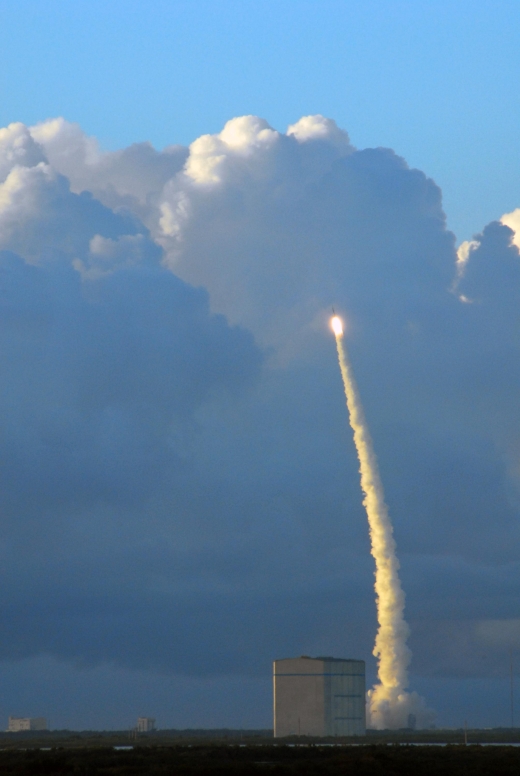