Beamed propulsion has clear advantages when it comes to pushing a payload up to interstellar flight speeds, which is why Breakthrough Starshot is looking at laser strategies. But what about a neutral particle beam in conjunction with a magnetic sail? We’ve discussed the possibilities before (see Interstellar Probe: The 1 KG Mission), where I wrote about Alan Mole’s paper in JBIS, followed by a critique from Jim Benford. Mole, a retired aerospace engineer, is now collaborating with plasma physicist Benford (CEO of Microwave Sciences) to examine a solution to the seemingly intractable problem of beam divergence. Getting around that issue could be a game-changer. Read on for the duo’s thoughts on sending a 1 kg probe to a nearby star system with a flight time in the range of 70 years. Part 2 of this study, outlining engineering issues and the practical realities of cost, will follow.

by James Benford and Alan Mole

We advance the concept for a 1 kg probe that can be sent to a nearby star in about seventy years using neutral beam propulsion and a magnetic sail. The concept has been challenged because the beam diameter was too large, due to inherent divergence, so that most of the beam would miss the sail. Increasing the acceleration from 1000 g’s to 100,000 g’s along with reducing the final speed from 0.1 c to 0.06 c redeems the idea. Such changes greatly reduce the acceleration distance so that the mission can be done with realistic beam spread. Magsail-beam interaction remains an aspect of this concept that needs further study, probably by simulations.

Particle beam propelled Magsails require far less power for acceleration of a given mass. There’s also ~ 103 increase in force on the sail for a given beam power. Deceleration at the target star is possible with the Magsail but not with a laser driven sail.

The neutral particle beam approach is conceptually similar to photon beams such as the laser-driven Starshot project. A disadvantage of reflecting photons from the sail will be that they carry away much of the energy because they exchange only momentum with the sail. Neutral particle beams transfer energy, which is much more efficient. The reflecting particles may in principle be left unmoving in space after reflection and thus the efficient energy efficiency can approach 100%.

The thrust per watt beam power is maximized when the particle velocity is twice the spacecraft velocity. The Magsail, with a hoop force from the magnetic field, is an ideal structure because it is under tension. High-strength low-density fibers make this lightweight system capable of handling large forces from high accelerations. The rapidly moving magnetic field of the Magsail, seen in the frame of the beam as an electric field, ionizes the incoming neutral beam particles. Nordley and Crowl discuss on-board lasers to ionize the incoming beam, although this adds additional on-board mass and power [2]. When the dipole field of the Magsail is inclined to the beam vector the Magsail experiences a force perpendicular to the beam vector, which centers it on the particle beam, perhaps providing beam-riding stability.

Alan Mole proposed using it to propel a lightweight probe of 1 kg [3]. The probe was accelerated to 0.1 c at 1,000 g by a neutral particle beam of power 300 GW, with 16 kA current, 18.8 MeV per particle. The particle beam intercepts a spacecraft that is a Magsail: payload and structure encircled by a magnetic loop. The loop magnetic field deflects the particle beam around it, imparting momentum to the sail, and it accelerates.

In Mole’s work, the neutral hydrogen beam at 18.8 MeV per particle and inherent beam divergence of 4.5 µradians accelerated to two-tenths of the speed of light (0.2 c) had acceleration of 103 g’s for 50 minutes [3]. This resulted in a 411 km diameter beam spot, far larger than the Magsail diameter, which was 0.27 km. So most of the beam missed the sail.

But if we use much higher acceleration, the sail will stay within the beam until it reaches the desired final velocity, even with microradian divergence. We choose 105 g’s, 106 m/s2 to accelerate to 0.06 c, 1.8 x 107 m/s.

Numerical experiments with the model developed by Nordley [6], and later replicated by Crowl, showed that the greatest momentum delivery efficiency is when the velocity of the neutral beam is twice the sail velocity. The physics of this is straightforward: Maximum energy efficiency comes when all of the energy goes to the sail and none of it remains in the beam. For a sail that is perfectly reflective, the beam bounces off the sail at the same velocity it impinges the sail. If after reflection it is moving at zero velocity (so none of the energy is left in the beam), the initial beam velocity must be twice the sail velocity, so that it impinges on the sail at a relative velocity equal to the sail velocity.

We take the beam velocity at the end of acceleration to be the twice the final sail velocity, 0.06c The energy of a hydrogen atom is imparted by accelerating through a voltage of 6.6 MeV. The mission parameters for a hydrogen beam then become those shown in Table 1.

The lighter the particle to be accelerated, the shorter the beam driver can be at a fixed field gradient. However, lighter-particle shorter beam drivers, while they may cost less, would require a larger sail due to the higher divergence of the beam.

For a second example, a mercury beam has a minimum divergence of 0.8 µradians, but must use far higher voltage because of the larger mass [4]. Mercury beam parameters are also given in Table 1.

We will see that when the beam divergence is in reality roughly 3 orders of magnitude higher than previous studies have assumed, from a nanoradian to microradian, rapidly moves the beam generator regime toward being very large and expensive.

Because in Table 1 the hydrogen beam sail diameter is so large, we will focus the rest of this discussion on the mercury beam. Even so, the mercury beam Magsail has a 260 m diameter and 1 kg mass, if the superconducting hoop has a density of steel, the thickness must be no larger than 0.44 cm, if the density of carbon, 0.8 cm.

Note that the sail diameter given in Table 1 is taken to be simply the diameter of the divergent beam encountering the Magsail. The diameter of the reflection region produced by the magnetic field of the sail could well be somewhat larger than the superconducting hoop diameter. (Of course, early in the acceleration, the beam will hit it at the axis where the magnetic field is greatest.)

When a Magsail driven by a neutral particle beam is at the early stages of the acceleration, the beam will have a considerably smaller spot size on the Magsail than it will later and will hit it at the axis where the magnetic field is greatest. Later on, as the Magsail flies away, the beam will reach a size dictated by its divergence. A question is: does the initial beam high intensity of the beam on the magnetic field tend to push the sails magnetosphere outward radially and make the effective diameter of the Magsail larger? If it does, then the beam divergence can be a bit larger and still strike the Magsail. Or, conversely one could accelerate the Magsail for a longer time because some of the beam would still be captured.

Simulations show the field being compressed; but they are of solar wind, which is taken to be uniform across a magnetic dipole. There are no simulations of the beam smaller than the sail. One would expect the loop generated field to be compressed in the direction of motion, but it seems reasonable for it to be inflated radially, especially if charged particles are trapped in it for significant periods of time.

Andrews and Zubrin have done single particle numerical calculations that do not include modeling dynamic effects (such as field distortions from magnetic pressure) and do not include any such “inflation” of the mirror due to trapped beam ions [7].

Figure 1 is taken from the late Jordan Kare’s NIAC report [8]. (From his figure, he considered using a nuclear detonation to accelerate a Magsail, which is not relevant to our discussion.) From the left a uniform solar wind strikes the Magsail, which in our case would be a non-uniform neutral particle beam. The beam encounters the peak of magnetic field along the axis of the sail. On the right of the figure, the field is distorted, producing a plasma interface shock against the magnetic field of the Magsail. Inflation of the magnetic field due to a particle beam pressure could occur. However, the effect would be to allow the beam divergence to be only a bit larger.

Note also that in this diagram the sail is shown as dragging the payload behind it as it accelerates. If part of the particle beam reaches the payload it could create substantial damage. Consequently, it might it be better to distribute the payload around the superconducting hoop where it would have the most protection against incoming charged particles. Note also the stability of the superconducting loop on a beam of finite width has not been investigated to date. However, the Starshot program is looking at this issue extensively. 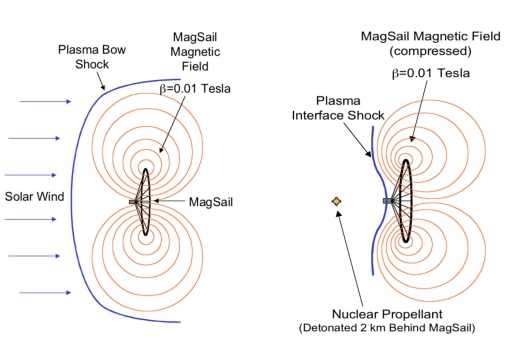 The assumption that the moving magnetic field of the Magsail, seen in the frame of the beam as an electric field, ionizes the incoming neutral beam particles must be quantified.

Since beam divergence is fundamentally limited, high accelerations can be used to insure the sail will stay within the beam until it reaches the desired final velocity, even with microradian divergence. This leads to ultrahigh, 105 g’s, 106 m/s2 to accelerate to 0.06 c. The Starshot system, a laser beam-driven 1 gram sail with the goal of reaching 0.2c, has been quantified in a detailed system model by Kevin Parkin [9]. It too uses 105-106 g’s. Magsail-beam interaction remains an aspect of this concept that needs further study, probably by simulations. This promising method for interstellar travel should receive further attention.