A workshop on interstellar flight titled Foundations of Interstellar Studies is to take place from 27 to 30 June of this year in the town of Charfield, Gloucestershire, United Kingdom, at the current headquarters of the Initiative for Interstellar Studies. This follows an initial ‘foundations’ conference in 2017 that was held at City College New York and the Harvard Club of New York; future conferences, “run jointly between several organisations depending on the host country,” are planned on a roughly two-year schedule. I immediately warmed to the theme that the Initiative for Interstellar Studies (i4IS) introduced by quoting Robert H. Goddard:

How many more years I shall be able to work on the problem I do not know; I hope, as long as I live. There can be no thought of finishing, for ‘aiming at the stars’ both literally and figuratively, is a problem to occupy generations, so that no matter how much progress one makes, there is always the thrill of just beginning. 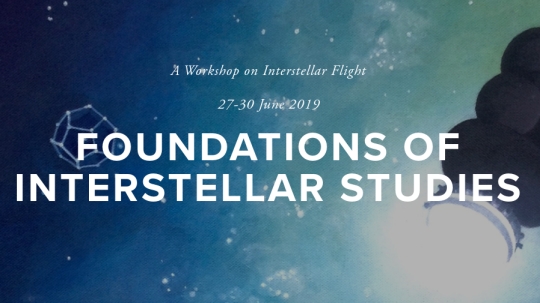 Browsing through the conference materials I note that, with reference to famous physics conferences like Shelter Island, Pocono and Oldstone, the emphasis is on both academic rigor but also informal conversation, a format that i4IS president Kelvin Long hopes will energize the interstellar community. The aim is “to get researchers together and to maximize the social interaction time for idea swapping and information exchange and it is expected that the ideas and discussions (and maybe even calculations) should continue into the evening social sessions.”

The three days of discussions in this year’s conference will take place at the Bone Mill, which has been the i4IS headquarters since 2017. This is beautiful country, as those of you who have been to the Cotswolds will already know, in the village of Charfield, near Wootton-under-Edge, in the English county of Gloucestershire. The three themes under focus, each with a day devoted to it:

In addition to the formal scientific proceedings, there will be an opening social event on the evening of Thursday 27th June, starting at 18:00 hours at the Bone Mill. There will also be a formal dinner on Saturday 29th June starting at 19:00 hours at a venue to be announced.

An invitation will be made to submit papers from selected authors post-conference, to the Journal of the British Interplanetary Society (JBIS) and/or publication in the official conference proceedings. For more on the Foundations of Interstellar Studies Workshop 2019, including maps and information on accommodation, go to https://www.fisw.space/fisw-2019.

2061 will commemorate an interesting year in space exploration. It is the centennial not just of the first human flight into space by Yuri Gagarin but also of the speech by which John Kennedy propelled the US aerospace community into a determined drive for a lunar landing. But we might also add another memorable factor. In 2061, Comet Halley makes its return. The last time we saw Halley was in 1986, when five spacecraft ranging in origin from the European Space Agency to the Soviet Union and France as well as Japan studied the comet in the inner system.

Thus we had the first comet observed in detail by spacecraft, giving us information about the cometary nucleus, the coma and the tail, helping us understand cometary structure. The fact that the Halley expeditions were so determinedly multinational (although the studied US solar sail never materialized) gives impetus to an effort called Planetary Exploration Horizon 2061 which, according to its founders is creating a long-term analysis of four primary areas of space exploration, all of these addressed from a determinedly international perspective.

Thus the “the four pillars of planetary exploration” Horizon 2061 is examining:

[The year 2061] symbolically represents our intention to encompass both robotic and human exploration in the same perspective. Its distant horizon, located well beyond the usual horizons of the planning exercises of space agencies and of their standing committees, which generally address shorter time scales, avoids any possible confusion with them and is intended to trigger a joint foresight thinking of the scientific and technology communities of planetary exploration that will free the imagination of the planetary scientists, who are invited to formulate what they think are the most relevant and important scientific questions independently of the a priori technical feasibility of answering them; of the engineers and technology experts, who are invited to explore innovative technical solutions that will make it possible to fly by 2061 the challenging space missions that will allow us to address these questions.

Space missions are designed, the Horizon 2061 proponents note, around a Science Traceability Matrix (STM) in which mission science questions and objectives define the instruments needed, the mission profile and the kind of platform on which the mission will be flown. Unlike single missions, though, Horizon 2061 intends to write the STMs for a set of representative missions that will investigate everything from the origin of planetary systems to the detection of life. Observations to be made and destinations within the Solar System where such measurements can be performed will determine the type of space missions that emerge from this matrix.

Two meetings have already occurred, the first in Bern in September of 2016, the second in Lausanne in April of 2018. Coming now is the next step, devoted to the synthesis of the exercise. This will take place in an international colloquium hosted by the Université Paul Sabatier in Toulouse from June 5th to 7th, 2019.

The primary organizers will be the Institut de Recherche en Astrophysique et Planétologie (IRAP) and the Observatoire Midi-Pyrénées (OMP). This colloquium, placed under the sponsorship of COSPAR [Committee on Space Research, established by the International Council for Science in 1958], will complete the design of the four pillars and initiate the drafting of the final report, which will be edited and published under the auspices of COSPAR.

Meeting agenda, registration and other materials are available at https://h2061-tlse.sciencesconf.org/.