TRAPPIST-1: Of Flux and Tides

Seven planets of roughly Earth-size make TRAPPIST-1 a continuing speculative delight, as witness the colorful art it generates below. And with three of the planets arguably in the star’s habitable zone, this diminutive star attracts the attention of astrobiologists anxious to examine the possible parameters under which they orbit. One thing that is only now receiving attention is the question of planet-to-planet tidal effects, as opposed to the star’s tidal effects on its planets. 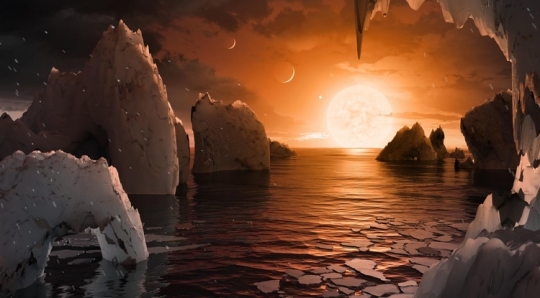 Image: An artist’s impression of the perpetual sunrise that might greet visitors on the surface of planet TRAPPIST-1f. If the planet is tidally locked, the “terminator region” dividing the night side and day side of the planet could be a place where life might take hold, even if the day side is bombarded by energetic protons. In this image, TRAPPIST-1e can be seen as a crescent in the upper left of the image, d is the middle crescent, and c is a bright dot next to the star. Credit: NASA/JPL-Caltech.

In our Solar System, we’ve become familiar with the idea that tidal deformation can cause interior heating, a fact that could well support both Europa at Jupiter and Enceladus at Saturn with energy needed to retain temperatures suitable for life below their icy surfaces. The effects are extreme at Io (though hardly life-inducing!) and also noteworthy on Neptune’s large moon Triton. Here again TRAPPIST-1 stands out, because we know of no other system where planets, not moons, are so tightly wound that they can raise significant tides on each other.

Tides from the other planets in a planetary system are rarely seen as a factor, say the scientists, but heating due to tidal deformation is definitely in play here. From the paper:

Such tides are typically negligible because the mass of the central tide raising body is usually far greater than other bodies in the system, and also because the distances between these bodies are vast and the strength of tidal forces decreases with the distance between them cubed. The seven planet extrasolar system TRAPPIST-1…is the first system to be discovered where this is not the case. The separation distance at conjunction is small enough that tides raised by neighbouring planets can become significant, and heating must occur as a result.

Similarly, TRAPPIST-1’s two inner planets come close enough to raise powerful tides on each other, possibly sustaining volcanic activity on worlds that would be too hot on the day side to support life. An atmosphere maintained by volcanic eruptions could move heat to the night side, assuming tidal lock. 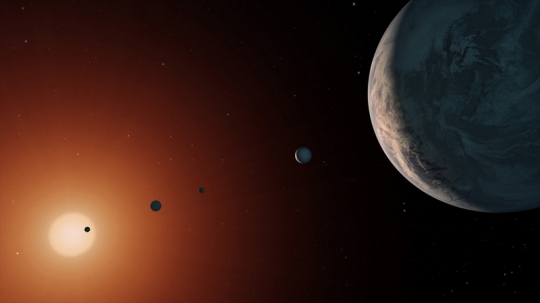 Image: An artist’s concept for a view of the TRAPPIST-1 system from near TRAPPIST-1f. The system is located in the constellation Aquarius and is just under 40 light-years away from Earth. Credit: NASA/JPL-Caltech.

The Trouble with TRAPPIST-1e

We’ve also recently looked at Lisa Kaltenegger’s work on the effect of intense radiation on M-dwarf planets (see M-Dwarfs: Weighing UV Radiation and Habitability). Kaltenegger (Cornell University/Carl Sagan Institute) has been investigating possible ways for life to survive the intense flares and ultraviolet radiation that pummel such worlds. Various mechanisms suggest themselves, enough to keep open the possibility that planets like these could sustain life.

What Federico Fraschetti (Harvard Smithsonian Center for Astrophysics) and colleagues have been studying is the ability of a star so much cooler and less massive than the Sun to emit such quantities of radiation. The scientists have simulated the path of high-energy protons through the magnetic field of the star, finding that the first of the three TRAPPIST-1 planets thought to be in the habitable zone (TRAPPIST-1e) is receiving up to 1 million times more flux than Earth.

We’re fortunate, of course, in being protected by our planet’s magnetic field from our star’s energetic proton bath, but Fraschetti’s calculations show that to have the same effect at TRAPPIST-1e, the planet’s magnetic field would need to be hundreds of times more powerful than Earth’s. The conclusion is based on the star’s most likely field alignment, which brings its energetic protons directly to the surface of TRAPPIST-1e, where damaging biological effects could occur. But much depends upon how the star’s magnetic field is angled away from its axis of rotation, making this a key datapoint for future investigations. From the paper:

Based on the scaling relation between far-UV emission and energetic protons for solar flares by Youngblood et al. (2017), we estimate that the innermost putative habitable planet, TRAPPIST-1e, is bombarded by a proton flux up to 6 orders of magnitude larger than experienced by the present-day Earth. Such a bombardment of planets in this study is found to result largely from the misalignment of the B-field/rotation axis assumed for the star-proxy. Since the exact magnetic morphology and alignment of the magnetic field is currently unknown for TRAPPIST-1, and for M dwarfs in general, our results indicate that determination of these quantities for exoplanet hosts would be of considerable value for understanding their radiation environments.

TRAPPIST-1e, then, may need some of Lisa Kaltenegger’s proposed solutions to the radiation flux problem if it is to be considered habitable. Lithophilic life, or perhaps life beneath an ocean, is one solution among those that Kaltenegger has proposed, and of course there is the possibility of tidal lock, which could keep the ‘dark’ side of the planet free of the flux. Habitability, as we continue to learn, is by no means an easy call, no matter where a planet is located within or without the putative habitable zone of its host.