An ocean inside Pluto would have implications for many frozen moons and dwarf planets, not to mention exoplanets where conditions at the surface are, like Pluto, inimical to life as we know it. But while a Plutonian ocean has received considerable study (see, for example, Francis Nimmo’s work as discussed in Pluto: Sputnik Planitia Gives Credence to Possible Ocean), working out the mechanisms for liquid ocean survival over these timeframes and conditions has proven challenging. A new paper now suggests a possible path.

Shunichi Kamata of Hokkaido University led the research, which includes contributions from the Tokyo Institute of Technology, Tokushima University, Osaka University, Kobe University, and the University of California, Santa Cruz. At play are computer simulations, reported in Nature Geosciences, that offer evidence for the potential role of gas hydrates (gas clathrates) in keeping a subsurface ocean from freezing. At the center of the work, as in so much recently written about Pluto, is the ellipsoidal basin that is now known as Sputnik Planitia. 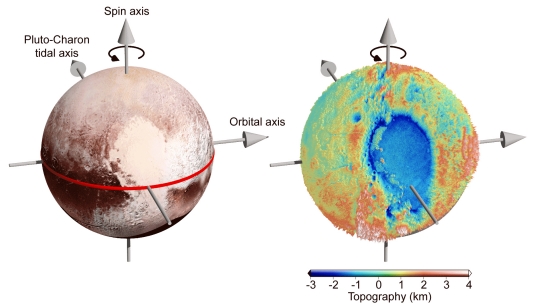 Gas hydrates are crystalline solids, formed of gas trapped within molecular water ‘cages’. The ‘host’ molecule is water, the ‘guest’ molecule a gas or a liquid. The lattice-like frame would collapse into a conventional ice crystal structure without the support of the trapped molecules.

What is illuminated by the team’s computer simulations is that such hydrates are highly viscous and offer low thermal conductivity. They could serve, in other words, as efficient insulation for an ocean beneath the ice. The location and topography of Sputnik Planitia lead the researchers to believe that if a subsurface ocean exists, the ice shell in this area is thin. Uneven on its inner surface, the shell could thus cover liquid water kept viable by the insulating gas hydrates.

We wind up with a concept for Pluto’s interior that looks like the image below. 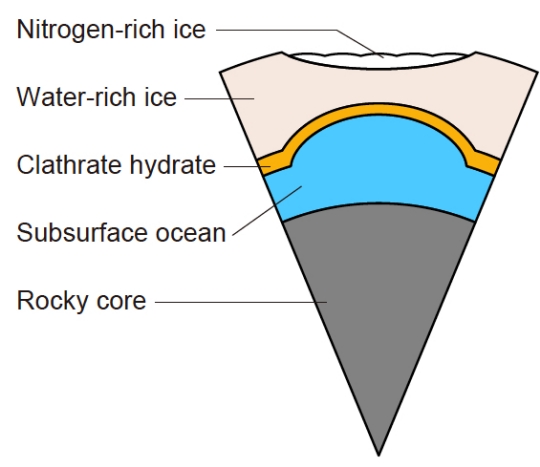 Image: The proposed interior structure of Pluto. A thin clathrate (gas) hydrate layer works as a thermal insulator between the subsurface ocean and the ice shell, keeping the ocean from freezing. Credit: Kamata S. et al., “Pluto’s ocean is capped and insulated by gas hydrates.” Nature Geosciences, May 20, 2019 (full citation below).

Methane is implicated as the most likely gas to serve within this insulating lattice, a provocative theory because of what we know about Pluto’s atmosphere, which is poor in methane but rich in nitrogen. What exactly is happening to support this composition? From the paper:

CO2 clathrate hydrates at the seafloor could have acted as a thermostat to prevent heat transfer from the core to the ocean. Primordial CO2, however, may have been converted into CH4 through hydrothermal reactions within early Pluto under the presence of Fe–Ni metals. As CH4 and CO predominantly occupy clathrate hydrates, the components that degassed into the surface–atmosphere system would be rich in other species, such as N2.

We arrive at an atmosphere laden with nitrogen but low in methane. This notion of a thin gas hydrate layer as a ‘cap’ on a subsurface ocean is one that could serve as a generic mechanism to preserve subsurface oceans in large, icy moons and KBOs. “This could mean there are more oceans in the universe than previously thought, making the existence of extraterrestrial life more plausible,” adds Kamata.

The authors point out that freezing of the ocean, causing the ice shell to thicken, would cause the radius and surface area of Pluto to increase, producing faults on the surface. New Horizons was able to observe these, and recent studies have shown that the fault pattern supports the global expansion of the dwarf planet. Thus we have a scenario consistent with a global ocean, perhaps one that is still partly liquid. Analyzing surface changes would offer constraints on the thickness of any potential layers of clathrates that could firm up the liquid water hypothesis.

The paper is Kamata et al., “Pluto’s ocean is capped and insulated by gas hydrates,” Nature Geosciences May 20, 2019 (abstract).

Next post: Is High Definition Astrometry Ready to Fly?