It’s always good to have eyes and ears on the ground at events I can’t get to, so I was pleased when Aleksandar Shulevski contacted me with the offer to send back notes from the European Space Agency’s Advanced Concepts Team Interstellar Workshop in Noordwijk in the Netherlands. Born and raised in Bitola, Republic of Macedonia, Aleksandar is a science fiction reader and amateur astronomer who followed up electrical engineering studies in Skopje with an MSc in astronomy at Leiden University (Netherlands), dealing with calibration issues on the LOFAR radio telescope. He received a PhD from the University of Groningen, doing research on active galactic nuclei radio remnants observed with LOFAR. After working at the Netherlands Institute for Radio Astronomy (ASTRON) as junior telescope scientist, he is now a research scientist at the Anton Pannekoek Institute for Astronomy at the University of Amsterdam, specializing in low-frequency radio transients and pursuing his interest in SETI. Aleksandar could only attend half of the workshop, and unfortunately no video is available, but I’m told a fall issue of Acta Futura should include papers on many of the topics covered in Noordwijk. 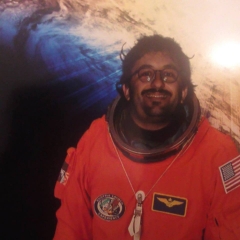 I have attended only the first day of the Interstellar Exploration workshop, organized by the Advanced Concepts Team (ACT) at the ESTEC ESA site in Noordwijk. Even though I follow the goings on in the community, I must admit that I almost missed the workshop; maybe the organizers should have advertised it more widely. Obviously this is just a personal opinion.

The program indicated potentially an interesting gathering, and I am pleased to say that I was not disappointed. The auditorium was packed, I estimate that more that the total number of participants was about 120. The technical director of ESA opened the workshop, remarking that interstellar topics are more and more in the limelight, especially since Breakthrough Initiatives launched Breakthrough Starshot: “It’s never too early to start discussing interstellar matters”.

Michael Hippke started the morning session with a popular talk on interstellar communication. He gave a thorough overview on the history of thought dealing with the problem of communicating with other worlds. The radio window was de-emphasised on account of more exotic techniques like X-ray lasers, neutrinos etc. Michael thus established the “out of the box” thinking needed for such a meeting.

Rob Swinney (BIS) gave a historical overview of fusion propulsion concepts, covering the design of the Daedalus craft, as well as the successor design effort (Icarus). His remarks were in line with his enthusiasm: “We tend to underestimate what we can do on long timescales”.

The ongoing effort funded by NASA to outline and design a mission concept for a probe to 1000 AU was the topic of the presentation by Pontus Brandt. The tentative launch date is to be sometime in the 2030s. Pontus went over past missions which are on their way out of the Solar System (Pioneer, Voyager, New Horizons), tracing their origins to a strategy for Solar System research outlined in the Simpson committee report of 1960. The committee was chaired by John A. Simpson and James A. Van Allen as part of the contribution of the Space Studies Board, which was established in 1958 to focus on space research for the National Academies of Sciences, Engineering, and Medicine.

Long term thinking is key, along with lessons learned from past experience. In a set of stunning visuals, Brandt outlined current plans. Most likely the probe will form its trajectory by a Jupiter gravity assist, burning its final fuel supply there to achieve final escape velocity considerably greater than that of Voyager 2, reaching interstellar space in 15 years. Mission goals are observations of the infrared background as well as taking the first comprehensive “outside view” of the Solar system.

Michael Waltemathe discussed the philosophical and religious aspects of interstellar travel. What if any ETIs in existence are morally superior? Will humanity export the concept of original sin among the stars? Issues like planetary protection in the interstellar context were raised, and obviously, there were few definite answers.

Phil Lubin’s presentation dealt with directed energy propulsion, discussing detailed concept designs on Breakthrough Starshot, specifically the emitter array. Excellent beam handling was reported, and no issues (apart from funding) are show-stoppers on the path of scaling up to the operational laser system. However, an issue that warrants serious research effort is the communication subsystem. Laser comms will suffer from unattainable pointing accuracy requirements. The lack of deceleration in the target system may be problematic, but potentially overcome by launching a huge number of StarChips in succession, thus replacing the need for orbiting craft. The beamer system has tangential benefits as well, like Solar System exploration applications, and planetary defense. Long term R&D commitment is needed to realize the full potential of this effort.

[PG: I notice that MIT Technology Review just posted an article looking at some of the issues involved in getting this kind of laser array operational, while reviewing other issues re Starshot that Aleksandar mentions].

The morning session was followed by a less structured period for the duration of which multiple discussion groups were formed upon the suggestion of interested attendees who proposed topics. The organizers suggested most of the questions that needed to be addressed at these sessions. I proposed to discuss the propagation effects ISM plasma would have on the radio link used for communication with a Breakthrough Starshot style StarChip. There are multiple papers on the topic and we went over David Messerschmitt’s concepts of signal conditioning, discussed at length in his book featured on Centauri Dreams in the past [for more on Messerschmitt, see for example, Is Energy a Key to Interstellar Communication?]

The discussion period was followed by a panel on which each discussion topic had a representative, and the audience had a chance to ask questions. The afternoon plenary session began with a talk by Andreas Hein on worldships, in which he presented results from his latest paper in Acta Futura. Everything else being equal, and assuming economic growth continues unabated, Hein believes Earth will be able to build a worldship in a few hundred years, although the concept of a worldship may be by then outpaced by more practical developments.

Angelo Vermeulen presented the research done by him and collaborators at TU Delft and elsewhere on evolving spacecraft which borrow from biology to convert asteroids to interstellar craft. The study focused on the life support aspects of the problem and went on to model at length various constraints like (for example) the impact of the mineral content of the asteroid being used on mission viability.

Jeffrey Punske focused on language development on generation ships. Illustrating the various (and not always obvious) reasons for language drift, he concluded that it is inevitable that the language of a generation ship will evolve so far from Earth standard in a matter of a few hundred years as to render communication between the two unintelligible, something which mission planners should take into account. He dismissed the notion that a universal translator device is a viable development. If communication becomes a ritual performed by a priestly caste on the ship using the archaic language of the predecessors, maybe communication will still be possible in some form even after the divergence occurs.

Elke Hemminger addressed the sociology of interstellar exploration. Using an interactive approach, she engaged the audience in discussing philosophical topics. What if the values we hold most dear in our current societal organization are incompatible with the mission requirements of a colony ship? What are we willing to sacrifice to make the mission a successful one? Individual freedom? Is it worth it to go to the stars if we make such sacrifices?

These are more than abstract topics and may have more immediate concern on the human condition. It can easily turn out that dealing with climate change will require modification of our values. It may well be that totalitarian societies are more suited to dealing with emergencies than democracies. How do we balance our social values against the imperative of survival?

ESA’s Advanced Concepts Team closed the session by outlining the results of the latest Global Trajectory Optimisation Competition, this time dealing with Galaxy colonization, in which three types of interstellar generational vessels are imagined to be sent around the Milky Way in a quest 90 million years long. This was the 10th edition of the GTOC competition, hosted this year by the Mission Design and Navigation section at the Jet Propulsion Laboratory. China’s solution won, in a very interesting and difficult problem posed by JPL. An August workshop will allow top teams from the competition to present papers at the Astrodynamics Specialist Conference in Maine.