Some confusion has arisen about a possible circumplanetary disk in the system PDS 70, which I wrote about recently (see Exoplanet Moons in Formation?, from June 7). A team led by led by Valentin Christiaens at Monash (Australia) presented evidence for the kind of disk that may have formed the moons of Jupiter around the forming planet PDS 70b, using data from the Very Large Telescope, finding evidence for both the disk and a developing atmosphere here.

The finding was admittedly tentative, which should be kept in mind as we resolve the discrepancy between this and a separate observation, what Rice University is calling in a news release ‘the first observations of a circumplanetary disk of gas and dust…’ What we have in the Rice document is a report on a paper from the university’s Andrea Isella and colleagues, who studied millimeter wave radio signals from the Atacama Large Millimeter/submillimeter Array (ALMA) to identify a circumplanetary disk around the other forming planet here, PDS 70 c. 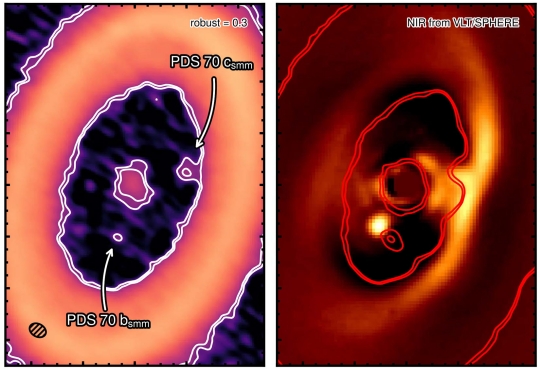 Image: Radio astronomers using the Atacama Large Millimeter/submillimeter Array of telescopes in Chile have found a disk of gas and dust (left) around exoplanet PDS 70 c, a still-forming gas giant that was obscured from view in the 2018 infrared image (right) that first revealed its sister planet, PDS 70 b. Credit: A. Isella, ALMA (ESO/NAOJ/NRAO).

I want to clear this up because several emails express confusion about which planet is doing what. What’s happening is that two separate teams are reporting on findings that deepen our interest in this young system. Circumplanetary disks are new terrain for exoplanetology, and most models of planet formation show that such disks last no more than 10 million years. Thus observing what may be two instances of moons forming around planets in the same system is an extraordinary opportunity. No wonder multiple teams are digging into it.

On the PDS 70b possibility, Isella reports the detection of a continuum emission “close, but not coincident, to the position of PDS 70 b.” His team has two sources of emission that are interesting, one near each forming world, and labels them PDS 70 csmm and PDS 70 bsmm respectively, the ‘smm’ standing for ‘submillimeter.’

In Isella’s work, the millimeter wavelength observations of this star from ALMA were backed by data from the VLT’s SPHERE instrument, and a second VLT instrument called MUSE, which observed in the visible wavelength called H-alpha, an emission that occurs when infalling hydrogen is ionized. “It’s complementary to the optical data,” said Isella, “and provides completely independent confirmation that there is something there,”

What Isella is arguing is that the two sources, one near each planet, might have different physical origins, with the source at PDS 70b offset from the planet itself. Here’s what the Isella paper, which appears in Astrophysical Journal Letters, says about PDS 70b:

The last item of discussion concerns the nature of PDS 70 bsmm. Its proximity to PDS 70 b suggests that the observed continuum emission might be somehow related to the planet. Due to the uncertainties on the position of the host star in the ALMA images, we cannot exclude that the sub-millimeter continuum arises for circumplanetary dust.

And here is a color-enhanced image of millimeter-wave radio signals showing the disk of gas and dust around PDS 70c: 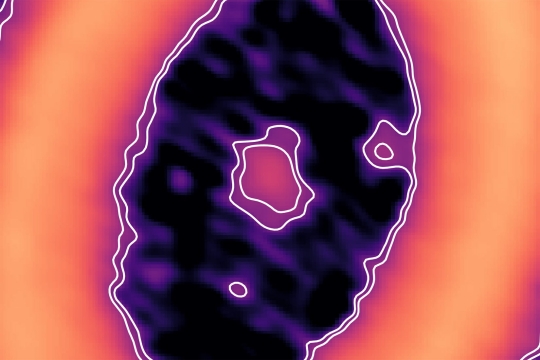 Between the two papers, then, we’re looking at the possibility of two circumplanetary disks forming around separate worlds in this system. Both these planets appear to be 5 to 10 times larger than Jupiter, with the innermost at roughly the distance from Uranus to the Sun, while PDS 70c is in an orbit analogous to Neptune’s. It’s clear that this system is going to repay further study, for we are now at the point where our observatories can examine planetary systems in rich detail and observe moon formation in its nascent stages. Says Isella:

“There are a handful of candidate planets that have been detected in disks, but this is a very new field, and they are all still debated. (PDS 70 b and PDS 70 c) are among the most robust because there have been independent observations with different instruments and techniques.”