We’ve been looking at circumstellar disks for quite some time, and teasing out images of actual planets within them, as witness HR 8799, where four exoplanets have been found. Just recently we saw imagery of a second world around PDS 70, both planets seen by direct imaging as they plowed through the disk of dust and gas surrounding a young star. All told, we now have more than a dozen exoplanets that have been directly imaged, though only two are in multi-planet systems. PDS 70b is sweeping out an observable gap in the disk. 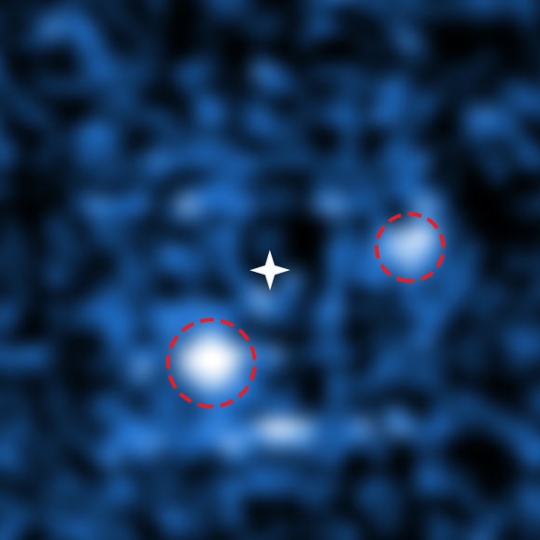 Image: PDS 70 is only the second multi-planet system to be directly imaged. Through a combination of adaptive optics and data processing, astronomers were able to cancel out the light from the central star (marked by a white star) to reveal two orbiting exoplanets. PDS 70 b (lower left) weighs 4 to 17 times as much as Jupiter while PDS 70 c (upper right) weighs 1 to 10 times as much as Jupiter. Credit: ESO and S. Haffert (Leiden Observatory).

Now we learn that within the same system, we have evidence for the first circumplanetary disk, forming around PDS 70b, the innermost of the two worlds. The planet is about 3.2 billion kilometers from the host star, in an orbit roughly similar to that of Uranus in our own system, and was discovered last year before recent work revealed the existence of PDS 70c. The study, led by Monash University (Australia) and including an international team, worked with an algorithm developed to extract faint signals from Very Large Telescope data.

Led by Valentin Christiaens at Monash, the team worked at infrared wavelengths to analyze the spectrum of the planet produced by SINFONI (Spectrograph for INtegral Field Observations in the Near Infrared) at the VLT, analyzing three hypotheses to explain what they saw. The best fit to the data was a model that incorporated a developing atmosphere as well as a circumplanetary disk, for atmospheric models alone could not account for the observed flux.

Here’s the image that appears in the paper on this work: 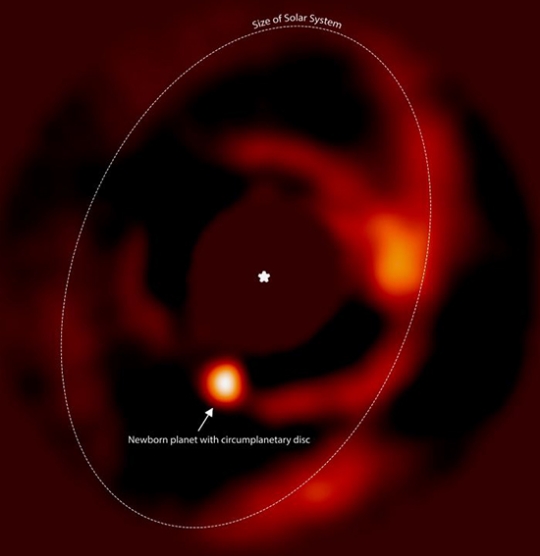 Image: Infrared image of the newborn planet PDS 70 b and its hypothesized circumplanetary disc, within its birth environment. Size of the Solar System given for comparison. Credit: V. Christiaens et al./ ESO.

This is a tentative finding, as the authors acknowledge. They list several caveats, including their use of a limited range of atmospheric models and a data fit that is not perfect. The paper also discusses the possibility that the assumptions between their circumplanetary disk models may be incorrect. But supporting the circumplanetary disk result is the fact that the team’s calculated accretion rates for the planet agree with observation, while the presence of specific carbon monoxide emission features supports a forming accretion disk around the planet.

And there is this:

If follow-up observations can firm up the hypothesis, we would be seeing a newborn giant planet forming its own family of satellites, much as many scientists believe Jupiter did as it evolved in the circumstellar disk. There is also the interesting 2:1 resonance in the two planetary orbits, so that the inner planet orbits twice for every single revolution of the outer world. What bearing this may have on theories of giant planet migration in our own system may become clearer as we examine more young exoplanets that display the same kind of resonance.

If we do have a satellite-forming disk around a planet here, we can add that to the mix as we try to firm up our models of giant planet formation. “Despite an intensive search circumplanetary discs have until now eluded detection,” says Christiaens. “This first piece of evidence suggests theoretical models of giant planet formation are not far off.”

The paper is Christiaens et al., “Evidence for a Circumplanetary Disk around Protoplanet PDS 70 b,” Astrophysical Journal Letters Vol. 877, No. 2 (3 June 2019). Abstract / Preprint. The discovery of the second young planet around PDS 70 is discussed in Haffert et al., “Two accreting protoplanets around the young star PDS 70,” Nature Astronomy 3 June 2019 (abstract).