Because Europa Clipper has been on my mind, what with the confirmation of its next mission phase (see Europa Clipper Moves to Next Stage), we need to continue to keep the mission in context. What is playing out is a deepening of our initial reconnaissance of the Jovian system, and the JUICE mission (Jupiter Icy Moons Explorer) is a significant part of that overall effort. The European Space Agency has the spacecraft under development, with Airbus Defence and Space as the primary contractor.

We saw last week that while Europa Clipper will use flybys of Ganymede and Callisto for gravity maneuvers intended to refine its orbit, the latter two moons are not science priorities. JUICE, on the other hand, focuses on all three, each thought to house liquid water beneath the surface. JUICE is slated for a June, 2022 launch, reaching Jupiter in 2029 with the help of five gravity assists along the way, so its operations will overlap with Europa Clipper, the NASA craft launching in 2023. The coming decade will be busy indeed as we journey to and explore these compelling icy targets.

The orbital maneuvers chosen for JUICE are intriguing, for after its first flyby of Europa in 2030, the spacecraft is to enter a high-inclination orbit to study Jupiter’s polar regions and magnetosphere. Repeated flybys of Europa, Ganymede and Callisto are planned, and following a Callisto flyby in 2031, the spacecraft will actually enter orbit around Ganymede, making it the first spacecraft to orbit a moon other than our own. I’m simplifying these complicated orbital maneuvers for the sake of brevity, but the point is that JUICE will greatly expand our datasets on all three moons.

In June of 2019, engineers at Airbus Defence and Space’s site in Toulouse tested the navigation camera that will be essential for radio tracking and position and velocity information of the spacecraft relative to the moon it is currently studying. Given the powerful radiation found near Jupiter, the spacecraft will, like Europa Clipper, be radiation-hardened, allowing it to operate between 200 and 400 kilometers from its targets at closest points of rendezvous. The pointing accuracy demanded of NavCam during fast and close approaches like these is critical to the mission’s success.

The June tests looked at the NavCam engineering model in real sky conditions, the point being to stress the hardware and software interfaces to validate their design, as well as to prepare the image processing and onboard navigation software that JUICE will use to acquire its images. The engineers observed Earth’s own moon and a variety of sky objects included Jupiter itself as part of these tests, running NavCam in ‘imaging mode’ and ‘sky centroiding mode’ as part of fine tuning attitude control software. 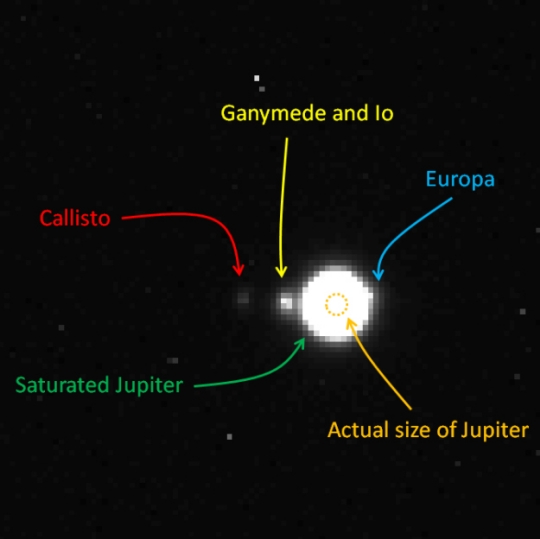 Image: The Navigation Camera (NavCam) of the Jupiter Icy Moons Explorer (JUICE) has been given its first glimpse of the mission’s destination while still on Earth. The camera was mounted to an equatorial mount and pointed towards different targets, including bright stars, Jupiter and its moons in order to exercise its ‘Imaging Mode’ and ‘Stars Centroiding Mode’. The integration time was optimized for capturing the stars and moons acquisition, so Jupiter appears saturated. In this annotated image the size of Jupiter is indicated. Credit & Copyright: Airbus Defence and Space.

“Unsurprisingly, some 640 million kilometres away, the moons of Jupiter are seen only as a mere pixel or two, and Jupiter itself appears saturated in the long exposure images needed to capture both the moons and background stars, but these images are useful to fine-tune our image processing software that will run autonomously onboard the spacecraft,” says Gregory Jonniaux, Vision-Based Navigation expert at Airbus Defence and Space. “It felt particularly meaningful to conduct our tests already on our destination!”

Image: Impressions of how the Jupiter Icy Moons Explorer will see moons Europa (left), Ganymede (middle) and Callisto (right) with its Navigation Camera (NavCam). To generate these images, the NavCam was fed simulated views – based on existing images of the moons – to process realistic views of what can be expected once in the Jupiter system. Credit & copyright: Airbus Defence and Space.

The actual flybys will provide close inspection of surface features on Europa, Ganymede and Callisto. In the suite of tests, NavCam also received simulated views of the three moons in order to process the kind of imagery it will acquire in Jupiter space. NavCam will capture imagery that will be greatly augmented by the high-resolution camera suite that will give us our best views of the icy surfaces below.

By the end of 2019, the test NavCam will be augmented with a full flight representative performance optics assembly that will support onboard tests of the complete spacecraft. Meanwhile, a test version of the spacecraft’s 10.5-m long magnetometer boom developed by SENER in Spain has undergone testing at ESA’s Test Centre in the Netherlands, as part of what ESA is describing as “… the most powerful remote sensing, geophysical, and in situ payload complement ever flown to the outer Solar System.” 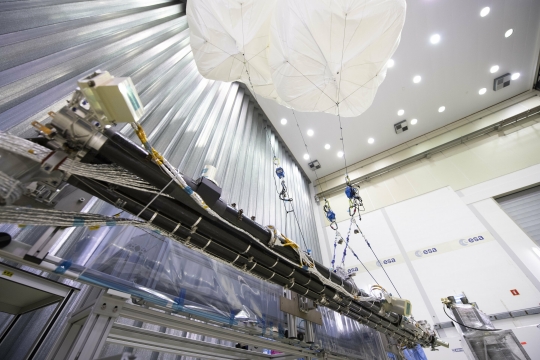