Somehow it feels as if the Hubble Space Telescope has been with us longer than the 30 years now being celebrated. But it was, in fact, on April 24, 1990 that the instrument was launched aboard the space shuttle Discovery, being deployed the following day. 1.4 million observations have followed, with data used to write more than 17,000 peer-reviewed papers. It’s safe to say that Hubble’s legacy will involve decades of research going forward as its archives are tapped by future researchers. That’s good reason to celebrate with a 30th anniversary image.

I’m reminded that the recent work we looked at on the interstellar comet 2I/Borisov involved Hubble as part of the effort that detected the highest levels of carbon monoxide ever seen in a comet so close to the Sun. Using Hubble data is simply a given wherever feasible. And given yesterday’s article on star formation and conditions in the Sun’s birth cluster that may have produced leftover material from other stellar systems still orbiting our star, it’s worth noting the portrait Hubble just took of two extraordinary nebulae that are part of a star-formation complex. 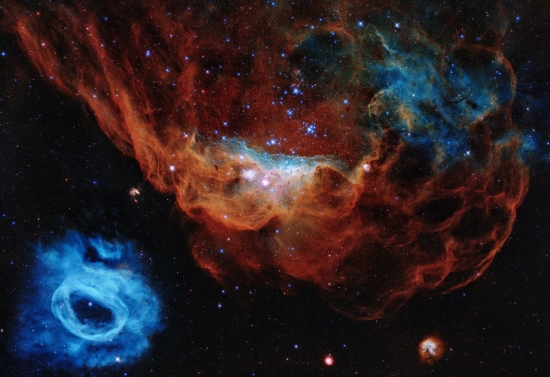 Image: This image is one of the most photogenic examples of the many turbulent stellar nurseries the NASA/ESA Hubble Space Telescope has observed during its 30-year lifetime. The portrait features the giant nebula NGC 2014 and its neighbor NGC 2020 which together form part of a vast star-forming region in the Large Magellanic Cloud, a satellite galaxy of the Milky Way, approximately 163,000 light-years away. Credit: NASA, ESA, and STScI.

Here we’re deep in the Large Magellanic Cloud. This is a visible-light image showing NGC 2014 and NGC 2020, which although appearing separate here, are part of a large star-forming region filled with stars much more massive than the Sun, many of them with lifetimes of little more than a few million years. Dominating the image, a group of stars at the center of NGC 2014 has shed the hydrogen gas and dust of stellar birth (shown in red) so that the star cluster lights up nearby regions in ultraviolet while sculpting and eroding the gas cloud above and to the right of the young stars. Bubble-like structures within the gas churn with the debris of starbirth.

At the left, NGC 2020 is dominated by a star 200,000 times more luminous than the Sun, a Wolf-Rayet star 15 times more massive than our own. Here the stellar winds have again cleared out the area near the star. According to the ESA/Hubble Information Center, the blue color of the nebula is oxygen gas being heated to 11,000 degrees Celsius, far hotter than the surrounding hydrogen gas. We should keep in mind when seeing such spectacular imagery that massive stars of this kind are relatively uncommon, but the processes at work in this image show how strong a role their stellar winds and supernovae explosions play in shaping the cosmos. 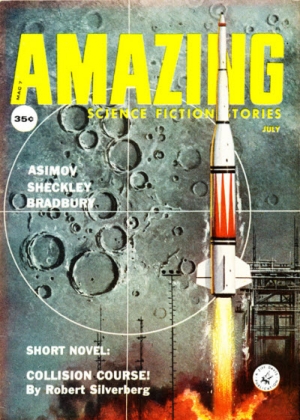 Inevitably I’m reminded of science fictional treatments of the Magellanics, especially Olaf Stapledon’s Star Maker (1937), in which a symbiotic race living in the Large Magellanic Cloud (LMC) is the most advanced life form in the galaxy. But let’s also remember that when Arthur C. Clarke’s starship leaves the Sun in Rendezvous with Rama (1973), it’s headed for the LMC. Among scores of other references, from Haldeman’s The Forever War to Blish’s Cities in Flight, I’m particularly fond of Robert Silverberg’s less known Collision Course, probably because a shorter version fired my imagination as a boy in a copy of Amazing Stories I still possess.

Image: The brilliant Cele Goldsmith was editing Amazing Stories by the time the July, 1959 issue containing “Collision Course” came out. The full novel would be published in 1961.

There is something about what you would see in the night sky from a satellite galaxy, as opposed to our own view of the Milky Way from within its disk, that fires the imagination. For an entirely different view of the galaxy, read Poul Anderson’s World Without Stars (1966), as discussed in these pages back in 2014 in The Milky Way from a Distance.