An Exposed Planetary Core at TOI-849

In exoplanet research, ‘deserts’ are regions where things are not found. Thus the Neptunian Desert, which is a zone close to a star where planets of Neptune size only rarely appear. Deserts like this (there is also a Brown Dwarf Desert that we’ve examined in earlier posts) raise questions because we don’t know why they occur. What is it we don’t understand about planet formation that accounts for the lack of Neptune-mass planets in 2-4 day orbits?

Exceptions tweak our thinking, and do have NGTS-4b, a world 20 percent smaller than Neptune and 20 times as massive as Earth in a 1.3-day orbit around a K-dwarf (see Into the Neptunian Desert for more on this one, which is now joined by an even more puzzling object).

For today we learn of the discovery of a world of roughly Neptune’s mass with an orbital period of a scant 18 hours, and researchers reporting the discovery in Nature suggest that we are actually looking at a ‘failed’ gas giant, an exposed planetary core. We can thank TESS (Transiting Exoplanet Survey Satellite) for the original data on this one, which is labeled TOI 849b. The object orbits a star much like our own about 730 light years from the Sun.

Follow-up observations with the HARPS spectrograph at ESO’s La Silla Observatory in Chile complement the TESS transit data with the radial velocity readings used to determine that the object is two to three times more massive than Neptune but also incredibly dense. It must, then, consist largely of iron, rock and water, with little hydrogen and helium. Physicist David Armstrong (University of Warwick), lead author of the paper on this work, describes the first intact exposed core of a gas giant found around a star:

“While this is an unusually massive planet, it’s a long way from the most massive we know. But it is the most massive we know for its size, and extremely dense for something the size of Neptune, which tells us this planet has a very unusual history. The fact that it’s in a strange location for its mass also helps — we don’t see planets with this mass at these short orbital periods. TOI 849 b is the most massive terrestrial planet — that has an Earth like density — discovered. We would expect a planet this massive to have accreted large quantities of hydrogen and helium when it formed, growing into something similar to Jupiter. The fact that we don’t see those gases lets us know this is an exposed planetary core.” 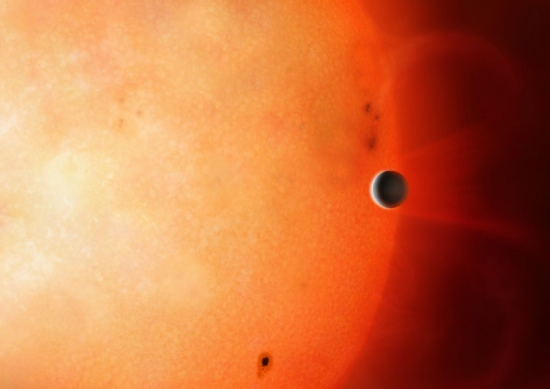 Image: Artist’s impression showing a Neptune-sized planet in the Neptunian desert. It is extremely rare to find an object of this size and density so close to its star. Credit: University of Warwick/Mark Garlick.

So is this really a ‘failed’ gas giant, or a gas giant that formed normally and then lost its gas envelope? If the latter, we could be looking at tidal disruption from the objects’ tight orbit, or even a collision with another planet. Photoevaporation of the atmosphere due to its position near the star is a contributing factor, but not one that fully accounts for the loss of gas.

If a failed gas giant, then in TOI 849 we would be looking at a world that never formed an atmosphere in the first place, with implications for the original protoplanetary disk. Christoph Mordasini (University of Bern) led the theoretical analysis of the discovery:

“Once the core of the gas giant formed then something very unusual could have happened and it never formed a massive atmosphere as normally. This could have occurred if there was a gap in the disk of dust and gas that the planet formed from due to gravitational interaction with the planet, or if the disk ran out of material right at the very moment when gas accretion normally follows.”

Thus the possible formation and evolution of TOI-849b, as shown below.

Image: The red line shows the evolutionary track of a simulated planet that finally has similar properties as the actual planet TOI-849b, as found in the Bern Model of planet formation and evolution. The track is shown in the plane of semimajor axis in astronomical units (AU), that is the orbital distance from the star, on the x-axis, and the radius of the planet in units of jovian radii on the y-axis. The blue-red points show other planets predicted by the model. The Earth and Jupiter are shown at their positions for comparison. The planet starts to form at the initial time t=0 years as a small planetary embryo at about 6 AU. The protoplanet grows in mass in the following 1 million year which increases its radius. In this phase, the radius of the planet is still very large, as it is embedded in the protoplanetary disk in which it forms. The increasing mass of the protoplanet causes it to migrate inwards, towards the star. This reduces again the size of the planet. After 3.5 million years, the planet has migrated to the inner edge of the disk.

There, it suffers a very energetic giant impact with another protoplanet in its planetary system. The enormous heat liberated in the collision strongly inflates the gaseous envelope of the planet. The envelope is lost via Roche-lobe overflow, and an exposed planetary core comes into existence. In the following billions of years, the exposed core slowly spirals towards its host star because of tidal interactions. The simulate planet now has properties like a mass, radius, and orbital distance which are very similar the observed properties of TOI-849b that is shown by a black-yellow symbol. In the end, after about 9.5 billion years, the planet falls into its host star. Credit: © Universität Bern / Christoph Mordasini / Physikalisches Institut, Weltraumforschung und Planetologie.

Whether a failed gas giant or a disrupted one, TOI-849b represents an exposed core, something we don’t see in our own Solar System, and it may provide insights into the interior of planets like Jupiter. Future measurements may pick up any trace atmosphere replenished from the core, which would give us data on the chemical composition of the intriguing object.