Have a look at what two of our older spacecraft saw on Jupiter’s giant moon Ganymede, a world that will snap into much greater focus once the JUICE mission arrives in 2029. The JUpiter ICy moons Explorer is slated for launch in 2022, with the intention of studying Ganymede, Callisto and Europa. But it’s Ganymede that will get the lion’s share of the attention from this European Space Agency effort as JUICE slides into orbit around the moon in 2032, marking the first time a spacecraft has orbited a moon circling a planet other than our own.

Image: Images of Ganymede’s surface taken by Voyager 2 (left) and Galileo (right). The Dark Terrain and Bright Terrain areas can be recognized, with concurrent furrows present in the Dark Terrains. Credit: NASA.

We looked at more recent Juno views of Ganymede just last month (see Glimpses of Ganymede), along with interesting results from its most recent flyby on disruptions in the crystalline structure of the moon’s north polar ice due to incoming plasma. Now we return to Jupiter space because of a new paper from Naoyuki Hirata (Kobe University) and colleagues that examines the orientation and distribution of tectonic troughs on Ganymede’s surface. Their concentric arrangement implies what may be the largest impact structure identified in the Solar System. The data used in the work come from both Voyagers and the Galileo spacecraft. 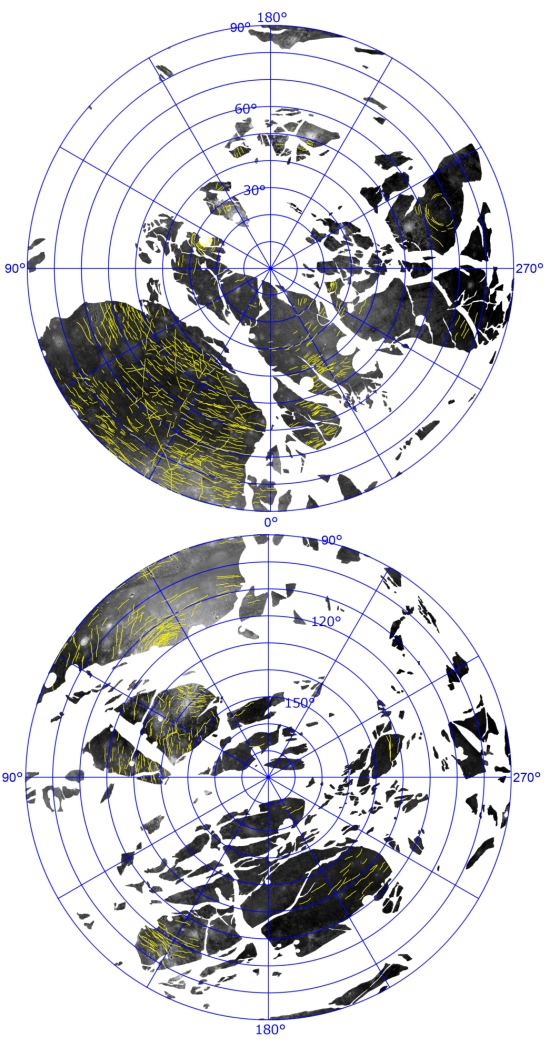 Almost all the furrows found in the spacecraft imagery are concentric rings aligned around a single point centered at 20°S 180°W, with the radial extent of the structures measuring 7800 kilometers. Bear in mind that the mean circumference of Ganymede is only 16,530 kilometers. If we really are seeing a crater here, it dwarfs Callisto’s 1900 kilometer crater, previously thought the largest in our system.

A 150 kilometer impactor would produce a melt pool with a radius of 1000 kilometers, a possible explanation for the central region of Ganymede’s Marius Regio, which is free of furrows. Usefully, the Hirata simulations lead to a prediction that we will soon be able to test. From the paper:

Our numerical impact simulation for the case of Rimp = 150 km (Rimp
=50 km) demonstrates the generation of a large melt region with a radius of ~1000 km (~500 km). This large melt region would allow the dense material to gravitationally segregate, which generate positive gravity anomaly such as mass concentrations seen on the lunar impact basins. Therefore, we predict that, if our view is correct, positive gravity anomaly with a radius of ~1000 km when Rimp = 150 km (or a radius of ~500 km when Rimp = 50 km) should exist around 20°S 180°W. This can be tested by future geodetic observations of Ganymede such as the JUICE (Jupiter Icy moon Explorer) or Europa Clipper mission. 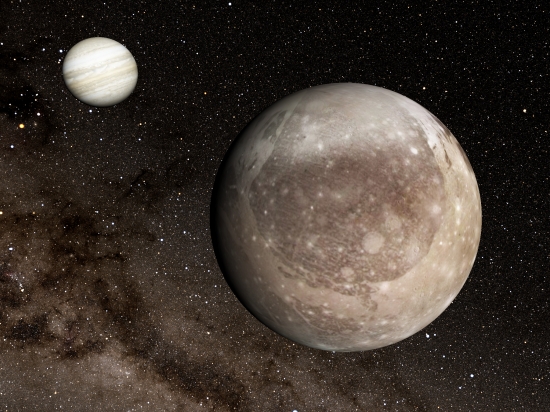