As it is considered a precursor installation, the Murchison Widefield Array (MWA) in Western Australia doesn’t get the press that its proposed successor, the Square Kilometer Array (SKA) regularly receives. That’s to be expected, given the scope of the SKA, which will involve telescopes in both Australia and South Africa. 14 member countries are developing a project that is to reach over a square kilometer of collecting area, containing thousands of dishes and up to a million low-frequency antennas. If it is built, SKA’s angular resolution and survey speed will allow surveys thousands of times faster than those now being conducted.

But the Murchison precursor is alive and well, working the 70–300 MHz range and mapping the radio sky. Established by a consortium of universities — MIT, Swinburne, Curtin and Australian National University — the telescope is located on a site selected by these universities and managed by Curtin University. CSIRO, Australia’s national science agency, would later take over management of the site, which also now houses their SKA precursor instrument, ASKAP.

The MWA may be 50 times less sensitive than the SKA, but it has been put to work in areas ranging from the heliosphere to neutral hydrogen emission from the early universe. Its remit also includes several SETI studies, the latest being a search in the area of the constellation Vela (originally part of the larger Argo Navis constellation). The International Centre for Radio Astronomy Research calls this latest survey “the deepest and broadest search at low frequencies for alien technologies.” The results are now in the books, as reported in Publications of the Astronomical Society of Australia.

“As Douglas Adams noted in The Hitchhikers Guide to the Galaxy, ‘space is big, really big’. And even though this was a really big study, the amount of space we looked at was the equivalent of trying to find something in the Earth’s oceans but only searching a volume of water equivalent to a large backyard swimming pool. Since we can’t really assume how possible alien civilisations might utilise technology, we need to search in many different ways. Using radio telescopes, we can explore an eight-dimensional search space. Although there is a long way to go in the search for extraterrestrial intelligence, telescopes such as the MWA will continue to push the limits—we have to keep looking.” 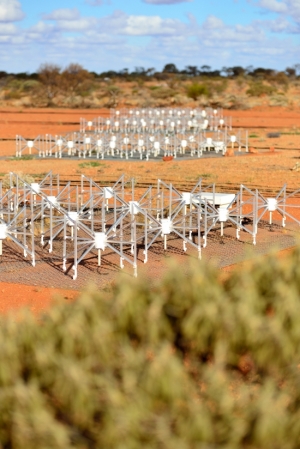 The scientists observed the sky in Vela for 17 hours, and point to the capabilities of the coming SKA, which if completed could be available late in this decade. SKA would extend the SETI search into billions of star systems, and would be capable of detecting what Tingay calls “Earth-like radio signals” from relatively nearby planetary systems, meaning, I assume, leakage radiation as opposed to directed signals designed to be interstellar. The current work follows earlier MWA surveys, one toward galactic center, the other in the anti-center direction.

Overall, our MWA surveys show the rapid progress that can currently be made in SETI at radio frequencies, using wide field and sensitive facilities, but also show that SETI surveys have a long way to go. The continued use of the MWA, and the future similar use of the SKA at much higher sensitivities, offers a mechanism to make significant cuts into the haystack fraction of Wright et al. (2018), while maintaining a primary focus on astrophysical investigations, making excellent commensal use of these large-scale facilities.

On the matter of ‘haystack fractions,’ the phrase comes from a 2018 paper from Jason Wright (Penn State) and co-authors (two students in a graduate SETI course taught by Wright), which attempts to calculate the total fraction of the ‘haystack’ that has been searched to date, producing a result not far off what Jill Tarter calculated back in 2010: “…our current search completeness is extremely low, akin to having searched something like a large hot tub or small swimming pool’s worth of water out of all of Earth’s oceans.“ Tarter’s comparison was to a drinking glass’s worth of seawater, so we’re in the same range.

Although I cited it in an earlier article (see Into the Cosmic Haystack) this quotation from the Wright et al. paper bears repeating:

We should be careful, however, not to let this result swing the pendulum of public perceptions of SETI too far the other way by suggesting that the SETI haystack is so large that we can never hope to find a needle. The whole haystack need only be searched if one needs to prove that there are zero needles—because technological life might spread through the Galaxy and/or technological species might arise independently in many places, we might expect there to be a great number of needles to be found. Also, our haystack definition included vast swaths of interstellar space where we have no particular reason to expect to find transmitters; humanity’s completeness to subsets of this haystack—for instance, for continuous, permanent transmissions from nearby stars—is many orders of magnitude higher.

Noting that “the dream of ‘all-sky, all the time” high bandwidth coverage is still worth pursuing, and singling out the Tingay et al surveys at the MWA in particular, Wright and colleagues say that surveys with large bandwidth, long exposures, repeat visits and good sensitivity allow for searches that are orders of magnitude faster than surveys without these qualities. Indeed, the three MWA low frequency surveys, because of their very wide field and sensitivity, dominate the haystack search volume, and as Wright notes, they did this in only a few hours of searching. The paper also notes how rapidly Breakthrough Listen is cutting into this search space, and that was before the most recent Breakthrough results were announced (see SETI: Going Deep with the Data Search). 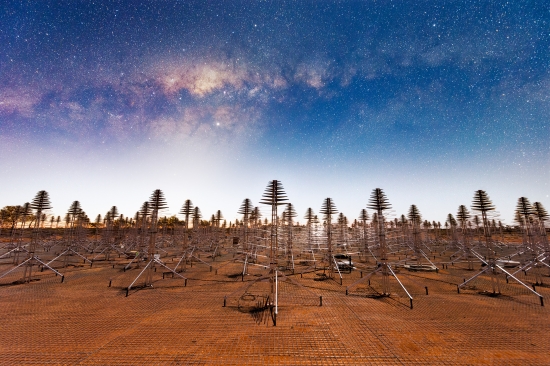 The paper is Tremblay and Tingay, “A SETI Survey of the Vela Region using the Murchison Widefield Array: Orders of Magnitude Expansion in Search Space”, Publications of the Astronomical Society of Australia September 8th, 2020 (abstract). The Wright paper is “How Much SETI Has Been Done? Finding Needles in the n-Dimensional Cosmic Haystack,” Astronomical Journal Vol. 156, No. 6 (14 November 2018). Abstract / Preprint.