I see that a white paper on Richard Linares’ interesting ‘statite’ concept became available just before Christmas, and I want to call your attention to it (and thanks to Antonio Tavani for the pointer). Back in April, the idea received funding as a Phase 1 study in the NASA Innovative Advanced Concepts (NIAC) Program, renewing attention on the matter of interstellar objects (ISO) like ‘Oumuamua. The notion is to deliver a payload to an object discovered entering our Solar System so that, unlike the two we’ve found thus far (‘Oumuamua and 2I/Borisov), we can examine them up close before they depart. Statites are to be the enabling technology.

So let’s circle back to that concept, for statites are getting more interest these days given the plans for Solar Cruiser, NASA’s solar sail mission that may experiment with maneuvers that allow it to act in non-Keplerian ways. The idea is that a solar sail can achieve ‘station-keeping’ — hovering in place — by using light pressure from the Sun to offset gravitational forces. That would allow what Robert Forward termed ‘displaced orbits.’ Forward envisioned what he called ‘polesitters,’ satellites that could, if positioned at high Earthly latitudes, offer telecommunications services through geosynchronous coverage of the polar regions.

Solar Cruiser could use these methods in its experiments to observe the Sun’s polar regions, though how much the statite idea would be explored during the mission is not yet determined. What Linares has in mind is the fact that it’s extraordinarily difficult to imagine a mission to catch an incoming interstellar asteroid or comet. Such objects show up suddenly and with high heliocentric velocities. A constellation of statites, however, located stationary in terms of the Sun, would make it possible to move quickly into the appropriate flyby or rendezvous trajectory. The payload can be quickly placed on a trajectory toward the Sun, using the sail and, perhaps, electric propulsion along the way for course adjustment.

Here’s how Linares and team describe the idea:

The proposed mission concept is to have a constellation of statites where: A) each statite enters into a stationary, “low-energy” state, which it can hold indefinitely, awaiting a potential ISO; B) once an ISO is detected, a flyby or rendezvous trajectory is calculated with an expected 4-16 months of lead time; C) a single statite releases a CubeSat which enters into a freefall trajectory with respect to the Sun or uses attitude control to orient the solar sail and adjust the solar radiation pressure force to accomplish a rendezvous; D) the CubeSat, which may use propulsion or the solar sail, then adjusts its trajectory for a flyby or rendezvous with the ISO; and E) onboard sensors are used to make critical scientific measurements. 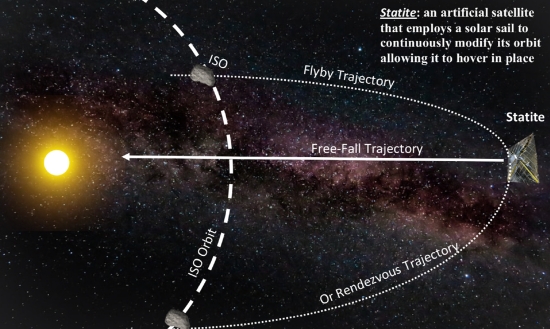 Image: To ensure the best coverage of the Solar System, MIT’s Richard Linares envisions a constellation of “statites” that communicate and work together, activating the statite in the optimum position to fly by or rendezvous with an interstellar object. Other statites in the constellation can continue to wait for the next ISO to appear. Credit: Linares et al.

So we use solar photons and the momentum they impart to cancel the Sun’s gravitational force, enabling a constellation of statites that can hover in place indefinitely. The effort takes shape under the umbrella of what Linares describes as a “dynamic orbital slingshot for rendezvous with interstellar objects.” We learn from the white paper that the NIAC work will take in the design of a statite constellation and its configuration, as well as its capability for achieving rapid rendezvous. The potential of added solar electric propulsion will be considered as a way of improving performance, while scientific instruments and operational factors will be analyzed.

And when an incoming interstellar object is detected? The levitating sail has an inertial velocity of zero, and when released from ‘hover,’ it enters a Keplerian orbit. In the example given in the paper, a statite at 1 AU has a free-fall trajectory of 64 days. The choice of the term ‘slingshot effect’ is dictated by the fact that the sail is essentially being used to store energy that is released when needed, with the free-fall path to solar flyby adjusted along the way. Linares’ simulations show effective rendezvous with our two previous interstellar visitors:

The paper argues that a statite free-falling toward the Sun from an initial position at 1 AU and then deploying its sail away from the Sun at perihelion can achieve speeds of up to 25 AU/year, making it possible to deliver payloads to the outer Solar System. Voyager 1 has reached 3.6 AU per year by comparison, making the statite concept attractive beyond its value as a station-keeper for quick response missions to interstellar comets/asteroids.