TESS, our Transiting Exoplanet Survey Satellite, continues to roll up interesting planet candidates, with over 2450 TESS Objects of Interest (TOI) thus far identified. The one that catches my eye this morning showed up in the lightcurve of TOI-1259A, a K-dwarf some 385 light years away. The planet designated TOI-1259Ab is Jupiter-sized but some 56 percent less massive, with a 3.48 day orbit at 0.04 AU, and an equilibrium temperature of 963 K.

This system gets interesting, though, not so much for the planet but the other star, a white dwarf (TOI-1259B) in a wide orbit at 1648 AU from the K-dwarf. A team of astronomers led by David Martin (Ohio State University) finds an effective temperature of 6300 K, a radius of 0.013 solar radii and a mass of 0.56 solar masses, a set of characteristics that allow the team to estimate that the system is just over 4 billion years old. 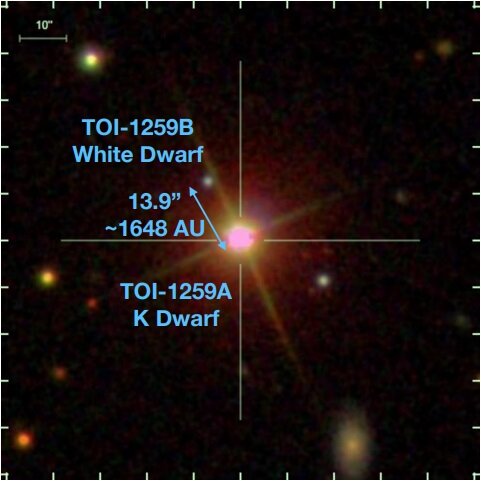 Let’s home in on the issue of white dwarfs, for they force a significant question: How does the evolution of a star affect the evolution of the planetary system around it? The system containing TOI-1259Ab may prove useful in helping us understand the processes at work.

But first, what about white dwarfs themselves? A star like the Sun will expand into a red giant perhaps five billion years from now, ultimately leaving a white dwarf remnant, with whatever planetary survivors still intact left transformed by the process.

So it’s not surprising that about 50 percent of the white dwarfs studied show atmospheres polluted by heavy elements. That would be an indication of material from the surrounding system accreting onto the white dwarf. Still noteworthy, though, is the fact that you would expect such heavy elements to settle out in the presence of the white dwarf’s high gravity. The process of accretion must, then, be relatively common, allowing the stellar atmosphere to be constantly replenished.

White dwarfs produce their own set of challenges when it comes to exoplanet discovery. Finding planets around them is relatively rare. From the paper on the TOI-1259Ab work, I learned that these stars show a lack of the kind of sharp spectral features that would allow precise characterization using radial velocity methods. The push and pull of orbiting worlds is less evident than it would be around other classes of star.

That seems to throw us back on transit methods, something both Kepler and TESS turned into an art, but here we’re dealing with the problem that white dwarfs have a small radius. They’re roughly the size of the Earth, which means that transit probabilities are reduced and so are transit durations. Moreover, according to Martin et al., white dwarfs are faint enough that their light curves are noisy, a problem for astrometric methods — think Gaia — as well.

So while we’ve found atmospheric pollutants at these stars, and have tagged transits of planetary debris, the first confirmed planet orbiting a white dwarf wasn’t found until recently (for more on WD 1856+534, see On White Dwarf Planets as Biosignature Targets).

But back to TOI-1259Ab, which is not a white dwarf planet, but a tightly orbiting Jupiter-sized planet around a K-dwarf. Here the white dwarf is a distant but definitely bound second star. It turns out that even systems with planets and white dwarf companions are rare, as the paper notes:

Only a few bona fide planets have been discovered with degenerate outer companions (Table 2), the first being Gliese-86b (Queloz et al. 2000; Els et al. 2001; Lagrange et al. 2006). Mugrauer (2019) found 204 binary companions in a sample of roughly 1300 exoplanet hosts, of which eight of the companions were white dwarfs. Mugrauer & Michel (2020) found five white dwarf companions to TESS Objects of Interest, including TOI-1259, but without radial velocity data to confirm the TOIs as planets. Some of these planets were also in the El-Badry & Rix (2018) catalogue.

Stellar systems that include white dwarfs have much to teach us, and in the case of TOI-1259Ab, we have a world that has now been confirmed through radial velocity follow-up, and a white dwarf that influenced it. Driving this research forward will be the question of how systems with a degenerate outer companion object evolve, for there are implications here for planetary dynamics. This system should be an interesting target for the James Webb Space Telescope. Consider: The transit depth is 2.7 percent on the K-dwarf host star, which is 0.71 percent of the Sun’s radius. Moreover, its location places the system near the TESS and JWST continuous viewing zones.

The authors believe that the white dwarf in this system is far enough from the K-dwarf that it would not affect the formation of planets, but go on to point out that while it was on the main sequence, it progenitor star would have been both more massive and also closer, which would have made it a factor in orbital dynamics for TOI-1259Ab. The planet’s tight orbit may thus be at least partially the result of migration forced by the now degenerate white dwarf companion.

On the matter of stellar age, it’s worth noting that white dwarfs cool steadily as they age, which helps astronomers constrain the age of the star and the system around it using its temperature and luminosity. Let me quote the paper on this, because star age is so tricky to determine for other stellar types:

If the WD’s mass is known, the initial mass of its progenitor star can be inferred through the initial-final mass relation (IFMR), and this initial mass constrains the pre-WD age of the WD progenitor. Therefore if we have a well-constrained distance to the WD then its total age, i.e. the sum of its main sequence lifetime and its cooling age, can be robustly measured from its spectral energy distribution (SED). Under the reasonable ansatz that the WD and K dwarf formed at the same time, we can then measure the total system age from the WD.

Another useful insight offered by white dwarfs, the study of which may help us explain unusual system architectures like this one, as well as informing us on outcomes as stars and their companions are transformed over time.

The paper is Martin et al., “TOI-1259Ab – a gas giant planet with 2.7% deep transits and a bound white dwarf companion,” submitted to Monthly Notices of the Royal Astronomical Society (preprint).