A Chronological Look at a Transiting Earth

Call it the Earth Transit Zone, that region of space from which putative astronomers on an exoplanet could see the Earth transit the Sun. Lisa Kaltenegger (Cornell University) is director of the Carl Sagan Institute and the author of a 2020 paper with Joshua Pepper (LeHigh University) that examined the stars within the ETZ (see Seeing Earth as a Transiting World).

While Kaltengger and Pepper identified 1004 main sequence stars within 100 parsecs that would see Earth as a transiting planet, Kaltenegger reminds us that stars are ever in motion. Given the abundant resources available in the European Space Agency’s Gaia eDR3 catalog, why not work out positions and stellar motions to examine the question over time? After all, there are SETI implications here. We study planetary atmospheres using data taken during transits. Are we, in turn, the subject of such study from astronomers elsewhere in the cosmos?

Thus Kaltenegger’s new paper in Nature, written with Jackie Faherty (American Museum of Natural History), which identifies 2,034 nearby star systems (within the same 100 parsecs, or 326 light years) that either could have seen the Earth transiting by observing our Sun within the last 5,000 years or will be able to within the same span of time going forward. Kaltenegger takes note of the dynamic nature of the dataset:

“From the exoplanets’ point-of-view, we are the aliens, we wanted to know which stars have the right vantage point to see Earth, as it blocks the Sun’s light. And because stars move in our dynamic cosmos, this vantage point is gained and lost.” 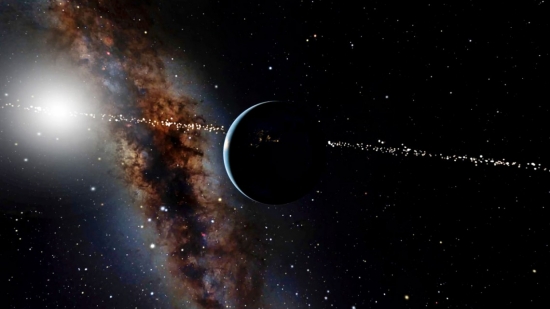 Image: With the plane of the Milky Way galaxy seen stretching from the top to the bottom of the image, this artistic view of the Earth and Sun from thousands of miles above our planet, shows that stars (with exoplanets in their own system) can enter and exit a position to see Earth transiting the Sun. Credit: Kaltenegger & Faherty/Cornell University.

Looking at the results more closely, we find 117 stars over the 10,000 year window that are within 100 light years of our Solar System, while 75 of these stars have been in the Earth Transit Zone since the advent of commercial radio roughly 100 years ago. From the paper:

Among those sources, 29 were in the ETZ in the past, 42 will enter it in the future, and 46 have been in the ETZ for some time. These 46 objects (2 F, 3 G, 2 K and 34 M stars and 5 WDs [white dwarfs]) would be able to see Earth transit the Sun while also being able to detect radio waves emitted from Earth, which would have reached those stars by now… Seven of the 2,034 stars are known exoplanet host stars… Four of the planet hosts are located within 30 pc of the Sun.

It’s intriguing to look at some well known systems in this context. Trappist-1, for example, with its seven transiting worlds, will not enter the Earth Transit Zone for 1,642 years, but once within it, will have the ability to see a transit for 2,371 years.

In fact, even the closest stars tend to spend a millennium or more in the ETZ once there, plenty of time for extraterrestrial astronomers, if such exist, to take note of biological and/or technological activity on our world. Ross 128 is another interesting system. Here we have the second-closest known possibly temperate exoplanet after Proxima b, orbiting a red dwarf in Virgo about 11 light years out. Denizens of this world had a 2,158 year window they entered about 3,057 years ago but moved out of 900 years ago.

As I’m curious about unusual venues for potential life, I found this interesting:

109 of the objects in our catalogue are WDs, dead stellar remnants. Whereas most searches for life on other planets concentrate on main sequence stars, the recent discovery of a giant planet around a WD opened the intriguing possibility that we might also find rocky planets orbiting evolved stars. Characterizing rocky planets in the HZ of a WD would answer intriguing questions on lifespans of biota or a second ‘genesis’ after a star’s death.

It should come as no surprise that Kaltenegger and Faherty find M dwarfs dominating the spectral types, given their wide distribution n the galaxy; 1,520 of these stars are M-dwarfs. They also find 194 G-class stars like the Sun and a range of other stellar types, of which 102 are K-class stars like Alpha Centauri B. At the present time, 1,402 stars within the 100 parsec bubble can see Earth as a transiting world. Early observations of stars in the ETZ have begun via Breakthrough Listen as well as the Five-hundred-meter Aperture Spherical radio Telescope (FAST) in China.

While technological activity may be difficult to observe, the authors point out that Earth’s biosphere has been at work on its atmosphere for billions of years, meaning observations of Earth transits would have identified it as a living world ever since the Great Oxidation Event. A transiting Earth’s biosignature should be hard to miss.

Previous post: Mixing and Growth in the Sun’s Protoplanetary Disk