Interesting Transient: A New Class of Object toward Galactic Center?

The 36 dish antennae at ASKAP — the Australian Square Kilometre Array Pathfinder in outback Western Australia — comprise an interferometer with a total collecting area of about 4,000 square meters. ASKAP has commanded attention as a technology demonstrator for the planned Square Kilometer Array, but today we’re looking at the discovery of a highly polarized, highly variable radio source labeled ASKAP J173608.2−321635, about 4 degrees from galactic center in the galactic plane.

According to Ziteng Wang, who is lead author of the study on this signal and a University of Sydney PhD student, the observations are strikingly different from other variable radio sources:

“The strangest property of this new signal is that it has a very high polarisation. This means its light oscillates in only one direction, but that direction rotates with time. The brightness of the object also varies dramatically, by a factor of 100, and the signal switches on and off apparently at random. We’ve never seen anything like it.”

Variable celestial objects are common enough, from supernovae to pulsars, not to mention interesting sources like Fast Radio Bursts and, of course, the Cepheid variable stars that have played such a large role in astronomical history in helping us determine the scale of the universe. Any new variable source might be looked upon in light of such objects, perhaps as a type of flare star intermittently spewing out bursts of radiation. But none of these match the odd behavior of the new source. While J173608.2−321635 was found at ASKAP, Wang and team performed follow-up observations with the MeerKET telescope in South Africa.

So we have a source toward galactic center that is at first unseen, then brightens, fades, and reappears. Having detected six such signals from the source over nine months in 2020, the astronomers searched in vain for it in visible light, even as a search with the Parkes radio telescope turned up nothing. That’s when the team turned to MeerKAT, where it was once again detected. Tara Murphy, who is Wang’s PhD supervisor at Sydney, notes what happened next:

“Because the signal was intermittent, we observed it for 15 minutes every few weeks, hoping that we would see it again. Luckily, the signal returned, but we found that the behaviour of the source was dramatically different — the source disappeared in a single day, even though it had lasted for weeks in our previous ASKAP observations.” 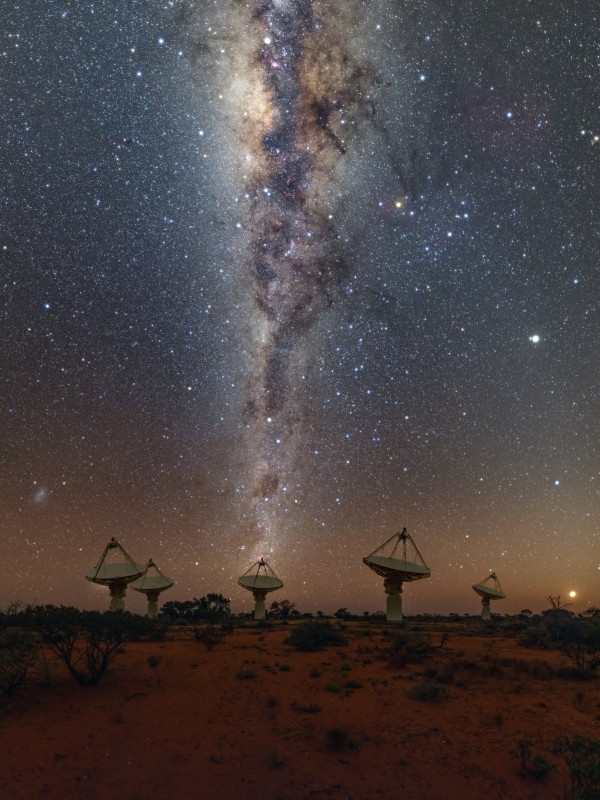 Other low frequency transients from galactic center have been detected in recent years, including GCRT J1745-3009, which was quickly labeled a ‘burper’ by its discoverers due to its intermittent bursts after detection in 1998. Five bursts of equal brightness were noted, each about ten minutes in duration, and occurring every 77 minutes. No explanation has been agreed upon for that one either, although a pulsar, a neutron star pair, or a radio-emitting white dwarf have all been discussed in the literature.

For the ASKAP transient, the authors have considered pulsar scenarios, a transient magnetar, and “a low-mass star/substellar object with extremely low infrared luminosity,” with none of these providing a satisfactory answer. The suspicion grows that this is a new class of objects that future radio imaging surveys will observe as our capabilities improve. With the Square Kilometer Array coming online in the next decade, we are probably looking at a phenomenon that will generate a great deal of study and, doubtless, many more examples.

Next post: A Jupiter-class Planet Orbiting a White Dwarf