BLC1: The ‘Proxima Signal’ and What We Learned

If we were to find a civilization at Proxima Centauri, the nearest star, it would either be a coincidence of staggering proportions — two technological cultures just happening to thrive around neighboring stars — or an indication that intelligent life is all but ubiquitous in the galaxy. ‘Ubiquitous’ could itself mean different things: Many civilizations, scattered in their myriads amongst the stars, or a single, ancient civilization that had spread widely through the galaxy.

If a coincidence, add in the time factor and things get stranger still. For only the tiniest fraction of our planet’s existence has been impinged upon by a tool-making species, and who knows what the lifetime of a civilization is? Unless civilizations can live for eons, how could two of them be found around stars so close? Thus the possibility that BLC1 — Breakthrough Listen Candidate 1 — was a valid technosignature at Proxima Centauri was greeted with a huge degree of skepticism within the SETI community and elsewhere. 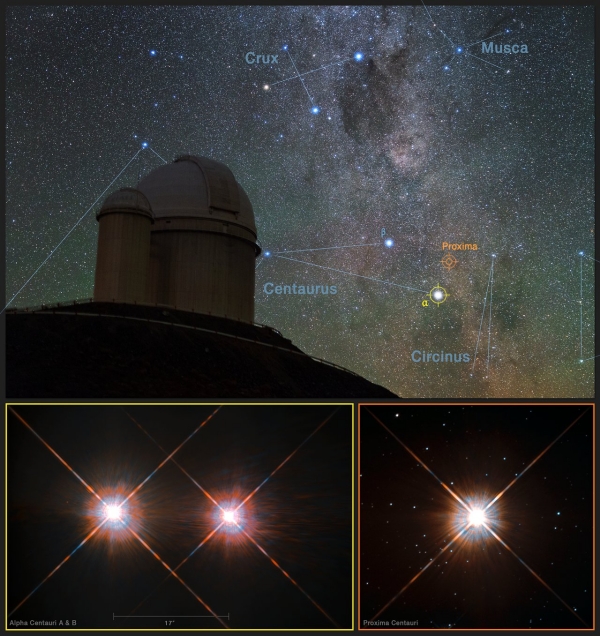 Image: This picture combines a view of the southern skies over the ESO 3.6-metre telescope at the La Silla Observatory in Chile with images of the stars Proxima Centauri (lower-right) and the double star Alpha Centauri AB (lower-left) from the NASA/ESA Hubble Space Telescope. Proxima Centauri is the closest star to the Solar System and is orbited by the planet Proxima b, which was discovered using the HARPS instrument on the ESO 3.6-metre telescope. Credit: Y. Beletsky (LCO)/ESO/ESA/NASA/M. Zamani.

But it was a good idea to look, because you don’t know what you’re going to find until you take the data, which is why SETI happens. While a great deal of attention has focused on the Alpha Centauri stars as targets for a future space probe, little attention has been paid to them in SETI terms. The southern hemisphere sky was examined by Project Phoenix in the 1990s (202 main sequence stars) and a second search, conducted by David Blair and team, likewise used the Parkes radio telescope in Australia to cover another 176 bright southern stars in that decade. Neither of these searches took in Proxima Centauri, which is, after all, a very faint M dwarf.

The discovery of Proxima Centauri b, a habitable zone world, brought new attention to the dim star. When the Parkes Observatory was turned toward Proxima Centauri in 2019 as part of the activities of Breakthrough Listen, the system received a thorough examination. We learn in two new papers in Nature Astronomy just how thorough:

We searched our observations towards Prox Cen for signs of technologically advanced life, across the full frequency range of the receiver (0.7–4.0 GHz). To search for narrowband technosignatures we exploit the fact that signals from any body with a non-zero radial acceleration relative to Earth, such as an exoplanet, solar system object or spacecraft, will exhibit a characteristic time-dependent drift in frequency (referred to as a drift rate) when detected by a receiver on Earth. We applied a search algorithm that detects narrowband signals with Doppler drift rates consistent with that expected from a transmitter located on the surface of Prox Cen b…Our search detected a total of 4,172,702 hits—that is, narrowband signals detected above a signal-to-noise (S/N) threshold—in all on-source observations of Prox Cen and reference off-source observations. Of these, 5,160 hits were present in multiple on-source pointings towards Prox Cen, but were not detected in reference (off-source) pointings towards calibrator sources; we refer to these as ‘events.’ 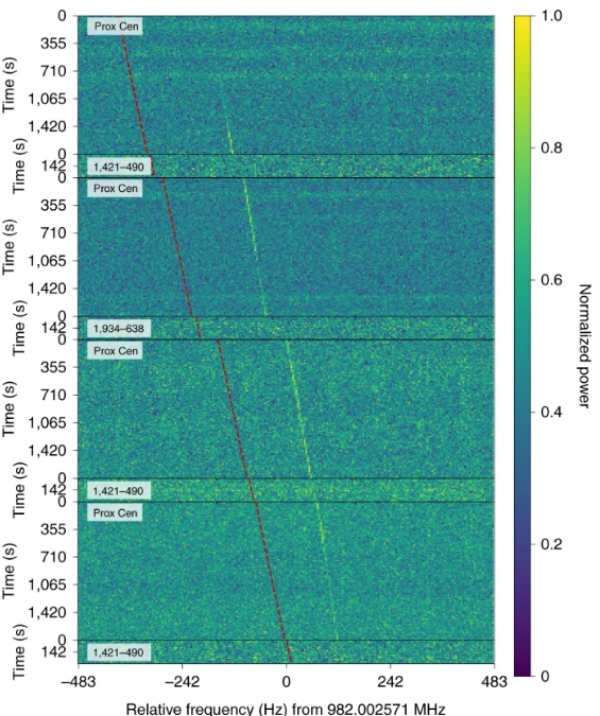 Image: This is Figure 4 from et al. (citations below). Caption: The signal of interest, BLC1, from our search of Prox Cen. Here, we plot the dynamic spectrum around the signal of interest over an eight-pointing cadence of on-source and off-source observations. BLC1 passes our coincidence filters and persists for over 2 h. The red dashed line, purposefully offset from the signal, shows the expected frequency based on the detected drift rate (0.038 Hz s−1) and start frequency in the first panel. BLC1 is analysed in detail in a companion paper. Credit: Smith et al./Breakthrough Listen.

In other words, a technosignature at Proxima Centauri, if actually there, should disappear depending on whether or not the telescope is pointing directly at the target system, which is how all but 5,160 hits were eliminated. The BLC1 signal made it through subsequent examination partly because it did not lie within the frequency range of local radio-frequency interference. The authors like to refer to it as a ‘signal of interest’ rather than a ‘candidate’ signal, but accept the BLC1 nomenclature because it is so widely adopted in coverage of the event.

BLC1 was a narrowband signal, which screened out natural astrophysical sources, and intriguingly, it persisted for several hours, much longer than would be accounted for by a passing aircraft or satellite. Moreover, it showed a drift rate that one would expect from a transmitter not on Earth’s surface, one that changed smoothly over time, “as expected for a transmitter in a rotational/orbital environment.” So you can see why it merited a deeper look.

As presented in the two Nature Astronomy papers, that second look has proceeded in the hands of Sofia Sheikh and colleagues at the University of California Berkeley. The scientists have examined archival observations of the Proxima Centauri system using an analysis thoroughly explained in the second of the two papers, one that included, in addition to drift rate study, a search for reappearances of the signal on other days and at other frequencies.

That involved searching for other signals near 982 MHz, where BLC1 appeared, looking first for signals with the same frequency and drift, and moving on to other frequencies (I’m simplifying mercilessly here — see the paper for the intricacies of the analysis). We wind up with a population of BLC1 look-alike signatures that, unlike BLC1, also appear when the telescope is not directly pointed at Proxima Centauri. The authors find every one of these to be caused by radio frequency interference, and determine that BLC1 is consistent with this population of look-alikes in terms of absolute drift rate, frequency and signal to noise ratio. Thus:

Using this procedure, we find that blc1 is not an extraterrestrial technosignature, but rather an electronically drifting intermodulation product of local, time-varying interferers aligned with the observing cadence.

That’s a useful and not unexpected finding, but the value of BLC1 is apparent. It has allowed scientists to develop a set of procedures for the analysis of technosignatures which were fully deployed here and explored in the papers. Sheikh and team have developed a technosignature verification framework built around this, the first signal of interest from Breakthrough Listen that required exhaustive investigation to rule out an alien technology. The value of that for future SETI work should be obvious:

…this signal of interest also reveals some novel challenges with radio SETI validation. It is well understood within the community that single-dish, on–off cadence observing could lead to spurious signals of interest in the case in which the cadence matches the duty cycle of some local RFI. The blc1 signal provided the first observational example of that behaviour, albeit in a slightly different manner than expected (variation of signal strength over position and time, which changed for each lookalike within the set). This case study prompts further application of observing arrays, multi-site observing and multi-beam receivers for radio technosignature searches. For future single-dish observing, we have demonstrated the utility of a deep understanding of the local RFI environment. To gain this understanding, future projects could perform omnidirectional RFI scans at the observing site, record and process the data with instrumentation with high frequency resolution such as the various BL backends, and then use narrowband search software such as turboSETI to obtain a population with which to characterize the statistics (in frequency, drift, power, duty cycle and so on) of local RFI.

The 10-part technosignature verification framework appears at the end of the Sheikh paper and summarizes both what BLC1 taught us through this analysis, but also how we can proceed more efficiently with persistent, narrowband technosignature searches in the future. I would say that’s a good outcome, one that moves the field forward thanks to this unusual detection.