How do you build an interstellar solar sail? Back in the 1980s, two studies of sail design set parameters that before then had remained largely unanalyzed. Gregory Matloff and Eugene Mallove were able to show in their papers “Solar Sail Starships: Clipper Ships of the Galaxy” and the later “The Interstellar Solar Sail: Optimization and Further Analysis,” that a so-called ‘sundiver’ trajectory coud produce exit velocities from the Solar System on the order of 1000 kilometers per second, even for large payloads. Both papers appeared in the Journal of the British Interplanetary Society, which remains the leading venue for interstellar studies.

A sundiver maneuver is tricky stuff; the spacecraft is established on a hyperbolic solar orbit that swings close to the Sun; at perihelion (closest approach), the sail is exposed to sunlight (having, perhaps, been shielded until now by an occulting object, such as a small asteroid). Make the sail reflective enough and the accompanying linkages to its payload strong enough and you’ve got a vehicle that could reach Alpha Centauri in a millennium. This is more or less state of the art for manned starship conjecture — the classic paper is by Alan Bond and Anthony Martin, “Worldships: Assessment of Engineering Feasibility,” which appeared in JBIS in 1984 (Vol. 37, pp. 254-256). 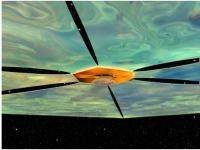 These concepts have not been forgotten by interstellar theorists, but recent work has focused on missions to nearby interstellar space. Aurora, for example, was a sail design for a mission to the near interstellar medium at about 200 AU from the Sun; it followed previous studies by Claudio Maccone and colleagues of a probe to the Sun’s gravitational focus at 550 AU.

For its part, NASA began investigating a near-term solar sail mission to the heliopause in 1998, reaching speeds of 50 kilometers per second with a boost from a close pass by the Sun. And in a 2003 paper, Gregory Matloff and Travis Taylor presented a proposal for an Oort Cloud Explorer mission that would reach the domain of the long-period comets. The Matloff/Taylor sail would be a 681-meter object that would use four smaller, attached 5-meter sails for attitude control, with a 150 kilogram payload. The authors believe that a close solar approach could result in a mission time of roughly 100 years, taking the vehicle to the outer edge of the Oort Cloud.

In the forseeable future, the solar sail may…see application to the exploration of nearby interstellar space rather than neighboring stellar systems. As well as expanding the radius of human exploration to 1,000 — 10,000 AU, the interstellar solar sail can serve as a test bed for concepts relating to interstellar beamed sailing. Sailcraft materials and structures will have commonalities in both approaches and can be tested in solar sailors long before beam projectors and power stations are constructed and deployed in solar space.

Centauri Dreams note: The use of laser or other forms of beamed propulsion to drive a ‘lightsail’ takes us beyond the conventional solar sail and ramps up the possibilities for missions to other stars. Matloff notes that even low-power beam projectors may help with nearby interstellar missions like the Oort Cloud Explorer by providing an extra push to the vehicle as it approaches the Sun, thus boosting its exit speed out of the Solar System. Such missions would be valuable testbeds for the larger beamed energy facilities that may one day get a lightsail to Alpha Centauri.

Matloff and Taylor’s paper “From the Sun to Infinity” is found in CP664, Beamed Energy Propulsion: First International Syposium on Beamed Energy Propulsion, ed. A.V. Pakhomov (American Institute of Physics, 2003). Matloff and Mallove’s “Solar Sail Starships: Clipper Ships of the Galaxy” appeared in JBIS 34 (1981), pp. 371-380. Their “The Interstellar Solar Sail: Optimization and Further Analysis” appeared in JBIS 36 (1983), pp. 201-209. Both are now considered landmarks in the field of interstellar mission studies.