A Major Hubble Survey of the Kuiper Belt

You’ll recall that well before New Horizons completed its primary mission at Pluto/Charon, the search was on for a Kuiper Belt Object that could serve as its next destination. Eventually we found Ultima Thule (2014 MU-69), from which priceless data were gathered at the beginning of January. Finding the target wasn’t easy given the distances involved and the small size of the relevant objects, which is why the Hubble Space Telescope was brought into the search.

The starfield in Sagittarius is crowded as we look toward galactic center, but despite the efforts of both the 8.2-meter Subaru telescope in Hawaii and the 6.5-meter Magellan telescopes in Chile, no KBOs among those found were within range of New Horizons. It was Hubble that made the difference, and Hubble which will presumably return a second target, if indeed the New Horizons team is granted an extended mission that can reach it. It’s worth noting, too, that it was Hubble that helped New Horizons in its discovery of Pluto’s smaller four moons, while also performing searches of the system for any dust rings that could harm the mission.

KBOs have never been heated by the Sun, so they provide the most pristine sample available of the earliest days of system formation. What we’ve learned about the Kuiper Belt so far is that there are a large number of binary objects within it, and as Southwest Research Institute scientist Alex Parker notes, many of these consist of two objects of similar mass. Parker will lead a new survey on the Kuiper Belt awarded to SwRI by the Space Telescope Science Institute (STScI), one that will put the emphasis on characterizing these binary populations.

“These binary systems are powerful tracers of the processes that built the planets,” says Parker. “We will use Hubble to test the theory that many planetesimals formed as binary systems from the get-go, and that today’s Kuiper Belt binaries did not come from mergers of initially solitary objects.” 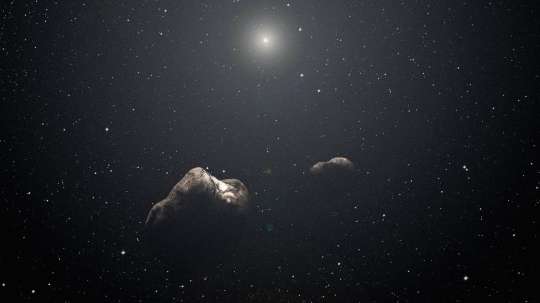 Image: The SwRI-led Origins Legacy Survey will search for Kuiper Belt objects such as those shown in this artist’s illustration of a widely separated binary. Credit: Courtesy of Southwest Research Institute and Alex H. Parker.

Called the Solar System Origins Legacy Survey (SSOLS), the project represents the largest Hubble Solar System program ever, with 206 Hubble orbits around Earth allocated to it. SSOLS is conceived as a way to examine the primordial planetesimal disk with new and archival data. At stake are differing models of planetesimal formation, which predict different size and color distributions for solitary KBOs and their binary cousins.

The process of accretion would imply objects formed in isolation, later merging into binaries. In this case, the objects in binary systems would likely show dissimilar colors and a different size distribution than single KBOs. But if a process of rapid collapse was at work, producing some binary systems and some single KBOs quickly, then the expectation is for both objects in a binary system to have a similar surface color and a size distribution similar to what we find among solitary objects. At present, Hubble is the only instrument that can measure the binary occurrence rate in the Kuiper Belt, as well as the binary separation and color distribution.

SSOLS will characterize the binary and color properties of 221 KBOs, drawing on objects observed by the two largest Kuiper Belt surveys yet conducted, the Outer Solar System Origins Survey (OSSOS) and Canada-France Ecliptic Plane Survey (CFEPS). This earlier work becomes the framework within which the binary characterization of KBOs can proceed. For more, see the SSOLS website at https://www.ssols.space/, and ponder the need for the next outer system spacecraft that can take us into the realm New Horizons continues to explore.