An Australian amateur astronomer named Thiam-Guan Tan has made a name for himself in the realm of exoplanets. Tan participated in the discovery of an exoplanet that may orbit within its star’s habitable zone. LHS 1140 b is a super-Earth some 41 light years from Earth that orbits a red dwarf star. Back in September of 2016, with a number of professional observatories looking at the host star, Tan provided key data to help verify the existence of LHS 1140b.

“It was fortunate that I was able to catch a transit,” said Tan, a retired engineer with a 12-inch telescope who has also discovered several supernovae. He is quoted in a newspaper called The West Australian as saying “That night, the Centre for Astrophysics had lined up five other telescopes across Australia and Hawaii to observe but they were all clouded out.” Tan’s work with exoplanet transits continues, an illustration of the role that talented amateurs with affordable equipment (Tan’s telescope cost $15,000) can play.

Image: Thiam-Guan Tan with his telescope. Tan notes that “A couple of sources of encouragement were The Discovery of Extrasolar Planets by Backyard Astronomers (Castellano & Laughlin, 2002) and Bruce Gary’s book Exoplanet Observing for Amateurs. Credit: Thiam-Guan Tan.

In the same vein, I’ve been looking at a project called the Habitable Exoplanet Hunting Project, emerging under the guidance of coordinator Alberto Caballero, himself a dedicated amateur astronomer in Spain who is visible on YouTube through his efforts on The Exoplanets Channel. The idea of the new project is to help amateurs discover more exoplanets in the habitable zone, restricting the search to G-, K-, and M-class stars that show low flare activity. The stars examined by the project are all known to have transiting exoplanets outside the habitable zone, and all are within 100 light years of the Sun. 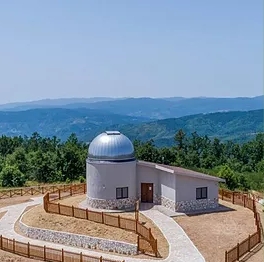 How to find out whether there are as yet undetected planets around such stars? Caballero looked at the amateur astronomers involved in TRESCA (Transiting ExoplanetS and CAndidates), a group organized by the Variable Star and Exoplanet Section of the Czech Astronomical Society comprising 191 observatories. He also consulted the American Association of Variable Star Observers (AAVSO) in his quest to find amateurs willing to participate in a global venture, one that could monitor specific stars at a predetermined time each week. Needless to say, the more volunteer astronomers, the better.

By gathering data 24 hours a day, seven days a week, the team hopes to monitor individual targets when a transit of a habitable zone planet could occur. 32 participating amateur observatories are already onboard as the project comes online, and Caballero notes that southern sky coverage would be particularly welcome as the effort builds. You can see photos of the participating sites, some of which are quite impressive, here.

There is no shortage of targets. Among M-dwarfs, the most numerous nearby stars, there are almost 2,000 within 100 light years, and Caballero says that amateur equipment is capable of detecting habitable zone planets like the super-Earth around LHS 1140b, with a transit depth of 0.6%, as well as smaller worlds.

Caballero likewise counts 508 G-class stars within the same 100 light year radius, and well over 900 non-flare K-class stars as well. He believes that as many as 25 habitable zone planets may be discovered using these methods, if a large enough telescope network can be implemented. The chart below, showing 10 non-flare G-, K-, and M-class stars within 100 light years with known transiting exoplanets (as of March, 2019) is drawn from the project’s website. 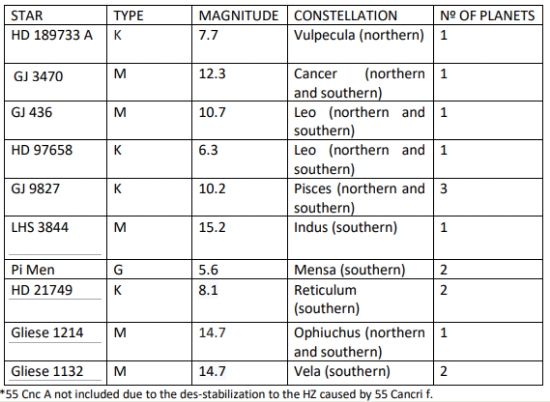 The Habitable Exoplanet Hunting Project assumes that each amateur astronomer would need to gather data from the target star about one hour per week, provided an early goal in the range of 200 observatories can be reached. From the project’s website:

M-dwarfs would seem to be prime target stars for an effort like this because habitable zone planets are going to be close enough to the host to have short orbital periods, with high transit depth, but Caballero told Jamie Carter in this article in Forbes that his team favors K-class stars, which emit lower UV and X-ray radiation than the average G star (like the Sun), and also have a longer lifetime. It’s a telling reminder that an Earth ‘twin’ may actually orbit a slightly different kind of star, where conditions for habitability could be better than here.

Caballero’s short video explains what the project hopes to accomplish, and he tells me the network will begin a campaign on GJ 3470 some time in January. Here we have a known mini-Neptune of about 14 Earth masses with a radius 4.3 times that of Earth, orbiting a star in the constellation Cancer. So far it’s the only planet known around this M-dwarf, in a tight orbit whose proximity to the host, in addition to its size, precludes habitability (in fact, its atmosphere seems to be evaporating). GJ 3470 thus offers an ideal chance for the Habitable Exoplanet Hunting Project to show what it can do even as it enjoins amateurs to bulk up its network.

Next post: SWIMMERs: A Thought Experiment on the Potential and Limitations of Propellantless Interstellar Travel