We can learn a lot about stars by studying magnetic activity like starspots, flares and coronal mass ejections (CMEs). Starspots are particularly significant for scientists using radial velocity methods to detect planets, because they can sometimes mimic the signature of a planet in the data. But the astrobiology angle is also profound: Young M-dwarfs, known for flare activity, could be fatally compromised as hosts for life because strong flares can play havoc with planetary atmospheres.

Given the ubiquity of M-dwarfs — they’re the most common type of star in our galaxy — we’d like to know whether or not they are candidates for supporting life. A paper from Ekaterina Ilin and team at the Leibniz Institute for Astrophysics in Potsdam digs into the question by looking at the orientation of magnetic activity on young M-dwarfs.

The sample is small, though carefully chosen from the processing of over 3000 red dwarf signatures obtained by TESS, the Transiting Exoplanet Survey Satellite mission. The results are promising, indicating that the worst flare activity an M-dwarf can produce occurs along the poles of the star. If that is the case, then a young planetary system may remain unscathed. Here’s how Ilin describes this:

“We discovered that extremely large flares are launched from near the poles of red dwarf stars, rather than from their equator, as is typically the case on the Sun. Exoplanets that orbit in the same plane as the equator of the star, like the planets in our own solar system, could therefore be largely protected from such superflares, as these are directed upwards or downwards out of the exoplanet system. This could improve the prospects for the habitability of exoplanets around small host stars, which would otherwise be much more endangered by the energetic radiation and particles associated with flares compared to planets in the solar system.” 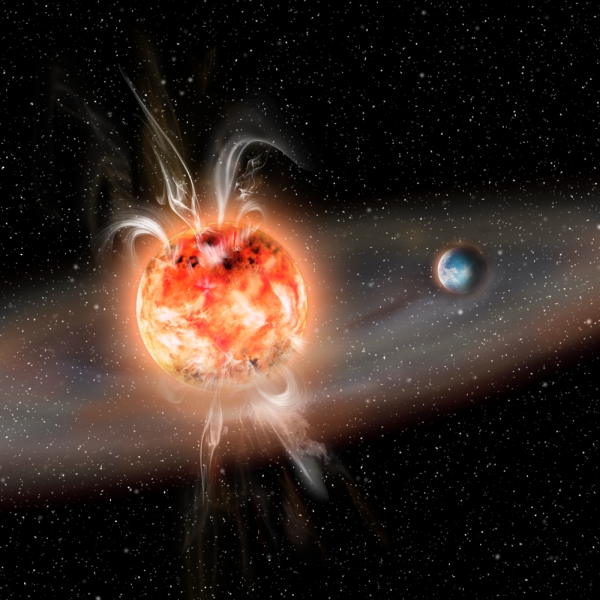 Image: Small stars flare actively and expel particles that can alter and evaporate the atmospheres of planets that orbit them. New findings suggest that large superflares prefer to occur at high latitudes, sparing planets that orbit around the stellar equator. Credit: AIP/ J. Fohlmeister.

This is provocative stuff, even if only four stars emerged from the TESS data as fitting the criteria the researchers were looking for. To understand how they winnowed these stars out, we need to look at PEPSI, the Potsdam Echelle Polarimetric and Spectroscopic Instrument, mounted at the Large Binocular Telescope (LBT) in Arizona. Feeding polarized light to the spectrograph, scientists using PEPSI have been able to use what is called the Zeeman effect — involving the polarization of spectral lines due to an external magnetic field — to analyze the field geometry of the field.

This earlier work has implied the existence of concentrated magnetic activity near the poles of fast rotating stars like young M-dwarfs, activity that emerges as spots and flares. While the Zeeman technique could reconstruct a stellar magnetic field, no observations of this polar clustering had previously been made — bear in mind that we cannot resolve the surface of the target stars. The Potsdam researchers were able to detect signs of polar clustering by analyzing white-light flares on their target stars, pinpointing the latitude of the flaring region from the shape of the light curve.

This works because modulations in brightness, caused by the young stars’ fast spin as the flare location rotates in and out of view on the stellar surface, carry useful information. M-dwarfs remain fast rotators much longer than stars like the Sun; in fact, the fast rotation enhances their magnetic and flare activity. The researchers were able to determine where on the star these flares occurred. According to the paper:

The exceptional morphology of the modulation allowed us to directly localize these flares between 55◦ and 81◦ latitude on the stellar surface. Our findings are evidence that strong magnetic fields tend to emerge close to the rotational poles of fast-rotating fully convective stars, and suggest a reduced impact of these flares on exoplanet habitability.

The kind of long-duration superflare activity considered most lethal for planetary atmospheres, in other words, occurs much closer to the pole than the weaker flares and spots found below 30◦. On our own mature G-class star, sunspots and flares associated with them tend to occur near the equator. This paper offers, then, a continuing lifeline for those interested in the prospects for life around M-class stars, while also pointing to the need for what the authors call “the first fully empirical spatio-temporal flare reconstructions on low mass stars.” The emergence of such a model will help us draw broader conclusions on the impact of stellar magnetic activity on M-dwarf planets.

The paper is Ilin et al., “Giant white-light flares on fully convective stars occur at high latitudes,” accepted at Monthly Notices of the Royal Astronomical Society 05 August 2021 (abstract / Preprint). Thanks to Michael Fidler and Antonio Tavani for an early heads-up on this work.