Why Fill a Galaxy with Self-Reproducing Probes?

We can’t know whether there is a probe from another civilization – a von Neumann probe of the sort we discussed in the previous post – in our own Solar System unless we look for it. Even then, though, we have no guarantee that such a probe can be found. The Solar System is a vast place, and even if we home in on the more obvious targets, such as the Moon, and near-Earth objects in stable orbits, a well hidden artifact a billion or so years old, likely designed not to draw attention to itself, is a tricky catch.

As with any discussion of extraterrestrial civilizations, we’re left to ponder the possibilities and the likelihoods, acknowledging how little we know about whether life itself is widely found. One question opens up another. Abiogenesis may be spectacularly rare, or it may be commonplace. What we eventually find in the ice moons of the outer system should offer us some clues, but widespread life doesn’t itself translate into intelligent, tool-making life. But for today, let’s assume intelligent toolmakers and long-lived societies, and ponder what their motives might be.

Let’s also acknowledge the obvious. In looking at motivations, we can only peer through a human lens. The actions of extraterrestrial civilizations, and certainly their outlook on existence itself, would be opaque to us. They would possibly act in ways we consider inexplicable, for reasons that defy the logic we apply to human decisions. But today’s post is a romp into the conjectural, and it’s a reflection of the fact that being human, we want to know more about these things and have to start somewhere.

Motivations of the Probe Builders

Greg Matloff suggests in his paper on von Neumann probes that one reason a civilization might fill the galaxy with these devices is the possibly universal wish to transcend death. A walk through the Roman ruins scattered around what was once the province of Gaul gave weight to the concept when my wife and I prowled round the south of France some years back. Humans, at least, want to put down a marker. They want to be remembered, and their imprint upon a landscape can be unforgettable.

But in von Neumann terms, I have trouble with this one. I stood next to a Roman wall near Saint-Rémy-de-Provence on a late summer day and felt the poignancy of all artifacts worn by time, but the Romans were decidedly mortal. They knew death was a horizon bounding a short life, and could transcend it only through propitiations to their gods and monuments to their prowess. A civilization that is truly long-lived, defined not by centuries but aeons, may have less regard for personal aggrandizement and even less sense of a coming demise. Life might seem to stretch indefinitely before it. 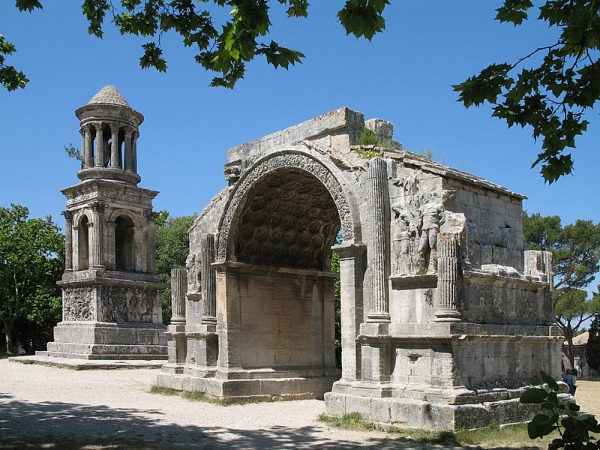 Image: Some of the ruins of the Roman settlement at Glanum in Saint-Rémy-de-Provence, recovered through excavations beginning in 1921. Walking here caused me to reflect on how potent memorials and monuments would be to a species that had all but transcended death. Would the impulse to build them be enhanced, or would it gradually disappear?

Probes as a means of species reproduction, another Matloff suggestion, ring more true to me, and I would suggest this may flag a biological universal, the drive to preserve the species despite the death of the individual. Here we’re in familiar science fiction terrain in which biological material is preserved by machines and flung to the stars, to be activated upon arrival and raised to awareness by artificial intelligence. Or we could go further – Matloff does – to say that biological materials may prove unnecessary, with computer uploads of the minds of the builders taking their place, another SF trope.

I can go with that as a satisfactory motivator, and it’s enough to make me want to at least try to find what Jim Benford calls ‘lurkers’ in our own corner of the galaxy. Another motivator that deeply satisfies me because it’s so universal among humankind is simple curiosity. A long-lived, perhaps immortal civilization that wants to explore can send von Neumann probes everywhere possible in the hope of learning everything it can about the universe. Encyclopedia Galactica? Why not? Imputing any human motive to an extraterrestrial civilization is dangerous, of course, but we have little else to go on. And centuries of human researchers and librarians attest to the power of this one.

Would such probes be configured to establish communication with any societies that arise on the planets under observation? This is the Bracewell probe notion that extends von Neumann self-reproduction to include this much more immediate form of SETI, with potential knowledge stored at planetary distances. Obviously, 2001: A Space Odyssey comes to mind as we recall the mysterious monoliths found on the early Earth and, much later, on the Moon, and the changes to humanity they portend.

But are long-lived civilizations necessarily friendly? Fred Saberhagen’s ‘berserker’ probes key off the Germanic and particularly Norse freelance bodyguards and specialized troops that became fixtures at the courts of royalty in early medieval times (the word is from the Old Norse word meaning ‘bearskin’). These were not guys you wanted to mess with, and associations with their attire of bear and wolfskins seem to have contributed to the legend of werewolves. Old Norse records show that they were prominent at the court of Norway’s king Harald I Fairhair (reigned 872–930).

Because they made violence into a way of life, we should hope not to find the kind of probe that would be named after them, which might be sent out to eliminate competition. Thus Saberhagen’s portrayal of berserker probes sterilizing planets just as advanced life begins to appear. The fact that we have not yet been sterilized may be due to the possibility that such a probe does not yet consider us ‘advanced,’ but more likely implies we have no berserker probes nearby. Let’s hope to keep it that way.

Or what about the spread of life itself? If abiogenesis does turn out to be unusually rare, it’s possible that any civilization with the power to do so would decide to seed the cosmos with life. In this case, we’re not sending uploaded intelligence or biological beings in embryonic form in our probes, but rather the most basic lifeforms that can proliferate on any planets offering the right conditions for their development. Perhaps there becomes an imperative – written about, for example, by Michael Mautner and Matloff himself – to spread life as a way to transform the cosmos. Milan Ćirković continues to explore the implications of just such an effort.

In an interesting post in Sentient Developments, Canadian futurist George Dvorsky points out that self-reproduction has more than an outward-looking component. Supposing a civilization interested in building a megastructure – a Dyson sphere, let’s say – decides to harness self-reproduction to supply the needed ‘worker’ devices that would mine the local stellar system and create the object in question.

At a truly cosmic level, Matloff speculates, self-replicating probes might be deployed to build megastructures that could alter the course of cosmic evolution. We’re in Stapledon territory now, freely mixing philosophy and wonder. We’re also in the arena claimed by Frank Tipler in his The Physics of Immortality (Doubleday, 1994).

We’ll want to search the Earth Trojan asteroids and co-orbitals for any indication of extraterrestrial probes, though it’s also true that the abundant resources of the Kuiper Belt might make operations there attractive to this kind of intelligence. One of the biggest questions has to do with the size of such probes. Here I’ll quote Matloff:

In a search for active or quiescent von Neumann probes in the solar system, human science would contend with great uncertainty regarding the size of such objects. Some science fiction authors contend that these devices might be the size of small planetary satellites (see for example L. Johnson, Mission to Methone and A. Reynolds, Pushing Ice). On the other hand, Haqq-Misra and Kopparapu (2012) believe that they may be in the 1-10 m size range of contemporary human space probes and these might be observable.

But there may be a limit to von Neumann probe detection. If they can be nano-miniaturized as suggested by Tipler (1994), the solar system might swarm with them and detection efforts would likely fail.

I remember having a long phone conversation two decades ago with Robert Freitas on this very point. Freitas had originally come up with a self-reproducing probe concept at the macro-scale called REPRO, but went on to delve into the implications of nano-technology. He made Matloff’s point in our discussion: If probe technologies operate at this scale, the surface of planet Earth itself could be home to an observing network about which we would have no awareness. Self-reproductive probes will be hard to rule out, but looking where we can to screen for the obvious makes sense.

Next post: Modeling a Habitable Planet at Centauri A/B