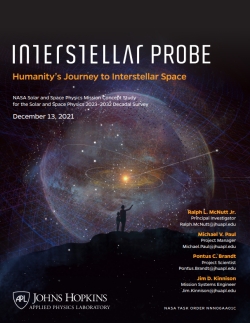 A recent paper in Acta Astronautica reminds me that the Mission Concept Report on the Interstellar Probe mission has been available on the team’s website since December. Titled Interstellar Probe: Humanity’s Journey to Interstellar Space, this is the result of lengthy research out of Johns Hopkins Applied Physics Laboratory under the aegis of Ralph McNutt, who has served as principal investigator. I bring the mission concept up now because the new paper draws directly on the report and is essentially an overview to the community about the findings of this team.

We’ve looked extensively at Interstellar Probe in these pages (see, for example, Interstellar Probe: Pushing Beyond Voyager and Assessing the Oberth Maneuver for Interstellar Probe, both from 2021). The work on this mission anticipates the Solar and Space Physics 2023–2032 Decadal Survey, and presents an analysis of what would be the first mission designed from the top down as an interstellar craft. In that sense, it could be seen as a successor to the Voyagers, but one expressly made to probe the local interstellar medium, rather than reporting back on instruments designed originally for planetary science.

The overview paper is McNutt et al., “Interstellar probe – Destination: Universe!,” a title that recalls (at least to me) A. E. van Vogt’s wonderful collection of short stories by the same name (1952), whose seminal story “Far Centaurus” so keenly captures the ‘wait’ dilemma; i.e., when do you launch when new technologies may pass the craft you’re sending now along the way? In the case of this mission, with a putative launch date at the end of the decade, the question forces us into a useful heuristic: Either we keep building and launching or we sink into stasis, which drives little technological innovation. But what is the pace of such progress?

I say build and fly if at all feasible. Whether this mission, whose charter is basically “[T]o travel as far and as fast as possible with available technology…” gets the green light will be determined by factors such as the response it generates within the heliophysics community, how it fares in the upcoming decadal report, and whether this four-year engineering and science trade study can be implemented in a tight time frame. All that goes to feasibility. It’s hard to argue against it in terms of heliophysics, for what better way to study the Sun than through its interactions with the interstellar medium? And going outside the heliosphere to do so makes it an interstellar mission as well, with all that implies for science return. 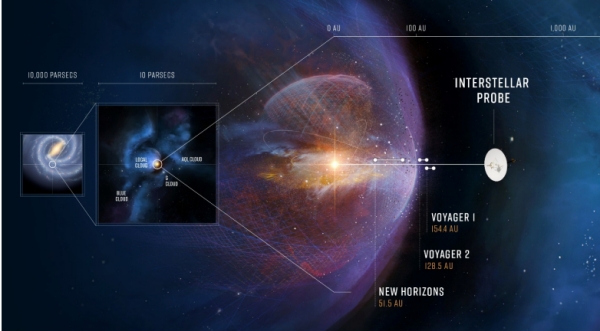 Image: This is Figure 2-1 from the Mission Concept Report. Caption: During the evolution of our solar system, its protective heliosphere has plowed through dramatically different interstellar environments that have shaped our home through incoming interstellar gas, dust, plasma, and galactic cosmic rays. Interstellar Probe on a fast trajectory to the very local interstellar medium (VLISM) would represent a snapshot to understand the current state of our habitable astrosphere in the VLISM, to ultimately be able to understand where our home came from and where it is going. Credit: Johns Hopkins Applied Physics Laboratory.

Crossing through the heliosphere to the “Very Local” interstellar medium (VLISM) is no easy goal, especially when the engineering requirements to meet the decadal survey specifications take us to a launch no later than January of 2030. Other basic requirements include the ability to take and return scientific data from 1000 AU (with all that implies about long-term function in instrumentation), with power levels no more than 600 W at the beginning of the mission and no more than half of that at its end, and a mission working lifetime of 50 years. Bear in mind that our Voyagers, after all these years, are currently at 155 and 129 AU respectively. A successor to Voyager will have to move much faster.

But have a look at the overview, which is available in full text. Dr. McNutt tells me that we can expect a companion paper from Pontus Brandt (likewise at APL) on the science aspects of the larger Mission Concept Report; this is likewise slated for publication in Acta Astronautica. According to McNutt, the APL contract from NASA’s Heliophysics Division completes on April 30 of this year, so the ball now lands in the court of the Solar and Space Physics Decadal Survey Team. And let me quote his email:

“Reality is never easy. I have to keep reminding people that the final push on a Solar Probe began with a conference in 1977, many studies at JPL through 2001, then studies at APL beginning in late 2001, the Decadal Survey of that era, etc. etc. with Parker Solar Probe launching in August 2018 and in the process now of revolutionizing our understanding of the Sun and its interaction with the interplanetary medium.” 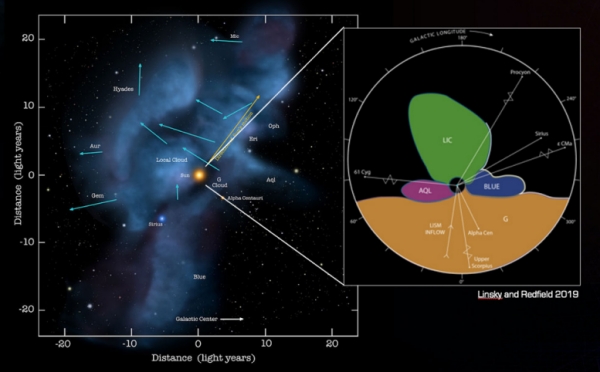 Image: This is Figure 2-8 from the Mission Concept Report. Caption: Recent studies suggest that the Sun is on the path to leave the LIC [Local Interstellar Cloud] and may be already in contact with four interstellar clouds with different properties (Linsky et al., 2019). (Left: Image credit to Adler Planetarium, Frisch, Redfield, Linsky.)

Our society has all too little patience with decades-long processes, much less multi-generational goals. But we do have to understand how long it takes missions to go through the entire sequence before launch. It should be obvious that a 2030 launch date sets up what the authors call a ‘technology horizon’ that forces realism with respect to the physics and material properties at play here. Note this, from the paper:

…the enforcement of the “technology horizon” had two effects: (1) limit thinking to what can “be done now with maybe some “‘minor’ extensions” and (2) rule out low-TRL [technology readiness level] “technologies” which (1) we have no real idea how to develop, e.g., “fusion propulsion” or “gas-core fission”, or which we think we know how to develop but have no means of securing the requisite funds, e.g., NEP (while some might argue with this assertion, the track record to date does not argue otherwise).

Thus the dilemma of interstellar studies. Opportunities to fund and fly missions are sparse, political support always problematic, and deadlines shape what is possible. We have to be realistic about what we can do now, while also widening our thinking to include the kind of research that will one day pay off in long-term results. Developing and nourishing low-TRL concepts has to be a vital part of all this, which is why think tanks like NASA’s Innovative Advanced Concept office are essential, and why likewise innovative ideas emerging from the commercial sector must be considered.

Both tracks are vital as we push beyond the Solar System. McNutt refers to a kind of ‘relay race’ that began with Pioneer 10 and has continued through Voyagers 1 and 2. A mission dedicated to flying beyond the heliopause picks up that baton with an infusion of new instrumentation and science results that take us “outward through the heliosphere, heliosheath, and near (but not too near) interstellar space over almost five solar cycles…” Studies like these assess the state of the art (over 100 mission approaches are quantified and evaluated), defining our limits as well as our ambitions.

Next post: Good News for a Gravitational Focus Mission