It’s not easy teasing out information about a tiny red dwarf star, even when it’s the closest star to the Sun. Robert Thorburn Ayton Innes (1861-1933), a Scottish astronomer, found Proxima using a blink comparator in 1915, noting a proper motion similar to Alpha Centauri (4.87” per year), with Proxima about two degrees away from the binary. Finding out whether the new star was actually closer than Centauri A and B involved a competition with a man with a similarly august name, Joan George Erardus Gijsbertus Voûte, a Dutch astronomer working in South Africa. Voûte’s parallax figures were more accurate, but Innes didn’t wait for debate, and proclaimed the star’s proximity, naming it Proxima Centaurus. 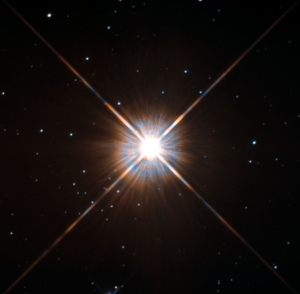 The back and forth over parallax and the subsequent careers of both Innes and Voûte make for interesting reading. I wrote both astronomers up back in 2013 in Finding Proxima Centauri, but I’ll send you to my source for that article, Ian Glass (South African Astronomical Observatory), who published the details in the magazine African Skies (Vol. 11 (2007), p. 39). You can find the abstract here.

Image: Shining brightly in this Hubble image is our closest stellar neighbour: Proxima Centauri. Although it looks bright through the eye of Hubble, as you might expect from the nearest star to the Solar System, the star is not visible to the naked eye. Its average luminosity is very low, and it is quite small compared to other stars, at only about an eighth of the mass of the Sun. However, on occasion, its brightness increases. Proxima is what is known as a “flare star”, meaning that convection processes within the star’s body make it prone to random and dramatic changes in brightness. The convection processes not only trigger brilliant bursts of starlight but, combined with other factors, mean that Proxima Centauri is in for a very long life. Astronomers predict that this star will remain on the main sequence for another four trillion years, some 300 times the age of the current Universe. These observations were taken using Hubble’s Wide Field and Planetary Camera 2 (WFPC2). Credit: NASA/ESA.

It’s a long way from blink comparators to radial velocity measurements, the latter of which enabled our first exoplanet discoveries back in the 1990s, measuring how the gravitational pull of an orbiting planet could pull its parent star away from us, then towards us on the other side of the orbit, with all the uncertainties that implies. We’re still drilling into the details of Proxima Centauri, and radial velocity occupies us again today. The method depends on the mass of the star, for if we know that, we can then make inferences about the mass of the planets we find around it.

Thus the discovery of Proxima Centauri’s habitable zone planet, Proxima b, a planet we’d like to know much more about given its enticing minimum mass of about 1.3 Earths and an orbital period of just over 11 days. Radial velocity methods at exquisite levels of precision rooted out Proxima b and continue to yield new discoveries.

We’re learning a lot about Alpha Centauri itself – the triple system of Proxima and the central binary Centauri A and B. Just a few years ago, Pierre Kervella and team were able to demonstrate what had previously been only a conjecture, that Proxima Centauri was indeed gravitationally bound to Centauri A and B. The work was done using high-precision radial velocity measurements from the HARPS spectrograph. But we still had uncertainty about the precise value of Proxima’s mass, which had in the past been extrapolated from its luminosity.

This mass-luminosity relation is useful when we have nowhere else to turn, but as a paper from Alice Zurlo (Universidad Diego Portales, Chile) explains, there are significant uncertainties in these values, which point to higher error bars the smaller the star in question. As we learn more about not just other planets but warm dust belts around Proxima Centauri, we need a better read on the star’s mass, and this leads to the intriguing use to which Zurlo and team have put gravitational microlensing.

Here we’re in new terrain. The gravitational deflection of starlight is well demonstrated, but to use it, we need to have a background object move close enough to Proxima Centauri so that the latter can deflect its light. A measurement of this kind was recently made on the star Stein 3051 B, a white dwarf, using data from the Hubble instrument, the first use of gravitational lensing to measure the mass of a star beyond our Solar System. Zurlo and team have taken advantage of microlensing events at Proxima involving two background stars, one in 2014 (source 1), the other two years later (source 2), but the primary focus of their work is with the second event.

Using the Spectro-Polarimetric High-contrast Exoplanet REsearch instrument (SPHERE) at the Very Large Telescope at Cerro Paranal in Chile, the researchers observed Proxima Centauri and the background stars from March of 2015 to June of 2017. You can see Proxima in the image below, with the two background stars. In the caption, IRDIS refers to the near-infrared imager and spectrograph which is a part of the SPHERE/VLT installation. 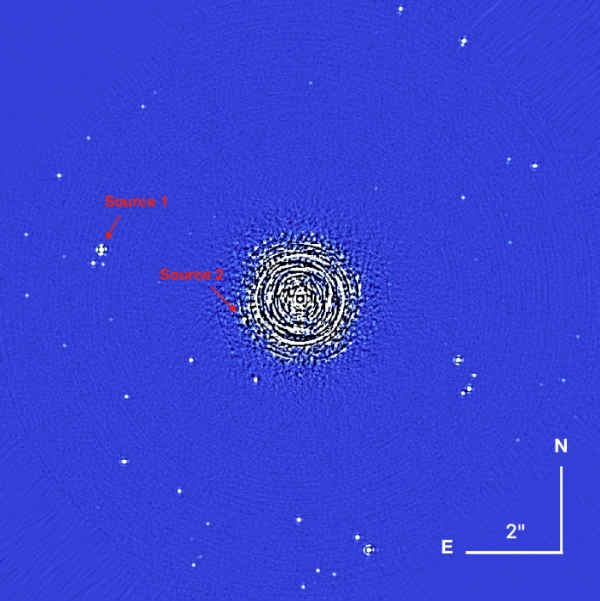 Image: This is Figure 1 from the paper. Caption: IRDIS FoV for the April 2016 epoch. The image is derotated, median combined, and cleaned with a spatial filter. At the center of the image, inside the inner working angle (IWA), the speckle pattern dominates, in the outer part of the image our reduction method prevents the elongation of the stars’ point spread functions (PSFs). The bars in the lower right provide the spatial scale. North is up and East is to the left. Credit: Zurlo et al.

The extraordinary precision of measurement needed here is obvious, and the mechanics of making it happen are described in painstaking detail in the paper. The authors note that the SPHERE observations will not be further refined because the background star they call Source 2 is no longer visible on the instrument’s detector. Nonetheless:

The precision of the astrometric position of this source is the highest ever reached with SPHERE, thanks to the exquisite quality of the data, and the calibration of the detector parameters with the large population of background stars in the FoV. Over the next few years, Proxima Cen will be followed up to provide a better estimation of its movement on the sky. These data will be coupled with observations from HST and Gaia to take advantage of future microlensing events.

The results of the two-year monitoring program show deflection of the background sources’ light consistent with our tightest yet constraints on the mass of Proxima Centauri. The value is 0.150 solar masses, with possible error in the range of +0.062 to -0.051, or roughly 40%. This is, the authors note, “the first and the only currently possible measurement of the gravitational mass of Proxima Centauri.”

The previous value drawn from mass-luminosity figures was 0.12 ± 0.02 M⊙. What next? While Source 2 may be out of the picture using the SPHERE installation, the authors add that Gaia measurements of the proper motion and parallax of that star may further refine the analysis. Future microlensing will have to wait, for no star as bright as Source 2 will pass within appropriate range of Proxima for another 20 years.