Solar Sailing: The Beauties of Diffraction

Knowing of Grover Swartzlander’s pioneering work on diffractive solar sails, I was not surprised to learn that Amber Dubill, who now takes the idea into a Phase III study for NIAC, worked under Swartzlander at the Rochester Institute of Technology. The Diffractive Solar Sailing project involves an infusion of $2 million over the next two years, with Dubill (JHU/APL) heading up a team that includes experts in traditional solar sailing as well as optics and metamaterials. A potential mission to place sails into a polar orbit around the Sun is one possible outcome.

[Addendum: The original article stated that the Phase III award was for $3 million. The correct amount is $2 million, as changed above].

But let’s fall back to that phrase ‘traditional solar sailing,’ which made me wince even as I wrote it. Solar sailing relies on the fact that while solar photons have no mass, they do impart momentum, enough to nudge a sail with a force that over time results in useful acceleration. Among those of us who follow interstellar concepts, such sails are well established in the catalog of propulsion possibilities, but to the general public, the idea retains its novelty. Sails fire the imagination: I’ve found that audiences love the idea of space missions with analogies to the magnificent clipper ships of old.

We know the method works, as missions like Japan’s IKAROS and NASA’s NanoSail-D2 as well as the Planetary Society’s LightSail 2 have all demonstrated. Various sail missions – NEA Scout and Solar Cruiser stand out here – are in planning to push the technology forward. These designs are all reflective and depend upon the direction of sunlight, with sail designs that are large and as thin as possible. What the new NIAC work will examine is not reflection but diffraction, which involves how light bends or spreads as it encounters obstacles. Thus a sail can be built with small gratings embedded within the thin film of its structure, and the case Swartzlander has been making for some time now is that such sails would be more efficient.

A diffractive sail can work with incoming light at a variety of angles using new metamaterials, in this case ‘metafilms,’ that are man-made structures with properties unlike those of naturally occurring materials. Sails made of them can be essentially transparent, meaning they will not absorb large amounts of heat from the Sun, which could compromise sail substrates.

Moreover, these optical films allow for lower-mass sails that are steered by electro-optic methods as opposed to bulky mechanical systems. They can maintain more efficient positions while facing the Sun, which also makes them ideal for the use of embedded photovoltaic cells and the collection of solar power. Reflective sails need to be tilted to achieve best performance, but the inability to fly face-on in relation to the Sun reduces the solar flux upon the sail.

The Phase III work for NIAC will take Dubill and team all the way from further analyzing the properties of diffractive sails into development of an actual mission concept involving multiple spacecraft that can collectively monitor solar activity, while also demonstrating and fine-tuning the sail strategy. The description of this work on the NIAC site explains the idea:

Delightfully, a sail like this would not present the shiny silver surface of the popular imagination but would instead create a holographic effect that Dubill’s team likens to the rainbow appearance of a CD held up to the Sun. And they need not be limited to solar power. Metamaterials are under active study by Breakthrough Starshot because they can be adapted for laser-based propulsion, which Starshot wants to use to reach nearby stars through a fleet of small sails and tiny payloads. The choice of sail materials that can survive the intense beam of a ground-based laser installation and the huge acceleration involved is crucial.

The diffractive sail concept has already been through several iterations at NIAC, with the testing of different types of sail materials. Grover Swartzlander received a Phase I grant in 2018, followed by a Phase II in 2019 to pursue the work, a needed infusion of funding given that before 2017, few papers on diffractive space sails existed in the literature. In a 2021 paper, Dubill and Swartzlander went into detail on the idea of a constellation of sails monitoring solar activity. From the paper:

We have proposed launching a constellation of satellites throughout the year to build up a full-coverage solar observatory system. For example a constellation of 12 satellites could be positioned at 0.32 AU and at various inclinations about the sun within 6 years: Eight at various orbits inclined by 60 and four distributed about the solar ecliptic. We know of no conventionally powered spacecraft that can readily achieve this type of orbit in such a short time frame. Based on our analysis, we find that diffractive solar sails provide a rapid and cost-effective multi-view option for investigating heliophysics. 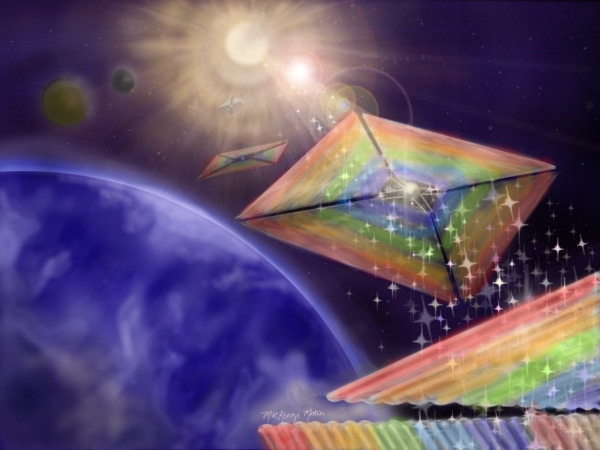 “While this technology can improve a multitude of mission architectures, it is poised to significantly impact the heliophysics community’s need for unique solar observation capabilities. Through expanding the diffractive sail design and developing the overall sailcraft concept, the goal is to lay the groundwork for a future demonstration mission using diffractive lightsail technology.”