Dawn at Ceres: ‘Down Among Them’

The new images just in from Dawn at Ceres unexpectedly evoke a much earlier mission, the Apollo 10 precursor to the lunar landing. This was the second manned mission to orbit the Moon, one that saw the lunar module drop to just over 15 kilometers from the surface in a rehearsal for the Apollo 11 landing. Just for fun, I’ve been looking through the Apollo 10 transcripts for day 5, when the LM (‘Snoopy’) had already separated from the command module.

John Young was in the command module as Gene Cernan and Tom Stafford put Snoopy through its paces. Nobody had ever been this close to the Moon before. You probably remember or else have read about Snoopy’s descent toward the lunar peaks:

To which capcom Charlie Duke in Houston replied:

Dawn is not a manned mission, but I couldn’t help thinking of those Apollo 10 moments (still vivid in my memory) when I looked at the latest imagery from Ceres. The spacecraft has now descended into its final and lowest orbit at the dwarf planet, which will bring us the highest resolution images we’ll get. Here we are ‘down among them,’ though not nearly as close as Apollo 10 to the Moon. The altitude is approximately 385 kilometers, an altitude that Dawn will maintain for the rest of the mission. The resolution in the image below is 35 meters per pixel. 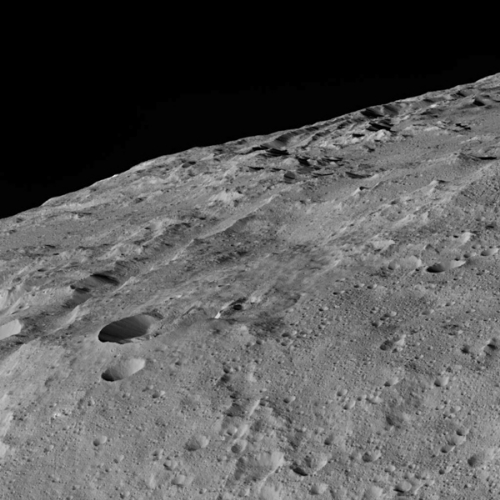 Ceres is a small world, a mere 940 kilometers in diameter, but the trough features are interesting, a common sight on larger planets. They are thought to be the result of impact stresses and contraction, and as this JPL news release points out, may also result from the loading of the crust by large mountains (think Olympus Mons on Mars). Researchers believe similar processes have occurred across Ceres, with some troughs possibly reflecting internal tectonic stresses. “Why they are so prominent is not yet understood,” says Paul Schenk (Lunar and Planetary Institute) but they are probably related to the complex crustal structure of Ceres.”

So bit by bit, we’re working out Ceres’ mysteries. We’ve recently learned that the bright material found in craters like Occator is consistent with hexahydrite, which is a type of magnesium sulfate (see Catching Up with Dawn at Ceres). We’ve also learned that Ceres contains ammoniated clays, which leads to the speculation that it may have formed as far out as the orbit of Neptune and migrated inward, or else later drew in materials that formed there.

We have months of data and imagery ahead. With Dawn’s primary and backup framing cameras both operational, we turn to the craft’s visible and infrared mapping spectrometer, which will identify minerals by analyzing the wavelengths of light reflected off the surface. The abundance of various elements will be measured by the craft’s gamma ray and neutron detector (GRaND). And after operations have ended? Dawn was able to leave Vesta but it will never leave Ceres, its orbit stable enough that it will remain as a satellite of the dwarf planet.

Sometimes I have to remind myself that what I am looking at is real, given that Ceres has been no more than an blurry speck for most of my life. Spaceflight kicks off the grandest of enthusiasms, infusing us with genuine wonder even when we’re in the most demanding of situations. On that note I return briefly to Apollo 10, at the moment during the LM’s descent when the Earth began to rise and highly trained astronauts gave voice to the moment:

I wouldn’t have been able to find the words either. Here’s the image from Snoopy. 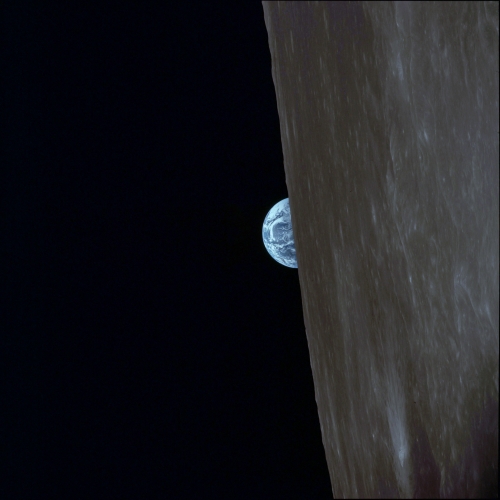