The ongoing Interstellar Probe study at the Johns Hopkins University Applied Physics Laboratory reminds us of the great contribution of the Voyager spacecraft, but also of the need to develop their successors. Interstellar flight is a dazzling goal considered in the long term, but present technologies develop incrementally and missions to other stars are a multi-generational goal. But as we continue that essential effort with projects like Interstellar Probe, we can also make plans to explore objects from other stellar systems (ISOs) closer to home.

I refer of course to the appearance in the last three years of two such objects, 1I/’Oumuamua and 2I/Borisov, the ‘I’ in their names referencing the exciting fact that these are interstellar in nature, passing briefly through our system before moving on. Papers have begun to appear to examine missions to one or the other of these objects, or to plan how, with sufficiently early discovery, we could get a spacecraft to the next one. And keep in mind the ESA’s Comet Interceptor mission, which sets its sights on a long-period comet but could be used for an ISO.

Are missions to interstellar objects possible with near-term technology? A new paper from lead author Andreas Hein (Initiative for Interstellar Studies) and an international team of researchers answers the question in the affirmative. The paper characterizes such missions by the resources required to perform them, which in turn relates to the ISO’s trajectory. Unbound ISOs — those that pass through our system only once — can be contrasted with bound objects that have remained in the Solar System after their entry. If the ISO is unbound, a mission launched before perihelion would have the best chance of producing data and perhaps sample return. 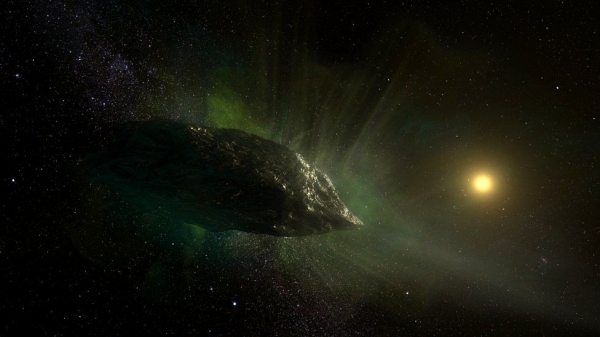 In previous papers, Hein and team have considered chemical propulsion complemented by a reverse gravity assist at Jupiter and a Solar Oberth Maneuver to reach 1I/’Oumuamua, although they have also looked at thermal nuclear propulsion with gravity assist at Jupiter. Uncertainties in the object’s orbit are challenging but, the authors believe, surmountable through the use of a telescope like that of New Horizons (LORRI) or, a highly speculative idea, a swarm of chipsats that could be launched ahead of the probe to refine navigational data. This approach goes well beyond existing technology, though, as the authors acknowledge by citing the work on Breakthrough Starshot’s laser architecture, which is a long way from realization.

I’m also concerned about that notion of a Solar Oberth Maneuver, given what we’ve learned recently in connection with the research on Interstellar Probe, for the kind of spacecraft described here to intercept 1I/’Oumuamua would carry the needed upper stage kick engine, along with the heat-shield technology Interstellar Probe has been investigating. All this adds to mass. The authors believe Falcon Heavy (or, unlikely, a future SLS) would be up to the challenge, but I think the proposed Solar Oberth Maneuver at 6 solar radii is a problematic goal in the near-term.

The authors echo these sentiments in terms of the perihelion burn itself as well as the navigation issues to reach the ISO which will ensue. A propulsive burn at perihelion for a probe trying to intercept an interstellar object is a long way from proven technology, particularly when we’re hoping to deliver a substantial instrument package to the ISO for science return. The authors call for developing nuclear thermal propulsion in order to make a wider range of ISOs reachable without relying on the Oberth maneuver.

The paper usefully offers a taxonomy of interstellar objects, matched to their associated science and conceivable mission types. Objects with low inclinations, low hyperbolic escape velocity (v∞), and those discovered well before perihelion are the most reachable targets. Of course, this survey of options for reaching an ISO isn’t intended to be specific to a given object but applicable to many, suggesting what is possible with present and near-term technologies. In the discussion of a mission to 1I/’Oumuamua, the authors also note the wide range of details that need to be considered:

Our brief analysis (and its attendant caveats) should not be regarded as exhaustive. Other issues that we have not delineated include the difficulties posed by long CCD exposure times (11 hours in our scenario) such as the cumulative impact of cosmic rays and the necessity of accounting for parallax motion of the object during this period. Obstacles with respect to measuring the position of the object, calculating offsets, and relaying it to the spacecraft may also arise. Hence, we acknowledge that there are significant (but not necessarily insurmountable) and outstanding challenges that are not tackled herein, as they fall outside the scope of this particular paper.

In any event, 1I/’Oumuamua may be quite a tricky object to catch at this juncture even for this kind of fast flyby. Objects detected earlier in their entry into our system should present a much more workable challenge, and with the Vera Rubin Observatory coming into play, we are probably going to be finding many more of them, some well before perihelion. Hence the need to know what is possible for future operations at ISOs, ensuring we have a plan and resources available to fly when we next have the opportunity.

A rendezvous mission may one day be in the cards, with the authors relying on electric or magnetic sail propulsion schemes to allow the spacecraft to slow down and study the target at close hand. But it may be more reasonable to consider rendezvous with captured interstellar objects in bound elliptical orbits. These are missions which are examined here in relation to two potential ISOs (not yet confirmed as such), (514107) Ka’epaoka’awela, a Jupiter co-orbital in retrograde orbit, and the Centaur 2008 KV42. The paper examines rendezvous strategies and provides trajectories for multiple years. 2008 KV42, for example, should be reachable for rendezvous with launch in 2029 and a flight duration of 15 years.

Finally, nuclear thermal technologies should allow sample return from some interstellar objects using a pre-positioned interceptor at the Sun/Earth L2 point. The paper considers an interceptor mission to comet C/2020 N1, serving as a surrogate for particular types of ISOs. The spacecraft, using nuclear thermal or solar electric propulsion, would deploy an impactor on approach to the object and travel through the plume, perhaps using swarm subprobes to return samples to the main craft depending on whether or not the plume is thought likely to be hazardous.

Even without nuclear thermal capability, though, missions can be flown to some types of interstellar objects with technologies that are currently in use. From the paper:

Our results indicate that most mission types elucidated herein, except for sample return, could be realized with existing technologies or modified versions of existing technologies, such as chemical propulsion and a Parker Solar Probe-type heat shield (Hein et al., 2019; Hibberd et al., 2020). Collisions with dust, gas, and cosmic rays and spacecraft charging in the interplanetary or interstellar medium will engender deflection of the spacecraft trajectory and cause material damage to it, but both effects are likely minimal even at high speeds (Hoang et al., 2017; Hoang & Loeb, 2017; Lingam & Loeb, 2020, 2021), and the former can be corrected by onboard thrusters.

So we learn that missions to interstellar objects are feasible, with some fast flyby scenarios capable of being accomplished with today’s technologies. Rendezvous and sample return missions await the maturation of solar electric and nuclear thermal propulsion. Here the concept ‘near-term’ is speculative. When will we have nuclear thermal engines available for this kind of mission? I am speaking in a practical sense — we know a great deal about nuclear thermal methods, but when will we deploy workable engines at a high enough Technology Readiness Level to use?

There is much we could learn from an ISO intercept, whether a flyby, a rendezvous or a sample return. Given that we are a long way from being able to sample interstellar objects in other stellar systems (I doubt seriously we’ll have this capability in a century’s time), ISOs represent our best bet to discover the structure and composition of extrasolar objects. This and the capability of doing interplanetary dust and plasma science along the way should be enough to keep such missions under active study as our new generation telescopes come online.

The paper is Hein et al., “Interstellar Now! Missions to Explore Nearby Interstellar Objects,” in press at Advances in Space Research (abstract / preprint).