Hipparcos: Filling In the Galactic Map

From the Cape of Good Hope, Alpha Centauri is a beacon in the sky, the third brightest star after Sirius and Canopus. The combined light of Centauri A and B (and Proxima as well, though at 11th magnitude, its contribution is minimal) caught the eye of Scottish lawyer Thomas Henderson, who in the course of a varied career found himself director of the Royal Observatory in South Africa. Cursed with poor eyesight, Henderson fixed on a mathematical approach to astronomy and chose to subject the Centauri stars to distance measurements, observing the system from both sides of Earth’s orbit to look for apparent motion.

And find it he did, a movement of three quarters of a second of arc that, using some basic math, gave him a distance of 41 trillion kilometers. This stellar parallax method has since been used on countless stars, but it’s really suitable only within 200 light years or so. Which is why older astronomy texts show such variation in stellar distances. One estimate of the distance of Deneb, for example, places it between 1470 and 1600 light years away, whereas JPL’s estimate runs to 3228 light years. 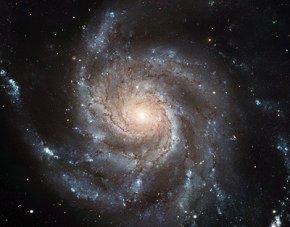 Star catalogs produced from space measurements tighten up the numbers considerably, which is why the news about Hipparcos is so interesting. This ESA mission, the High Precision Parallax Collecting Satellite, was launched in 1989 with a goal of measuring the position and distance to 100,000 stars with an accuracy exceeding ground-based measurements by a factor of ten to 100. Two data collections, the Hipparcos and Tycho catalogs, resulted from all this, with the first Tycho catalog covering about a million stars.

Image: A spiral galaxy not so different from our own. Credit: ESA/NASA.

A new version of the Hipparcos catalog is now available (in print form for now, with the online version appearing next year), the result of re-processing of the original data with upgraded technology. We’re seeing the benefits of re-examining old datasets — in many respects, our data collection capabilities have out-run our ability to analyze the data in short periods of time. Hipparcos data now produce a revised catalog improved by a factor of two on the original. A revised Tycho catalog appearing in 2000 swelled its own stellar ranks to 2.5 million.

ESA’s Gaia astrometry mission will launch in 2011, its catalog intended for release in 2020. Ultimately, let’s start thinking about extending the baseline for parallax enormously. An outer Solar System observatory could extend the baseline to hundreds of AUs. And imagine the potential benefit of an observatory in the Alpha Centauri system, pushing the baseline to 4.34 light years and making it possible to measure stellar distances accurately out to a range of almost four million light years.

What we’re doing, of course, is continually fine-tuning our idea of where we fit into the celestial scheme of things, a process that Thomas Henderson and other early star-distance measurers like Friedrich Georg Wilhelm von Struve and Friedrich Wilhelm Bessel began in the 19th Century (Bessel beat Henderson into print with a measurement of the distance to 61 Cygni, somewhat eclipsing the latter’s fine work). Mapping the Milky Way itself is a grand challenge that is continuing to bring our own city of stars — and our place in it — into far sharper focus.