Enceladus: Making the Case for Life

Thoughts on Enceladus as a home to life have kept astrobiological debate lively, an unexpected but welcome development from the Cassini mission. The interest is understandable: Cassini has shown us plumes that seem to be the result of some kind of geothermal venting, with liquid water and geothermal energy sources all possible drivers for the formation of life. We don’t exactly know what’s going on here, but the possibility of a hydrological cycle — liquid, solid, gas — has kept theorists active, as witness a research note by Christopher Parkinson (Caltech) and team.

The early Earth serves as a possible model for life elsewhere. With photosynthesis not available, life would depend on abiotic sources of chemical energy. It’s believed this would have come in the form of oxidation-reduction processes driven by factors like hydrothermal activity, impacts, electrical discharges, or solar ultraviolet radiation. Organics may have been synthesized from inorganic molecules near submarine hydrothermal vents. In similar ways, the authors believe, Enceladus may offer energy-generating reactions that create conditions favorable for life.

I’ve never seen the case for this moon made quite so emphatically. From the paper (the italics are mine):

The combination of a hydrological cycle, chemical redox gradient and geochemical cycle give favorable conditions for life on Enceladus. To our knowledge, these conditions are not duplicated anywhere else in our solar system except our planet. Compared to Mars, Titan and Europa, Enceledus is the only other object in our solar system that appears to satisfy the conditions for maintaining life at present, even if the ability of life to evolve there is uncertain. 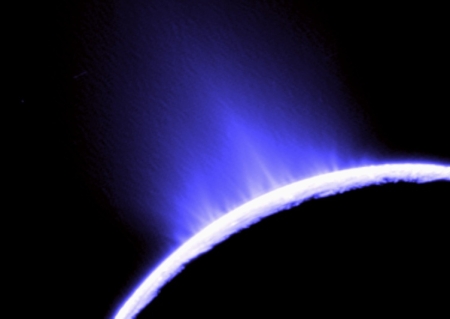 Image: Ice geysers erupt on Enceladus, bright and shiny inner moon of Saturn. Shown in this false-color image, a backlit view of the moon’s southern limb, the majestic, icy plumes were discovered by instruments on the Cassini spacecraft during close encounters with Enceladus in November of 2005. Eight source locations for these geysers have now been identified along substantial surface fractures in the moon’s south polar region. Researchers suspect the geysers arise from near-surface pockets of liquid water with temperatures near 273 kelvins (0 degrees C). That’s hot when compared to the distant moon’s surface temperature of 73 kelvins (-200 degrees C). The cryovolcanism is a dramatic sign that tiny, 500km-diameter Enceladus is surprisingly active. Credit: Cassini Imaging Team, SSI, JPL, ESA, NASA.

What about those other habitats we’ve been considering? The paper continues:

Mars may have had a hydrological cycle in its early history, but there is no evidence that one exists today. Titan may be a repository of pre-biotic organic chemicals, but the conditions do not appear favorable for the development of life. Europa currently may have a hydrological cycle, but it may be a closed chemical system that will eliminate any chemical redox gradient in a geologically short time. Presently Enceladus is the most exciting object in the solar system for the search of extant life.

And nowhere else have I seen the suggestion that concludes this interesting paragraph:

We have compelling evidence supporting the view that Enceladus has active hydrological, chemical and geochemical cycles, which are essential ingredients for originating and sustaining life. Planetary protection issues aside, if life does not yet exist on Enceladus, artiﬁcial introduction of terrestrial life to this environment would be an interesting, and most likely successful experiment.

Here’s interesting fodder for a science fiction story. If you could introduce life into an environment ready for it, what sort of life would you choose? Enceladus, like any other body on which this was attempted, would pose its own formidable constraints, but the broader question of whether life ought to be introduced into such environments is open to considerable philosophical debate. Just what constitutes planetary protection?

Of course, Enceladus offers us plenty of work before we ever reach the stage of attempting such a thing. For one thing, we’d like to know whether those intriguing plumes are transient or long-term. We’ll need information about the presence of oxidants in this environment, along with information on surface properties to study impact erosion and resurfacing. And we need a world of information about the chemical evolution of organics in ice in the presence of energetic particles.

The list could continue, but I turn you over to the paper, which is Parkinson et al., “Enceladus: Cassini observations and implications for the search for life,” in Astronomy & Astrophysics 463 (2007), pp. 353-357 (available online).