The outer Solar System has always been something of an obsession for me, to the point where as a kid, I used to haunt the libraries looking for books on planetary science. Absurdly, I had the notion that even though little was known about places like Triton and Pluto, I might just stumble upon the one book that had details known to no one else. So I would work my way through the shelf, finding the odd speculation here, the small insight there, but it wouldn’t be until Voyager’s 1989 Neptune flyby that some of these places began to take on actual shape for all of us.

All the Myriad Ways

And then there was Larry Niven’s ‘Wait It Out,’ a short story from the Known Space universe that was originally published in 1968, in a wonderful collection called All the Myriad Ways. Here a team of astronauts on the surface of Pluto is marooned and the narrator, after his comrade has died, removes his helmet, freezing to death so quickly that his brain becomes a superconductor, so that a strange form of consciousness persists. The things you read when you’re young stick with you, and the strange awareness of the frozen narrator still comes to mind when I think about New Horizons and the things it will find at Pluto/Charon in just a few more years.

I can’t resist a brief quote from Niven’s story:

I stand as a statue and a viewpoint. Now wonder I can’t get emotional about anything. Water is a rock here, and my glands are contoured ice within me. But I feel sensations: The pull of gravity, the pain in my ears, the tug of vacuum over every square inch of my body. The vacuum will not boil my blood. But the tensions are frozen into the ice of me, and my nerves tell me so. I feel the wind whistling from my lips, like an exhalation of cigarette smoke.

Getting our protagonist rescued by a ship from Earth may be the least of his problems, for he’ll have to be thawed out to survive. But Niven covers that my noting that ‘half a million corpses lie frozen in vaults surrounded by liquid nitrogen’ back on Earth. In other words, they’re working on it.

Neptune and the Kuiper Belt

But back to reality. It’s been the week of the American Astronomical Society’s Division of Planetary Sciences conference in Pasadena, which is always good for an outer planet fix that puts my old library method to shame. Several interesting items come to mind not just about Pluto but other objects including Neptune, which has been studied in terms of its effects on binary objects in the Kuiper Belt. This work, done by Alex Parker and J.J. Kavelaars (Herzberg Institute of Astrophysics) traded on the fact that binaries can be affected by their environment, and therefore become a testbed that through computer simulations can tell us something about the Kuiper Belt’s past.

Have a look at the image to see the process at work. Here, Neptune exerts tidal forces that disrupt the binary. According to the simulations, many binary systems should have been destroyed by this jostling, too many to explain the stability of the Kuiper Belt we see today. That has ramifications on earlier Kuiper Belt theories. 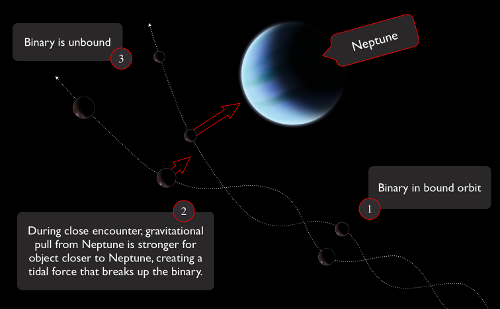 At stake is what astronomers call the ‘Classic Cold Kuiper Belt,’ one explanation for which is that it formed during numerous interactions with Neptune. The new work seems to rule out some aspects of that theory, according to Parker, who says: “These binaries with slow, wide orbits are a hallmark of the Cold Classical Kuiper Belt, and they would not be there today if the members of this part of the Kuiper Belt were ever hassled by Neptune in the past.” The implication is that the Kuiper Belt formed more or less where it is now and has remained undisturbed over the age of the system.

And it’s not just the influence of an outer planet but also the site of Kuiper Belt formation that’s at stake. One proposed model for Neptune involvement has been that the objects of the Classic Cold Kuiper Belt would have formed closer to the Sun than their present distances, and then been scattered outwards through the Neptune interactions. The binary studies argue against that interpretation:

…these results would require more primordial binaries than even a binary fraction of 100% would allow, suggesting that wide binaries such as 2001 QW322 were not subjected to a period of close encounters with Neptune. This implies that a component of the Cold Classical Kuiper Belt was not emplaced by scattering from lower heliocentric orbits, but either had to form in situ or be implanted by a gentler mechanism in order to preserve its population of wide binaries.

Exploring the Surfaces of KBOs

The DPS sessions also produced interesting dwarf planet news, in this case about Eris, the largest of these objects currently known. Here a team led by Stephen Tegler (Northern Arizona University) has gone to work studying the remote surface of Eris, growing ice samples of methane, nitrogen, argon, methane-nitrogen and methane-argon mixtures in a vacuum chamber at the -235 degrees Celsius temperature of Eris (and if anything can turn a person’s brain into a superconductor, the temperature of the surface of Eris should do the trick).

The method was, having produced these ices, to pass light through the samples to study the ‘chemical fingerprints’ of molecules and atoms, which were then compared to telescopic observations not only of Eris but Pluto. David Cornelison (Missouri State) explains the result:

“By combining the astronomical data and laboratory data, we found about 90 percent of Eris’s icy surface is made up of nitrogen ice and about 10 percent is made up of methane ice, which is not all that different from Pluto.”

Not surprising, but a needed measurement as we study the properties of the larger Kuiper Belt objects to understand how planets formed in these distant regions. Northern Arizona University’s ice lab should prove to be a helpful place as we carry on this work, helping us understand the processes at work on KBO surfaces. And all of this should play usefully into preparations for the New Horizons encounter, on course for a 2015 flyby to remember.