Alpha Centauri B: A Close Look at the Habitable Zone

The dreams of Alpha Centauri I used to have as a boy all focused on visual effects. After all, the distance between Centauri A and B ranges from 11.4 to 36.0 AU. What would it be like to have a second star in our Solar System, one that occasionally closed to a little more than Saturn’s distance from the Sun? What would a day be like with two stars, and even more, what would night be like with a star that close lighting up the landscape? I also wondered about how much effect a second star would have on the planets in our system, curious as I was about gravitational effects and even the possible repercussions for weather and seasonal change. 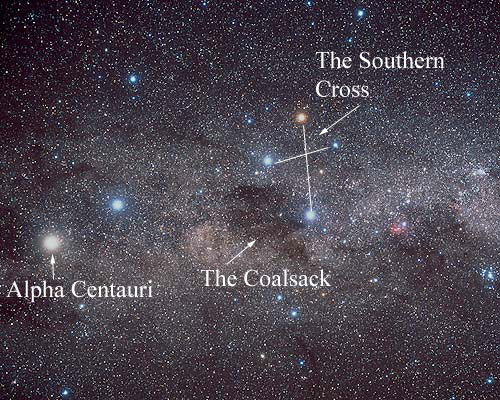 Image: The Alpha Centauri star system and other objects near it in the sky. Image copyright Akira Fujii / David Malin Images.

You can imagine, then, that Duncan Forgan’s new paper hit close to home. Forgan (University of Edinburgh) has taken discussions of habitability around Centauri B to a new level by analyzing the effect of Centauri A on habitability using latitudinal energy balance models that allow him to study how small changes in the properties of a planet can affect the overall climate there. Such models have been useful in studying things like climate variability due to orbital eccentricity and other factors, and Forgan puts them to work to chart the effect of a binary companion.

Before I get into the results of the habitability study, though, I want to go through some of the more recent work on Alpha Centauri, all summarized carefully in the Forgan paper. Indeed, I point you to this paper with great assurance that if you are interested in the Centauri stars, you’ll find a useful bibliography and summary here that will quickly get you up to speed (though the bibliography would be better if it listed paper titles along with the rest of the citations). Let’s run through some of the more salient work — in most cases I’ll skip the authors and citations in this discussion, knowing that Forgan’s work containing all of these is freely available at the arXiv site.

Centauri A and B, being high metallicity stars, are presumably prime candidates for circumstellar disks with a high solid material component, making the building blocks of planets readily available, and deepening the spectral lines for improved precision in radial velocity studies. Another useful factor for observations is that the binary is inclined by only 11 degrees with respect to our line of sight, an important fact because it means that any planets we discover through RV methods will yield a mass that is fairly accurate, assuming that the planets around these stars have formed in the same orbital plane. Without such knowledge, the mass figures from RV studies vary widely depending on assumptions about the target system’s inclination.

Studies on planet formation have shown that both Centauri A and B should be capable of forming terrestrial planets even when the perturbations caused by the binary companion are taken into account. Early studies on this question have found that the planetesimal disks seem to be stable out to about 3 AU of the parent stars, assuming a reasonable inclination of the disk relative to the binary plane, meaning something less than 60 degrees. More recent work by Thébault and colleagues has shown that the later stages of accretion may not be efficient because the binary companion can inhibit the growth of larger objects outside 0.75 AU (Cen A) and 0.5 AU (Cen B).

What does this mean? Most likely that the formation of gas giants is unlikely here (a finding that squares with previous radial velocity surveys), while if we can get past the problem of forming larger planetesimals referred to above, Earth-mass planets should be able to form in the habitable zone of Centauri B, assuming an eccentricity of no more than 0.3. A 2009 study I’m not familiar with by Michtchenko & Porto de Mello makes the case that any terrestrial planets that do form in Centauri B’s habitable zone should be dynamically stable despite perturbations from Centauri A under certain conditions of eccentricity and orbital inclination, but planets with inclinations to the orbital plane larger than about 35 percent should experience strong instability.

So where is the habitable zone around Centauri B? Kasting and team used a model that assumed Earth-mass planets with similar atmospheric composition and found a habitable zone ranging from 0.5 to 0.9 AU, although this 1993 study did not include the perturbing influence of Centauri A. But Forgan notes this with regard to the light reaching Centauri B planets:

If main sequence relations for the luminosity of each object are assumed, the insolation experienced by planets in the habitable zone of α Cen B due to α Cen A would be no more than a few percent of the total insolation of the α Cen AB system at the binary’s periastron, and around one tenth of a percent at apastron. This insolation can be diminished further by eclipses of α Cen A by α Cen B, the duration of which is estimated to be of order a few Earth days.

Tuning the Model for Centauri B

Kasting was using a global radiative balance model (GRBM), but he and other researchers later deployed latitudinal energy balance models (LEBMs) of the kind Forgan uses in his new study, the latter being more complex and incorporating assumptions about latitude and season and other properties that would be temperature dependent. Forgan adjusts the model to include the effects of the binary (neglecting the distant M-dwarf Proxima Centauri). From the paper:

A planet in global radiative balance is not in general in local radiative balance, and by extension habitability is not a discrete concept (i.e. either habitable or uninhabitable), but a continuous one, where a certain fraction of the planet’s surface will be habitable at any given time. In the LEBM, the evolution of the planet’s temperature T (λ) is described by a diffusion equation made nonlinear by the addition of the heating and cooling terms, as well as an albedo which makes a rapid transition from low to high as temperature decreases past the freezing point of water. As a result, small changes in the properties of a planet can strongly affect the resultant climate.

The latitudinal energy balance model, then, seems the best approach for asking how the perturbations caused by Centauri A might affect planets in the habitable zone of Centauri B.

So what does Forgan find? It turns out that calculating the habitable zone of Centauri B’s inner and outer boundaries can be roughly correct if we leave Centauri A out of the picture — the dimensions of the habitable zone remain more or less the same. But adding Centauri A does create oscillations in the planet’s climate that happen when Centauri A is at its closest to Centauri B. The temperature variations caused by Centauri A are no more than several K, and could alter the fraction of habitable surface on planets at the habitable zone boundaries by about 3 percent, a figure made flexible depending on the size of oceans or planetary obliquity.

The paper goes on to note the possible effect on life (science fiction writers take note):

It is reasonable to speculate that if life were to exist on planets around α Cen B, that they may develop two circadian rhythms (cf Breus et al. 1995) corresponding to both the length of day around the primary, and the period of the secondary’s orbit (approx 70 years). Altering the available habitat by a few percent may also inﬂuence migration patterns and population evolution.

Small changes over time, though, can lead to big results, as Forgan goes on to remind us:

While we have demonstrated that the temperature ﬂuctuations for planets around α Cen B due to α Cen A are relatively small, the consequences of a periodic temperature forcing of a few K to long term climate evolution cannot be fully understood from this work. To fully appreciate the impact on (for example) ocean circulation and carbonate-silicate cycles requires further investigation with more advanced climate models.

Simulations and Their Limitations

The paper analyzes the results of the simulation for different classes of planets, from fully habitable worlds to uninhabitable hot planets, uninhabitable snowball planets, and two other classes — eccentric transient planets and binary transient planets — that are both partially habitable, with the habitability oscillating according to either the planet’s orbit around Centauri B (eccentric transients) or the period of Centauri A (binary transients). Forgan is careful to comment on the limitations of the LEBM model, which is not sensitive to long-term climate processes, and he notes that adding clouds and a carbonate-silicate cycle into the mix would potentially extend the outer edge of the habitable zone. Another limitation: The model is not sensitive to planets with extremely slow rotations.

Nevertheless, previous work with such modeling has shown its effectiveness, and the picture of the potential Centauri B system that emerges is one in which habitable worlds could well flourish. On the latter score, one other note:

The inner edge of the habitable zone is less well-deﬁned than the outer edge – atmospheric changes could allow liquid water above 373 K, and the runaway greenhouse effect may become important at temperatures nearer 350 K (Spiegel et al. 2008 and references within). In any case, the outer edge is likely to be more interesting from an astrobiological standpoint, as current and future instrumentation will be more capable of prob[ing] spectral features of planets at larger semi-major axes (see e.g. Kaltenegger & Selsis 2010).

What’s needed now, of course, are radial velocity results from the ongoing studies of Alpha Centauri, which will begin to tell us whether or not rocky terrestrial worlds actually exist there. This is tricky work — radial velocity methods are much happier with huge gas giants in close orbits than with small rocky planets, which demand a much longer analysis. The paper is Forgan, “Oscillations in the Habitable Zone around Alpha Centauri B,” accepted for publication in Monthly Notices of the Royal Astronomical Society (preprint) and highly recommended to anyone with an interest in planets around our nearest stellar system.