The Best Pluto Imagery Yet

I finally have a landscape to attach to Larry Niven’s classic “Wait It Out,” a tale of shipwreck on Pluto. The New Horizons imagery is giving us resolutions of 77-85 meters per pixel, so that we can, as this JHU/APL news release reminds us, see features less than half the size of a city block. The one below is the one that has me captivated because it reminds me of the Niven tale, in which a team of astronauts becomes stranded on Pluto’s surface, and the protagonist deliberately exposes himself to the vacuum to place himself into cryogenic storage.

A man can stay conscious for tens of seconds in vacuum. If I moved fast, I could get out of my suit in that time. Without that insulation to protect me, Pluto’s black night would suck warmth from my body in seconds. At 50° Absolute, I’d stay in frozen storage until one version or another of the Day of Resurrection.

Niven wrote “Wait It Out” in 1968, published it in a science fiction convention program book, then in an anthology edited by Robert Silverberg, before its 1971 publication in All the Myriad Ways, perhaps my favorite of all the Niven short story collections. Ever since reading it, I’ve thought about what the frozen astronaut would see, described by Niven as a row of frozen mountains over which “the stars pour up in singletons and clusters and streamers…”

Now I can envision our protagonist on Sputnik Planum, on a relatively smooth block of nitrogen crustal ice looking out toward the al-Idrisi mountains. The images below were all made with New Horizons’ Long Range Reconnaissance Imager (LORRI) about fifteen minutes before the spacecraft’s closest approach to Pluto, at a range of 17,000 kilometers. We’re seeing the results of LORRI recording images every three seconds using unusually short exposures. 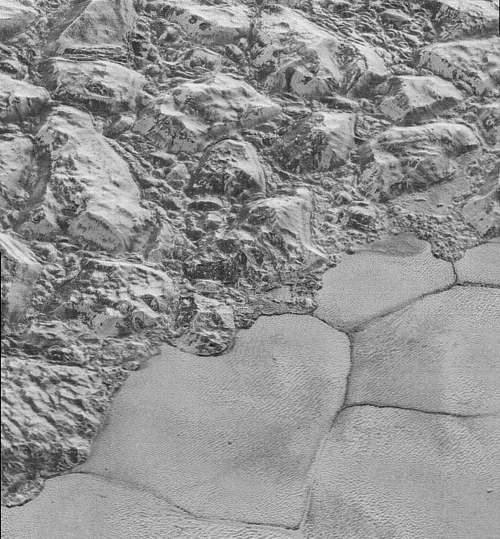 Image: In this highest-resolution image from NASA’s New Horizons spacecraft, great blocks of Pluto’s water-ice crust appear jammed together in the informally named al-Idrisi mountains. Some mountain sides appear coated in dark material, while other sides are bright. Several sheer faces appear to show crustal layering, perhaps related to the layers seen in some of Pluto’s crater walls. Other materials appear crushed between the mountains, as if these great blocks of water ice, some standing as much as 2.5 kilometers high, were jostled back and forth. The mountains end abruptly at the shoreline of the informally named Sputnik Planum, where the soft, nitrogen-rich ices of the plain form a nearly level surface, broken only by the fine trace work of striking, cellular boundaries and the textured surface of the plain’s ices (which is possibly related to sunlight-driven ice sublimation). This view is about 80 kilometers wide. Credit: NASA/Johns Hopkins University Applied Physics Laboratory/Southwest Research Institute.

The magnitude of New Horizons’ success is reflected in the quality of this and the images that follow below, which are about five times better than the best images of Triton we received from Voyager 2 back in 1989. And principal investigator Alan Stern has made the point that when we were first exploring Mars and Venus, it took decades to develop the ability to see with this level of detail. Our instrumentation has come a long way, and so has this one-shot flyby mission, which has demonstrated how much can be done even when an orbiter is not available.

As to that view that reminds me of the Niven tale, New Horizons team member John Spencer describes it well:

“The mountains bordering Sputnik Planum are absolutely stunning at this resolution. The new details revealed here, particularly the crumpled ridges in the rubbly material surrounding several of the mountains, reinforce our earlier impression that the mountains are huge ice blocks that have been jostled and tumbled and somehow transported to their present locations.”

Two other recently released images follow. With New Horizons now 167 million kilometers beyond Pluto and 5.2 billion kilometers from the Earth, all systems remain operational and we can expect still more imagery from this data set over the next few days. 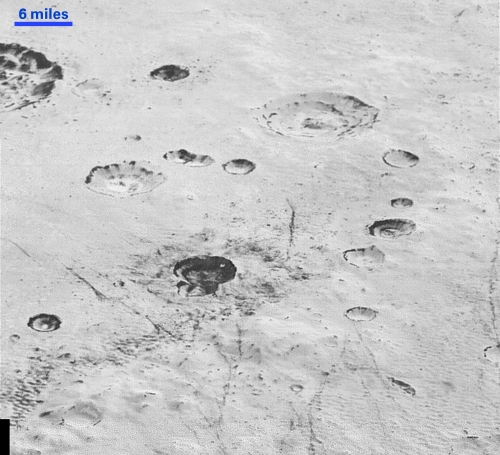 Image: Notice the layering in the interior walls of many craters (the large crater at upper right is a good example) – layers in geology usually mean an important change in composition or event but at the moment New Horizons team members do not know if they are seeing local, regional or global layering. The darker crater in the lower center is apparently younger than the others, because dark material ejected from within – its “ejecta blanket” – have not been erased and can still be made out. The origin of the many dark linear features trending roughly vertically in the bottom half of the image is under debate, but may be tectonic. Most of the craters seen here lie within the 250-kilometer-wide Burney Basin, whose outer rim or ring forms the line of hills or low mountains at bottom. The basin is informally named after Venetia Burney, the English schoolgirl who first proposed the name “Pluto” for the newly discovered planet in 1930. Credit: NASA/Johns Hopkins University Applied Physics Laboratory/Southwest Research Institute. 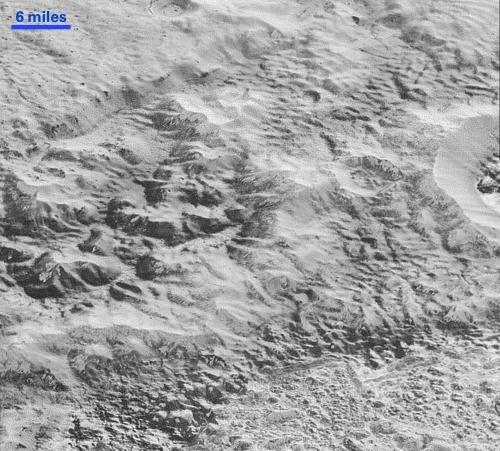 Image: This image shows how erosion and faulting has sculpted this portion of Pluto’s icy crust into rugged badlands. The prominent 2-kilometer-high cliff at the top, running from left to upper right, is part of a great canyon system that stretches for hundreds of kilometers across Pluto’s northern hemisphere. New Horizons team members think that the mountains in the middle are made of water ice, but have been modified by the movement of nitrogen or other exotic ice glaciers over long periods of time, resulting in a muted landscape of rounded peaks and intervening sets of short ridges. At the bottom of this 80-kilometer-wide image, the terrain transforms dramatically into a fractured and finely broken up floor at the northwest margin of the giant ice plain informally called Sputnik Planum. Credit: NASA/Johns Hopkins University Applied Physics Laboratory/Southwest Research Institute.