A Volcanic View of the Habitable Zone

Our understanding of habitable zones is a work in progress, but the detection of multiple planets with potentially water-bearing surfaces around TRAPPIST-1 is heartening. Today we examine the prospect of extending the habitable zone further out from the host star than previously thought possible. The idea is found in new work by Ramses Ramirez and Lisa Kaltenegger (both at the Carl Sagan Institute at Cornell University). Volcanism is the key, allowing interactive effects that pump up greenhouse warming and sustain habitability. 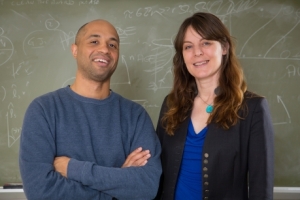 Go back for a moment to the habitable zone limits that Andrew LePage looked at yesterday in his analysis of TRAPPIST-1. The classical habitable zone — allowing liquid water to exist on the surface — has an inner edge at which surface temperatures become high enough to lead to a runaway greenhouse and the rapid loss of water. The outer edge is defined by the distance beyond which CO2 can no longer produce the needed greenhouse effect to keep the surface warm.

But consider, say Ramirez and Kaltenegger, the effect of additional greenhouse gases on these worlds at the outer edge of the HZ. Here’s some context: The warming effect of hydrogen atmospheres has already been considered on young planets, allowing a primordial super-Earth to stay above freezing at the surface out to distances in the range of 10 AU. The paper explains that this greenhouse effect comes from what is known as collision-induced absorption, the result of so-called ‘self-broadening’ when H2 molecules collide.

The problem: Primordial hydrogen in the large amounts needed isn’t sustainable over geological timescales, meaning a super-Earth without a renewable hydrogen source would lose hydrogen to space. But volcanism can be the renewable source needed. The authors point out that climate studies of the early Earth and Mars both show that volcanism could have outpaced the escape of H2. Hydrogen here is not a major atmospheric constituent but is continually replenished by volcanism that offsets H2 loss.

Now we are in a situation where any atmospheric CO2 can interact with hydrogen to increase the greenhouse warming potential for the planet over long time periods. The effect could extend a habitable zone by between 30 and 60 percent. Says Ramirez:

“On frozen planets, any potential life would be buried under layers of ice, which would make it really hard to spot with telescopes. But if the surface is warm enough – thanks to volcanic hydrogen and atmospheric warming – you could have life on the surface, generating a slew of detectable signatures.” 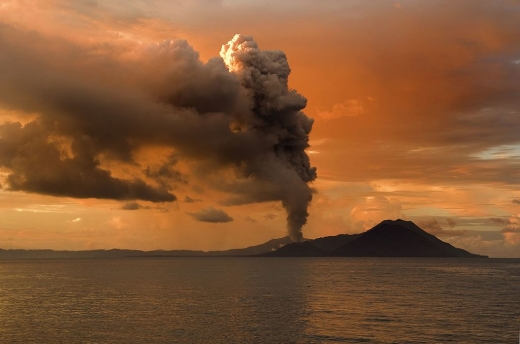 Image: The eruption of the Tavurvur volcano in Papua New Guinea, part of the Rabaul Caldera on New Britain. Can similar eruptions produce the factors needed for habitability at the outer edge of the habitable zone? Credit: Taro Taylor edit by Richard Bartz – originally posted to Flickr as End Of Days, CC BY 2.0.

In terms of our own Solar System, the researchers point out that the addition of 30% H2 can extend the habitable zone to 2.4 AU, putting its outer edge in the main asteroid belt (the habitable zone around Sol is normally considered to extend to 1.67 AU, just beyond the orbit of Mars). Because we’ll be looking for atmospheric biosignatures with upcoming instruments like the James Webb Space Telescope and the European Extremely Large Telescope, we’ll want to factor this extended habitable zone into our list of search candidates.

In their paper, which appears in The Astrophysical Journal Letters, the researchers use climate models to compute the boundaries of what they are calling the ‘volcanic hydrogen habitable zone’ for concentrations of hydrogen between 1% and 50% — finding that at a hydrogen concentration at the upper end of that range, the effective stellar flux needed to support the outer edge of the habitable zone decreases by ~35% to 60%, with the corresponding orbital distances to remain habitable increasing by 30% to 60%. The effective temperatures (TEFF of the stars examined range from 2,600K to 10,000K — the stellar classes range from M dwarfs to A-type main sequence stars.

Given these prospects, how do we go about searching for life signatures on outer planets with sizeable amounts of atmospheric hydrogen? It’s a vexing question:

Certain atmospheric spectral features, including N2O and NH3, which can, but do not have to be produced biotically, could be detected in H2 -dominated atmospheres (Seager et al., 2013; Baines et al., 2014). Such volcanic-hydrogen atmospheres may also be able to evolve methane-based photosynthesis (Bains et al., 2014). Distinguishing biosignatures from abiotic sources in such atmospheres will be challenging.

Note the possibilities that must be distinguished here:

NH3 can be formed abiotically through reaction of N2 and H2 in hydrothermal vents on planets with reducing mantles (Kasting et al., 2014). N2O can be formed a number of ways including through atmospheric shock from meteoritic fall-in, lightning, UV radiation (e.g. Ramirez, 2016) and through solar flare interactions with the magnetosphere (Airapetian et al., 2016). Thus, future biosignature studies should focus on modeling biotic and abiotic sources for these gases in thin volcanic-hydrogen atmospheres.

Clearly there is plenty of work ahead, but a combined greenhouse effect from hydrogen, water and CO2 could be the key to expand stellar habitable zones and widen our observational window. As Kaltenegger puts it, “Where we thought you would only find icy wastelands, planets can be nice and warm – as long as volcanoes are in view.” And warming hydrogen, all too easily lost into space, can be renewed by the same kind of volcanic hydrogen that puffs up planetary atmospheres, making that much stronger a signal for the detection of biomarkers.

Does TRAPPIST-1, then, have the capacity for yet another planet in the habitable zone? Kaltenegger isn’t ready to go that far, saying “…uncertainties with the orbit of the outermost Trappist-1 planet ‘h’ mean that we’ll have to wait and see on that one,”

The paper is Ramirez and Kaltenegger, “A Volcanic Hydrogen Habitable Zone,” The Astrophysical Journal Letters 837, No. 1 (2017). Abstract available.