On the GW170814 Gravitational Wave Detection

What we get with yesterday’s gravitational wave announcement isn’t a breakthrough in itself. After all, this is not the first but the fourth detection of a black hole merger, so as we enter the era of gravitational wave astronomy, we’re beginning to build our catalog of exotic objects.

But the gravitational wave known as GW170814 is significant because of the addition of the Virgo Gravitational-Wave Observatory to our toolkit. We ramp up our capabilities at locating the objects we detect in the sky when we factor in this new detector. Thus Chad Hanna (Penn State), who served as co-chair of the group within LIGO (Laser Interferometer Gravitational-Wave Observatory) that made all previous detections: 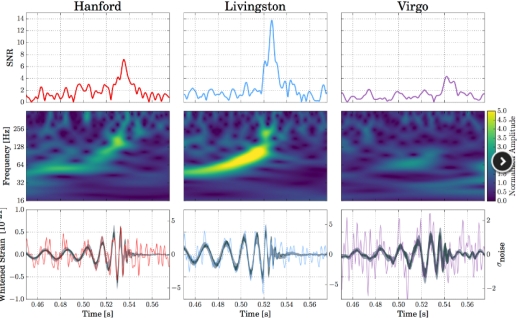 Image: Top row: Signal-to-noise ratio as a function of time. The peaks occur at different times in different detectors because gravitational waves propagate at the finite speed of light; this causes the signal to reach the detectors at different times. GW170814 arrived first in LIGO-Livingston, then 8 ms later in LIGO-Hanford and 6 ms after that in Virgo. Middle row: Time-frequency representation of the strain data. The brighter a given pixel in any of the three 2D-maps, the larger the signal at this particular time and frequency with respect to the expected noise level. Note the characteristic “chirp” pattern of increasing frequency with time. Bottom row: Strain time series with the best waveforms selected by the matched filtering (black solid curves) and unmodeled search methods (gray bands) superimposed. Credit and copyright: LIGO Scientific Collaboration and Virgo Collaboration.

Gravitational wave astronomy is less than two years old, but we’re adding substantial resources to the investigation with the addition of the Virgo detector. Located near Pisa, the Italian effort involves more than 280 physicists and engineers in 20 different European research groups. The Virgo detector took data jointly with the two LIGO observatories, one in Livingston, Louisiana and the other at Hanford in Washington state, in a network that also included contributions from the Anglo-German GEO600 instrument near Hanover.

The network observed GW170814 on August 14, only two weeks after the Virgo detector began taking data. Subsequent analysis showed that the event marked the merger of two black holes of 31 and 25 solar masses respectively, occurring at a distance of 1.8 billion light years. The newly produced black hole is thought to have 53 times the mass of the Sun, with three solar masses being converted into gravitational wave energy during the coalescence of the constituent black holes.

And here is where the triangulation comes in. The gravitational wave arrived at the Livingston detector some 8 milliseconds before the LIGO detector at Hanford, and some 14 milliseconds before reaching the Virgo detector. Combined arrival time delays allows the direction toward the source to be determined. Researchers are saying they can trace it down to a patch of 60 square degrees in the southern sky between the constellations Eridanus and Horologium. Moving from a two- to three-detector network shrinks the volume of sky likely to contain a source by more than a factor of 20, according to this LIGO Scientific Collaboration news release. 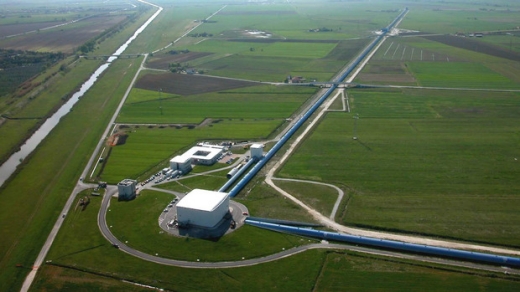 Scientists at the Albert Einstein Institute in Potsdam and Hanover ruled out random noise fluctuations, finding the signal to be real with a probability of more than 99 percent. The Hanover team developed many of the software algorithms used in the analysis of LIGO data.

A third observatory ensures that future detections will be accompanied by a search for the source at all these wavelengths as we begin to extend gravitational wave astronomy into events beyond black hole collisions.

“This is just the beginning of observations with the network enabled by Virgo and LIGO working together,” says David Shoemaker of MIT, LIGO Scientific Collaboration spokesperson. “With the next observing run planned for Fall 2018 we can expect such detections weekly or even more often.”

The paper on this event, accepted at Physical Review Letters, is LIGO Scientific Collaboration and The Virgo Collaboration, “GW170814 : A three-detector observation of gravitational waves from a binary black hole coalescence” (available online).