Although so-called Dysonian SETI has been much in the air in recent times, its origins date back to the birth of SETI itself. It was in 1960 – the same year that Frank Drake used the National Radio Astronomy Observatory in Green Bank, West Virginia to study Epsilon Eridani and Tau Ceti – that Freeman Dyson proposed the Dyson sphere. In fiction, Olaf Stapledon had considered such structures in his novel Star Maker in 1937. As Macy Huston and Jason Wright (both at Penn State) remind us in a recent paper, Dyson’s idea of energy-gathering structures around an entire star evolved toward numerous satellites around the star rather than a (likely unstable) single spherical shell.

We can’t put the brakes on what a highly advanced technological civilization might do, so both solid sphere and ‘swarm’ models can be searched for, and indeed have been, for in SETI terms we’re looking for infrared waste heat. And if we stick with Dyson (often a good idea!), we would be looking for structures orbiting in a zone where temperatures would range in the 200-300 K range, which translates into searching at about 10 microns, the wavelength of choice. But Huston and Wright introduce a new factor, the irradiation from the interior of the sphere onto the surface of the star.

This is intriguing because it extends our notions of Dyson spheres well beyond the habitable zone as we consider just what an advanced civilization might do with them. It also offers up the possibility of new observables. So just how does such a Dyson sphere return light back to a star, affecting its structure and evolution? If we can determine that, we will have a better way to predict these potential observables. As we adjust the variables in the model, we can also ponder the purposes of such engineering.

Think of irradiation as Dyson shell ‘feedback.’ We immediately run into the interesting fact that adding energy to a star causes it to expand and cool. The authors explain this by noting that total stellar energy is a sum of thermal and gravitational energies. Let’s go straight to the paper on this. In the clip below, E* refers to the star’s total energy, with Etherm being thermal energy:

When energy is added to a star (E∗ increases), gravitational energy increases and thermal energy decreases, so we see the star expand and cool both overall (because Etherm is lower) and on its surface (because, being larger at the same or a lower luminosity its effective temperature must drop). A larger star should also result in less pressure on a cooler core, so we also expect its luminosity to decrease. 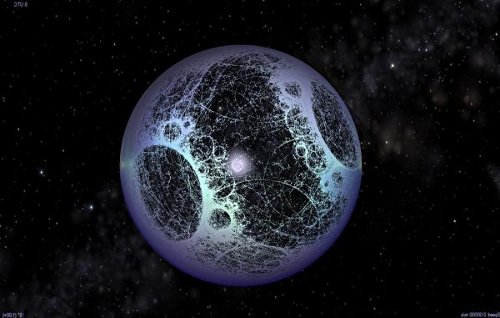 Digging into this effect, Huston and Wright calculate the difference in radius and temperature between the normal and irradiated stellar models. Work on irradiated stars goes back to the late 1980s, and includes the interesting result that a star of half a solar mass, if subjected to a bath of irradiation at a tempearature of 104 K, has its main sequence lifetime shortened by approximately half. The star expands and cools overall, but the distribution of the thermal energy causes its central temperature to increase.

A bit more on this background work: The 1989 paper in question, by C. A. Tout and colleagues, has nothing to do with Dyson spheres, but provides data on stellar irradiation of the sort that would be produced by proximity to a quasar or active galactic nucleus. Tout et al. worked on isotropic radiation baths at constant temperatures up to 104 K, finding that while the effects on stars whose energy is radiative are minor, convective stars increase in size. Keep in mind that cooler stars of low-mass are fully convective; hotter and more massive stars transport their energies from the interior through a radiative zone that forms and expands from the core.

Applying this to Dyson spheres, a star surrounded by technology would have light reflected back onto the star, while at the same time the sphere would become warm and emit thermal energy. I was intrigued to see that the paper gives a nod to Shkadov thrusters, which we’ve discussed in these pages before – these are stellar ‘engines’ using a portion of a star’s light to produce a propulsive effect. See Cosmic Engineering and the Movement of Stars, as well as Greg Benford’s look at the physics of the phenomenon, as developed by himself and Larry Niven, in Building the Bowl of Heaven.

Huston and Wright model how a Dyson sphere would affect the structure and evolution of a star, incorporating Dyson sphere luminosity as returned to the surface of the star. Each star is modeled from the start of its enclosure within the Dyson Sphere to the end of its main sequence lifetime. Beyond luminosity, the authors use Wright’s previous work on Dyson sphere parameters and his formulation for radiative feedback, while deploying a tool called Modules for Experiments in Stellar Astrophysics to assist calculations.

The authors consider stars in a mass range from 0.2 to 2 solar masses while varying luminosity fractions from 0.01 to 0.50. The effects of energy feedback on stars and the calculations on Dyson sphere properties produce absolute magnitudes for combined systems incorporating a central star and the Dyson sphere around it. From the paper:

Irradiated stars expand and cool. A Dyson sphere may send a fraction of a star’s light back toward it, either by direct reflection or thermal re-emission. This returning energy can be effectively transported through convective zones but not radiative zones. So, it can have strong impacts on low mass main sequence stars with deep convective zones which extend to the surface. It causes them to expand and cool, slowing fusion and increasing main sequence lifetimes. For higher mass stars with little to no convective exterior, the returned energy cannot penetrate far into the star and therefore has little effect on the star’s structure and evolution, besides some surface heating.

The effects are observationally significant only for spheres with high reflectivity or high temperatures – remember that Dyson assumed a sphere in the ~300 K area to correspond to a planet in the habitable zone. The authors combine the spectrum of the host star and the Dyson sphere into a ‘system spectrum,’ which allows them to calculate absolute magnitudes. The calculations involve the star itself, the interior of the sphere (both would be hidden) and the exterior of the sphere, which would be unobscured.

Wright has previously developed a set of five defining characteristics of a Dyson sphere, involving the intercepted starlight, the power of the sphere’s thermal waste heat, its characteristic temperature and other factors in a formalism called AGENT. The authors run their calculations on hot Dyson spheres and their opposite – cold, mirrored Dyson spheres that return starlight to the star without significant heating. Thus we go through a range of Dyson spheres intercepting starlight, including the familiar notion:

As the classical idea of a Dyson sphere, we can examine a solar mass star with low transmission of starlight through the sphere and a Dyson sphere radius of roughly 1 AU. We see that the feedback levels are very low and that the systems will appear, relative to a bare solar mass star, to be dimmed in the optical range and reddened in both optical and infrared colors.

Notice the range of temperatures we are talking about, for this is where we can expand our thinking on what a Dyson sphere might involve:

Dyson spheres in the latter temperature ranges are utterly unlike the more conventional concept of a civilization maintaining habitable conditions within the shell to gain not just energy but vastly amplified living space. But a hot Dyson sphere could make sense from the standpoint of stellar engineering, for feedback mechanisms can be adjusted to extend a star’s lifetime or reduce its luminosity. Indeed, looking at Dyson spheres in the context of a wide range of feedback variables is useful in helping jog our thinking about what might be found as the signature of an advanced technological civilization.

The paper is Huston & Wright, “Evolutionary and Observational Consequences of Dyson Sphere Feedback,” accepted at the Astrophysical Journal (abstract / preprint). The paper by Tout et al. is “The evolution of irradiated stars ,” Monthly Notices of the Royal Astronomical Society Volume 238, Issue 2 (May 1989), pp. 427–438 (abstract). For an overview of Dyson spheres and their background in the literature, see Wright’s “Dyson Spheres,” Serbian Astronomical Journal Issue 200, Pages: 1-18 (2020). Abstract / preprint. Thanks to my friend Antonio Tavani for the early pointer to this work.