A Discouraging Outlook for Centauri A Planets

The news about planetary prospects around the Centauri stars has been positive enough lately that a paper suggesting otherwise introduces a rather jarring note (to me, at least). After all, we’ve detected more than forty extrasolar planets in multiple systems, a significant percentage of all detected exoplanets, and while most of these are in systems where the stars are widely spaced, there are planets around stars like Gliese 86 or Gamma Cephei where the separations are in the range of a Centauri-like 20 AU. Moreover, key studies have shown that planetary orbits in the habitable zone of the Centauri stars are viable.

But what Philippen Thébault (Stockholm Observatory), Francesco Marzari (University of Padova) and Hans Scholl (Observatoire de la Côte d’Azur) bring to the table is a different question. Never mind that planetary orbits may be stable — how likely are planets to form in these settings in the first place? It turns out that the last stage of planet formation has been studied, with no deal-breaking restraints on at least some planets in close binary systems if the stars are separated by more than 5 AU. The new work, however, focuses on an earlier stage, the accretion of small planetesimals that leads to so-called planetary ’embryos.’ 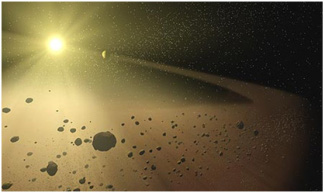 And here the news is much less positive for those of us hoping to find terrestrial worlds around such stars. The companion star can cause such perturbations that the kilometer-sized planetesimals involved collide at high speeds, moving too rapidly to allow them to gradually merge into a larger object. Earlier work by these authors has shown that the efficiency of runaway growth is quite sensitive to encounter velocities in budding planetary systems. The current paper now applies these results to the situation around Centauri A.

The results: Beyond a close 0.5 AU, Centauri A “…is hostile to kilometre-sized planetesimal accretion.” In fact, say the authors, using any realistic distribution of planetesimals, these high-impact events outnumber low-velocity encounters by far. What’s worse, “…our approach can be regarded as conservative regarding the extent of the impact velocity increase which is reached, the ‘real’ system being probably even more accretion-hostile than in the presented results.” That makes Centauri A an unlikely place for habitable worlds like our own.

Image: Artist’s conception of the debris disk surrounding the Sun-like star, HD 12039. Planetesimals like these are thought to be the building blocks of planets. But will they form planets in the binary environment of Centauri A? Credit: NASA/JPL-Caltech; T. Pyl, SSC.

Contrasting this outcome with earlier studies that found planet formaton possible in the region inside 2.5 AU of Centauri A, the authors explain why their work comes to such a radically different conclusion:

This is because these studies focused on the later embryo-to-planet phase, thus implicitly assuming that the preceding planetesimal-to-embryo phase was successful. The present study shows that this is probably not the case. This conﬁrms that the planetesimals-to-embryos phase is more affected by the binary environment than the last stages of planet formation.

How to extrapolate these results to other stars? The authors are reluctant to do so, not even to nearby Centauri B, the perturbing star in the Centauri A scenario. The reason is that the mathematical modeling here is based both upon the perturbations caused by the nearby star as well as the relationship between those perturbations and the effects of gas drag in the early system, which shape the movements of planetesimals. The byplay between these forces is complex and obviously varies from star to star, which is one reason we have so far to go in understanding how planets form in binary systems.

Can we imagine planetary migration from inner orbits into the habitable zone? Perhaps, but this would assume interactions between multiple planets and a sizeable disk of remaining planetesimals. The authors run through other scenarios that would produce Centauri A planets at 1 AU or greater, including the possibility that the Centauri stars were originally in a different configuration than today, thus setting up a new set of initial conditions. The latter can’t be ruled out, but the authors’ conclusion remains:

…we think that our results on planet formation, with the present binary conﬁguration, are relatively robust. Our main result is that it is very diﬃcult for s < 30 km planetesimals to have accreting encounters beyond 0.5-0.75 AU from the primary, which makes planet formation very unlikely in these regions.

Observationally, of course, we lack the data to know just what we might find around 1 AU at Centauri A. Radial velocity studies have shown that we can say only one definitive thing about planets around this interesting star: If they exist, they are smaller than 2.5 Jupiter masses. The new work, which takes what the authors believe is a more realistic set of assumptions for differences in sizes among planetesimals, suggests that if we find smaller worlds around this star, they will be relatively close to the star, too close for habitable conditions to exist there. A look at Centauri B using these parameters would be welcome.

The paper is Thébault et al., “Planet formation in Alpha Centauri A revisited: not so accretion-friendly after all,” accepted for publication in Monthly Notices of the Royal Astronomical Society (abstract). Centauri Dreams has covered a good deal of recent work by Elisa Quintana, Jack Lissauer, Greg Laughlin and others — you can use the search function on the top page to find these entries, or to get a representative sample, look here and here and here, where citations are available.