Rosetta and the Language of Hope

There are several reasons to keep an eye on Rosetta, the European Space Agency’s mission to comet 67P/Churyumov-Gerasimenko. In 2014, the spacecraft will go into orbit around the comet before deploying a lander to the nucleus. Watching changes as the comet heads toward the Sun should prove interesting indeed, but these short term effects take place within a provocative longer-term context. For aboard Rosetta is a 2.8-inch diameter disc inside a small glass sphere containing some 6000 pages of information. The subject: The languages of planet Earth, many of which will disappear before century’s end. 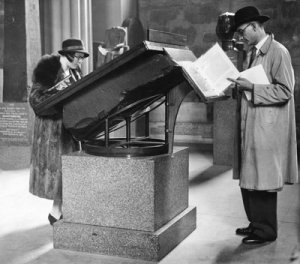 The synergy here is fascinating. The Rosetta Stone, one of the most impressive objects in the British Museum when you realize what you’re looking at, contains inscriptions that include Egyptian hieroglyphics, Demotic and classical Greek. The Greek, readily understood by linguists, helped researchers unravel the meaning of the hieroglyphics, a pioneering task performed 200 years ago at the hands of Jean François Champollion and Thomas Young, the latter (in the spirit of his time) both physicist and physician. Since those days, the term ‘Rosetta Stone’ has always referred to a key that unlocks a previously undecipherable mystery. Placing a disc from the Rosetta Project, which is building an archive of all documented human languages, aboard a spacecraft headed for a comet dovetails nicely with this theme.

Image: The Rosetta Stone on display at the British Museum in a somewhat less frenetic era. We can hope (but not assume) that future generations need no comparable find to decipher languages that are dying in our own century. Credit: Getty Images.

Now Rosetta (the spacecraft) appears to be doing quite well. A trajectory correction maneuver was carried out on the 14th of August using optical tracking data of asteroid 2867 Steins. The vehicle will conduct a flyby past the asteroid next month at a distance now estimated to be 800 kilometers, although we’re learning as we go, according to Trevor Morley, who leads the Rosetta Flight Dynamics Orbit team at ESOC, Darmstadt, Germany:

“The closer we get to Steins, the more accurate our knowledge of the asteroid’s position relative to Rosetta will be. Thanks to Rosetta’s cameras, we will obtain increasingly precise measurements that will allow us to adjust again, if necessary, Rosetta’s orbit for an optimal asteroid encounter.”

Thus more trajectory maneuvers are possible in late August and early September. Closest approach to Steins is expected to be on September 5. As to the linguistic aspects of Rosetta, I see that the first version of the complete Rosetta Disk (the one aboard the spacecraft being an earlier iteration) has now been shown to the public. It contains on a 3-inch diameter nickel disk information on over 1500 human languages in 14,000 pages of text and images, all of which can be read at an optical magnification of 750x. More in this San Francisco Chronicle story.

The Rosetta Project involves not only the Long Now Foundation but also the National Science Foundation, Stanford University Libraries and the National Science Digital Library. And as you would expect, the spheres created by Rosetta are designed to last for a long time, at least 2000 years. As languages, particularly tribal dialects, are increasingly lost in the modern era of advanced telecommunications, we also lose ways of looking at the world that are expressed in particular idioms and metaphors, not to mention the linguistic structures that help us make sense out of how a culture views the world.

Why, in an era when we are landing on comets, do we need to be concerned about securing information for 2000 years and more? The assumptions behind the question are their own answer: We have grown so accustomed to believing that the arrow of progress points ever upward that we forget how tenuous a thing civilization can be. Yet in the larger scheme of things, the 1600 years that have passed since Alaric’s Visigoths entered Rome is but the blink of an eye. What wouldn’t we give for a preserved Library of Alexandria, or survivals of some of the abundant literature of medieval Europe that did not make it down to us in manuscript form?

We have to wish that our own civilization falls victim to no future dark age, but the danger signs, particularly in terms of nuclear proliferation, are all around us. The view from here is that civilizations walk a very narrow path in making their way up to Kardashev Type 1 status, a dangerous trek that can witness the death of all our aspirations or see us emerge on the other side with a power and mastery of Solar System resources we can hardly imagine today. Projects like Rosetta — both spacecraft and disk — remind us that we live within a historical context that shows us both outcomes, and contains both warning and hope.