“Neil Armstrong may well be the only human being of our time to be remembered 50,000 years from now.”

If anything, Neil Armstrong was almost too perfect for the role he played. If I had been asked to script the kind of character I’d like to have seen as the first man on the Moon, Armstrong would have walked into the role effortlessly, a quiet, even diffident man who had the courage to ride rockets. Flyers come in all descriptions, but those I used to hang around with in my own flying days (far tamer than any of Armstrong’s, to be sure!) were generally raconteurs, full of improbable tales that could never be verified, jongleurs seasoned in the arts of extroversion.

Not so Neil Armstrong, and therein lies the reason for my own sense of pride in the man and his accomplishment. July 20, 1969 was, inevitably, a hot day in St. Louis. I had driven to Webster Groves that afternoon to watch the moon landing with my future wife along streets that shimmered with heat. A native of the city, I was used to the humidity and it wasn’t because of it that my hands were sweaty. Like so many around the world, I was jacked up and nervous as a cat. We watched the landing to the sound of distant thunder, not learning until later just how pulse-pounding the actual touchdown became, though hearing about computer alarms during the descent made it clear this was one script that hadn’t proceeded precisely by the book.

Later that night, back at my own house after the first steps had been taken on the Moon, I looked at the LEM on TV and knew I was in the middle of history and that someday I would be explaining how it felt to my grandchildren. I slept little that night, my thoughts — now and then turning into dreams — playing the landing sequence over and over again. The next day, which was a Monday if memory serves, I drove downtown to buy tobacco at my favorite pipe shop and saw a huge banner draped across one of the buildings. Its words were simple: ‘We Made It!’ That sense of collective exaltation is something that’s hard to describe to those who weren’t fortunate enough to experience it. It transcended an Asian war and the era’s violent politics. 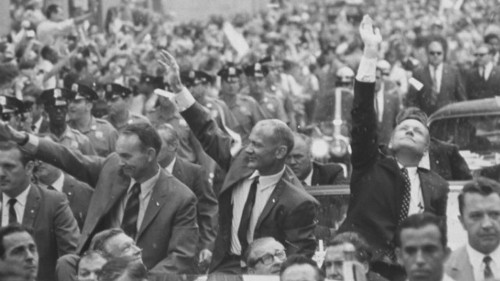 Image: A time like no other: Collins, Aldrin, Armstrong amidst an exultant crowd in August of 1969.

The details of Armstrong’s life are all over the media — this Washington Post story is a good summary, especially in its comment by James Hansen, who wrote Neil’s biography First Man (Simon & Schuster, 2005). Hansen’s take is that Neil didn’t want any part of what would surely have become blatant commercialism growing out of Apollo 11’s accomplishments. Thus the withdrawal from public life that grew out of the natural instincts of a loner. The analysis helps to explain a man some saw as mysterious and others as mythic.

He was both those things, of course, but like all human beings, he transcended easy description. Armstrong would become the space program’s Garbo, elevated and magnified by virtue of his very untouchability. I wondered last night what his final thoughts were as the end approached. Would he have played over in his mind the dramatic moments of July 20, 1969? Maybe, and that’s how it would probably be scripted in a movie. But it’s just as likely that what he was perceiving in those last moments was deeply personal, a childhood Christmas, perhaps, or a favorite song during flight training, or the face of a woman he loved.

None of us can know how anyone else approaches death, but we are all creatures of bone, sinew and nerve and we live the truest part of our lives in the kind of deep emotional privacy that Neil Armstrong came to exemplify. This quietly dignified man vaulted into prominence only to remind us that great achievement does not have to walk hand in hand with ego. Indeed, Armstrong’s legacy will couple the Sea of Tranquility with the collected bearing of an individual who never elevated himself over others, whose gift of focused passion offers deep truths in the meaning of courage and character.