We Have Fed Our Sea

One of the reasons I do what I do is that when I was a boy, I read Poul Anderson’s The Enemy Stars. Published as a novel in 1959, the work made its original appearance the previous year in John Campbell’s Astounding Science Fiction as a two-part serial titled “We Have Fed Our Sea.” The reference is to Kipling’s poem “The Song of the Dead,” from which we read:

We have fed our sea for a thousand years
And she calls us, still unfed.
Though there’s never a wave of all her waves
But marks our English dead…

Space was, for Anderson, the new sea, one whose imperatives justify the sacrifices we make to conquer her, and “We Have Fed Our Sea” is a far better title for this work than its book version. Kipling writes:

We were dreamers, dreaming greatly, in the man-stifled town;
We yearned beyond the sky-line where the strange roads go down.
Came the Whisper, came the Vision, came the Power with the Need… 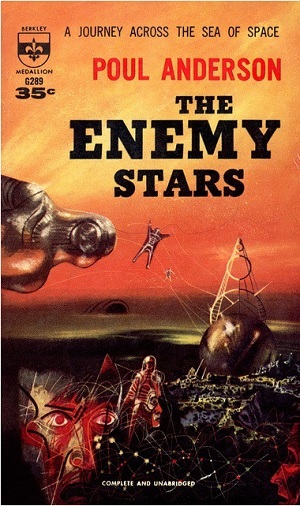 I bought The Enemy Stars at the Kroch’s and Brentano’s bookstore on S. Wabash Avenue in Chicago (this was the flagship store of the chain, and what an astonishing place it was for a book-dazzled boy like me to wander about in). I still have that paperback, and I can remember picking it up because of what was on the back cover:

They built a ship called the Southern Cross and launched her to Alpha Crucis. Centuries passed, civilisations rose and fell, the very races of mankind changed, and still the ship fell on her headlong journey toward the distant star. After ten generations the Southern Cross was the farthest thing from Earth of any human work – but she was still not halfway to her goal…

That was my first encounter with the idea that we might go to the stars in multi-generational ways. But Poul Anderson was always ahead of his time, and this is not a generation ship in the model of, say, Heinlein’s Orphans of the Sky. People do not live out their lives aboard the Southern Cross and hand on the great imperative of the mission to their descendants. Instead, crews in the Solar System are regularly teleported out to the ship.

It’s a wonderful story, and that Kipling reference will put a chill up your spine when you see what Anderson does with it. Baen Books incorporated a later novella called “The Ways Of Love” into its edition of The Enemy Stars in 1987, but I much prefer the unadorned core story. I went back to it this past weekend after writing On the Role of Humans in Starflight on Thursday, having thought for several days about the different ways we approach doing long-term things. Probably if I had read Nelson Bridwell’s just published essay To Be or Not to Be? Mankind’s Exodus to the Stars a day earlier, I would have incorporated it into the Thursday post.

But today will do just as well, for Bridwell’s themes are much to the point, reminding me of generation ships in all their manifestations, as well as generation-spanning projects. Described as a ‘senior machine vision engineer working in manufacturing automation,’ the author sees interstellar flight as a natural and necessary outcome of our space efforts, one that will take millennia and will not require violations of physical law. It is an effort, though, that should not be delayed. Writes Bridwell:

Because starships will not be ready to go for many centuries and interstellar voyages may last for thousands of years, we will want to get started sooner rather than later, initially allocating a small but steady fraction of the space budget to identify the most promising engineering approaches and performing early proof-of-concept experiments when affordable. The first application of this technology will be for unmanned interstellar probes that will conduct close-up reconnaissance of nearby solar systems.

Taken to its outer limit, a long-term perspective on Earthly life tells us that the planet will eventually meet its doom, if in no other way, through the gradual swelling of our parent star. But as Bridwell points out, we’re a long way from not just starflight but even a sustained human presence off this planet. It’s prudent, then, to do whatever we can to minimize the existential risk of something happening in the interim to destroy our species. That might involve accelerating the search for near-Earth asteroids and comets to provide plenty of time to change the trajectories of those in dangerous orbits. It also might involve a heightened awareness of and countermeasures for the kind of pandemic that could cut the population in half, if not worse.

In terms of space, bringing the long-term focus of interstellar thinking into play involves continuing the search for promising nearby solar systems where humans may eventually travel even as we develop the kind of closed-loop life support technologies that would sustain human crews over the duration of long voyages. The latter aspect receives far less attention than it should, but it is as key a driver as propulsion for figuring out how to make star journeys.

I think Bridwell has it right that an interstellar effort grows directly out of sustained development here in our own Solar System. We will learn the essentials of closed-loop life support by experimenting in places much closer to home than even the nearest star:

Because it is not at all likely that a warm, moist, green, oxygen-rich twin of Earth will be within our reach, the third goal must be learning how to live under less-ideal conditions, such as on the Moon. We should establish manned outposts on the Moon and Mars where we can develop the expertise to efficiently manufacture everything that we need from local planetary materials. Over the course of hundreds of years, as these outposts grow, they will become second homes within this solar system for humanity.

I see this in terms of O’Neill-class colonies that gradually grow in size and sophistication, as well as bases on planetary surfaces. The immediate need is to develop our skills at living in nearby space so that if something does happen to our planet — nuclear war, perhaps, or biological catastrophe — enough colonies will exist to perpetuate the species. Over the course of the next few centuries, creating such self-sustaining populations in space should be within our technological powers, and these will inevitably spread outward as we explore our system’s resources. I find this prospect encouraging because it assumes nothing the laws of physics do not allow.

Bridwell wonders whether our reluctance to think beyond the current moment is not itself a passing phenomenon, perhaps ‘a madness left over from the Cold War.’ I do think it is a cultural phenomenon, though I have no opinions about its origins in 20th Century geopolitics. We make our own values by choosing what to build, what to believe in, and what goals to pursue. A positive perspective is one that protects the home world first while ensuring that unexpected catastrophe cannot destroy our species. It then begins the long process of exploration and settlement that may spread as far as the outer planets, or perhaps the Oort Cloud, or if we have the determination to make it happen, the distant stars Poul Anderson saw as our destiny.