If you look into the software that made possible yesterday’s exoplanet results, you’ll find that VESPA (Validation of Exoplanet Signals using a Probabilistic Algorithm) is freely available online. The work of Princeton’s Timothy Morton, who spoke at the announcement news conference, VESPA is all about calculating the probabilities of false positives for signals that look like transiting planets. Transits, of course, are what the Kepler space telescope has been about, catching the slight stellar dimming as a planet crosses across the face of a star.

The numbers quickly get mind-boggling because while Natalie Batalha (NASA Ames), joined by Morton, NASA’s Paul Hertz and Kepler/K2 mission manager Charlie Sobeck (a colleague of Batalha at Ames) could point to 1284 newly confirmed exoplanets, they represent only a fraction of what must be in the Kepler field of view. Out of its over 150,000 stars, Kepler can only see the planets that transit their host stars, making this a problem of orientation. We now have 2300 confirmed exoplanets in the Kepler catalog, but it’s clear that countless stellar systems are simply unviewable because they’re not lined up so as to make the identifying transit.

But back to VESPA and the technique that made yesterday’s announcement possible. The problems of false positives are legion when you’re looking at a light curve suggestive of a planet. For one thing, a brown dwarf or extremely low mass star may pass between Kepler and the star. For that matter, a larger star in a binary system may just ‘graze’ the limb of the host star, sending a planet-like signal that has to be untangled from the true planetary count. With these and other possibilities, we’ve relied upon verification through follow-ups, usually performed through radial velocity checks or even direct imaging of exoplanets.

All of this takes time and is resource-intensive, serious issues given the number of candidates (4700) found since launch. Morton calls the false positive signals ‘imposters,’ describing the VESPA method, which allows researchers to quantify the probability that any candidate signal is in fact a planet without requiring the lengthy follow-up investigations cited above. Two different kinds of simulation come into play, one involving transit signals and their causes, the other simulating how common the ‘imposter’ signals are likely to be in the Milky Way. 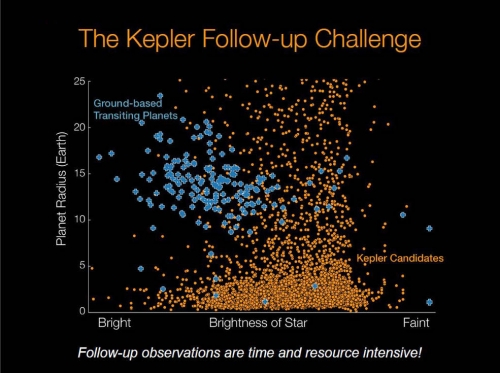 As this Princeton news release explains, the duration, depth and shape of a transiting planet signal are thus weighed against simulated planetary and false positive signals even as VESPA factors in the projected distribution and frequency of star types in the galaxy. Says Morton:

“If you have something that passes all those tests, then it’s likely to be a planet. We know small planets are common, so if Kepler sees a small-looking planet candidate and it passes the strict internal vetting, it’s more likely to be a planet than a false positive because it’s hard to mimic that signal with anything else… It’s easier to mimic something the size of Jupiter, and we know Jupiter-sized planets are less common. So the likelihood of a Jupiter-sized candidate actually being a planet that large is typically relatively low.”

VESPA works with information from both kinds of simulation to produce a reliability score between zero and one for each candidate signal. The candidates with a reliability greater than 99 percent are considered validated. The 1284 exoplanets announced yesterday all fit this standard, meeting what we can consider the minimum requirements for validation, while another 1327 candidates are considered likely to be planets although they do not score as high. 707 candidates turn out to be caused by non-planetary phenomena. It’s worth pointing out, too, that 984 candidates were revalidated — these had previously been verified by other methods. 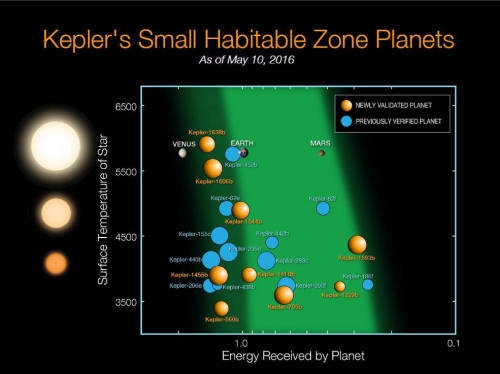 Image: Since Kepler launched in 2009, 21 planets less than twice the size of Earth have been discovered in the habitable zones of their stars. The orange spheres represent the nine newly validated planets announcement on May 10, 2016. The blue disks represent the 12 previous known planets. These planets are plotted relative to the temperature of their star and with respect to the amount of energy received from their star in their orbit in Earth units. The sizes of the exoplanets indicate the sizes relative to one another. The images of Earth, Venus and Mars are placed on this diagram for reference. The light and dark green shaded regions indicate the conservative and optimistic habitable zone. Credit: NASA Ames/N. Batalha and W. Stenzel.

The announcement of 1284 confirmed exoplanets is the largest single announcement of new planets ever made, doubling the number of confirmed planets, with VESPA being used to calculate the reliability values of over 7000 signals from the latest Kepler catalog. This work gains additional weight as we consider the upcoming TESS (Transiting Exoplanet Survey Satellite) mission, which will be performing an all-sky survey of bright, nearby stars that will doubtless reveal tens of thousands of new candidates, all in need of confirmation.

Natalie Batalha recalled early work on transit photometry with a small robotic telescope at Mount Hamilton (CA), where researchers were plagued with false alarms, up to 70 percent of the signals proving to be non-planetary. Clearly, as Kepler became available, our methods increased greatly in accuracy, but as we move toward the final discovery catalog of this mission next year, we’ll be using methods like VESPA to continue sorting through candidate data, looking ahead not just to TESS, due to launch in 2017, but also the European Space Agency’s PLATO (PLAnetary Transits and Oscillations of stars ), designated for launch by 2024.