A Closer Look at Ultima Thule

“We think we are looking at the most primitive object ever imaged by a spacecraft,” said Jeff Moore (NASA Ames) at today’s Ultima Thule press conference. Moore, New Horizons geology and geophysics lead, went on to describe the process of innumerable particles growing into nodes amidst growing low velocity collision and interaction. We are truly looking at primordial materials with Ultima Thule, which is now revealed as a contact binary. Have a look. 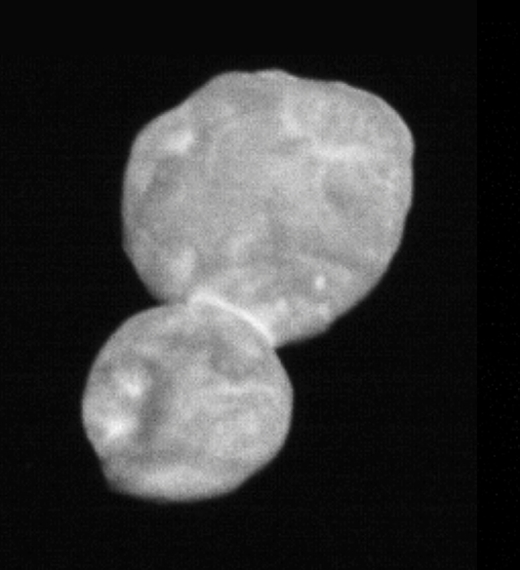 Image: This image taken by the Long-Range Reconnaissance Imager (LORRI) is the most detailed of Ultima Thule returned so far by the New Horizons spacecraft. It was taken at 5:01 Universal Time on January 1, 2019, just 30 minutes before closest approach from a range of 18,000 miles (28,000 kilometers), with an original scale of 730 feet (140 meters) per pixel. Credit: NASA/Johns Hopkins University Applied Physics Laboratory/Southwest Research Institute.

Bear in mind that New Horizons was working with a Sun 1,900 times fainter than a sunny day on Earth, as mission principal investigator Alan Stern reminded the audience when he unveiled the image above. “It’s a snowman, not a bowling pin,” joked Stern as the image was displayed. Bear in mind as well that these early images are just the beginning. The mission team has now downloaded less than 1 percent of the data available on the spacecraft’s solid state recorders.

One of Jeff Moore’s slides: 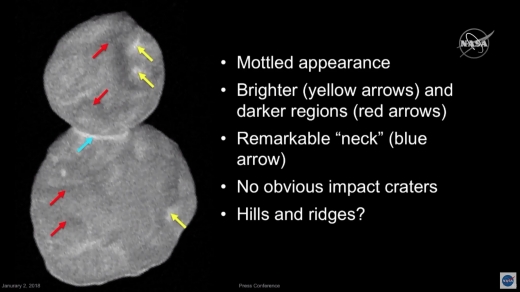 And here’s the slide Moore showed to illustrate the process of accretion:

Putting these two lobes together would, Moore said, be gentle enough that “…if you were in a car collision at this speed you wouldn’t bother to fill out the insurance forms.” These are high-Sun images, meaning we see little shadow, but the Sun angle will change as we move into later views at higher resolution. Even so, note the absence of obvious impact craters, and the mottled suggestions of hills and ridges. Also note the brightness of the ‘neck’ between the lobes.

Image: The first color image of Ultima Thule, taken at a distance of 85,000 miles (137,000 kilometers) at 4:08 Universal Time on January 1, 2019, highlights its reddish surface. At left is an enhanced color image taken by the Multispectral Visible Imaging Camera (MVIC), produced by combining the near infrared, red and blue channels. The center image taken by the Long-Range Reconnaissance Imager (LORRI) has a higher spatial resolution than MVIC by approximately a factor of five. At right, the color has been overlaid onto the LORRI image to show the color uniformity of the Ultima and Thule lobes. Note the reduced red coloring at the neck of the object. Credit: NASA/Johns Hopkins University Applied Physics Laboratory/Southwest Research Institute.

Ultima Thule’s rotation period is currently pegged at 15 hours, plus or minus an hour. The object turns out to be red, as expected. As to reflectivity, deputy project scientist Kathy Olkin (SwRI) pointed out that the brightest areas reflect about 13 percent of incident sunlight, the darkest areas only 6 percent. Ultima Thule is, in other words, very dark, as dark as potting soil, Olkin added, with significant variation across the surface.