Because building an economically sustainable infrastructure in the Solar System is crucial for the development of interstellar flight, I was interested to learn about a game called High Frontier, which looks to combine O’Neill habitats with a steady expansion of our species outward. Have a look at the Kickstarter campaign page if the idea of modeling space colonies as an extension of human civilization appeals to you. High Frontier seems to be a chance to get involved in game creation from the ground up to create models of how a starfaring culture might grow.

I’ve never gotten involved in gaming, but I can see the potential for education in games that accurately model complex economies or cultural interactions. In the case of deep space scenarios, it’s possible to model an interstellar mission that does not rely on an established infrastructure. Indeed, we just looked at one in Dana Andrews’ recent paper, which asks how a mission without such resources could be mounted. But building a system-wide economy that can sustain an interstellar effort and tunes up the basic technologies seems like the most likely outcome, and I’m all for exploring the various scenarios within which that could occur.

Back to the Exoplanet Chase

As we build infrastructures, whether in simulations or in reality, we keep looking outward at potential targets for exploration, and at stellar systems that tell us more about how planets form. The news about a multiple-star system called GG Tauri-A, some 450 light years from Earth in the constellation Taurus, is intriguing. This is a system with a large, circumbinary outer disk as well as a second, inner disk around one of the two binary components. The inner disk is losing material to its star at a rate that should have made it disappear a long time ago. 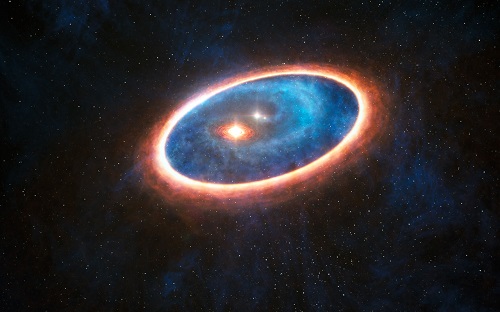 A research team led by Anne Dutrey (Laboratory of Astrophysics of Bordeaux and CNRS) used the Atacama Large Millimeter/submillimeter Array (ALMA) in new observations of the dust and gas dispersed in the GG Tau-A system. What has turned up are clumps of gas flowing between the outer and inner disk, replenishing and sustaining the latter. Here’s Dutrey’s comment on the finding:

“Material flowing through the cavity was predicted by computer simulations but has not been imaged before. Detecting these clumps indicates that material is moving between the discs, allowing one to feed off the other. These observations demonstrate that material from the outer disc can sustain the inner disc for a long time. This has major consequences for potential planet formation.”

Indeed, it’s an interesting situation. In close binaries, we might expect to find a circumstellar disk around each star, and an outer circumbinary disk around both. The paper makes the case that inner disks should be depleted on timescales of no more than a few thousand years as their material is accreted onto the parent star. Here we’re seeing a replenishment process that heightens the possibility of planet formation by continually feeding this region with new materials.

This isn’t the first time that a gas flow between two disk systems — or between gaps within a single disk — has been found. Around the young star HD 142527, Simon Casassus (Universidad de Chile, Chile) and colleagues found streams of gas flowing across such a gap and described it in a paper published in 2013. At HD 142527, the inner disk extends to about 10 AU, with the outer disk about 14 times further out. As with GG Tau-A, these findings were made with ALMA.

We’re looking at a mechanism that could play a significant role in planet formation around both single and binary stars. The paper summarizes the finding, noting that the outer ring shows a distinctive ‘puffed-up’ rim which the researchers think could be caused by stellar heating:

Our observations demonstrate that active replenishment from the outer disk can sustain the circumprimary disc surrounding GG Tau-Aa beyond accretion lifetime, increasing its potential for planet formation. The presence of the condensation at the inner edge of the outer ring is puzzling and needs further investigations to determine its links with accretion processes and possible planet formation. Since almost half of Sun-like stars were born in multiple systems, our observations provide a step towards understanding the true complexity of protoplanetary discs in multiple stellar systems and unveiling planet formation mechanisms for a significant fraction of stellar systems in our Galaxy.

Notice the reference to GG Tau-Aa above. GG Tau-A is part of a still more complex star system known as GG Tauri. This ESO news release points out that recent observations of the multiple star system show that one of its stars — GG Tau Ab, the one that is not surrounded by a disk — is itself a close binary, consisting of GG Tau-Ab1 and GG Tau-Ab2. Beneath the cumbersome nomenclature is the fact that we have identified five objects altogether in the GG Tauri system.