Finding planets around stars that are two and a half times older than our own Solar System causes a certain frisson. Our star is four and a half billion years old, evidently old enough to produce beings like us, who wonder about other civilizations in the cosmos. Could there be truly ancient civilizations that grew up around stars as old as Kepler-444, a K-class star in the constellation Lyra that is estimated to be fully 11.8 billion years old? It’s a tantalizing speculation, and of course, nothing more than that. But the discovery of planets here still catches the eye.

The just announced discovery and accompanying paper are the work of Tiago Campante (University of Birmingham, UK), who led a large team in the investigation. What we learn is that five planets have been discovered using Kepler data around a star that is 117 light years from Earth. These are not habitable worlds by our standards — all five planets complete their orbits in less than ten days, making them hotter than Mercury. 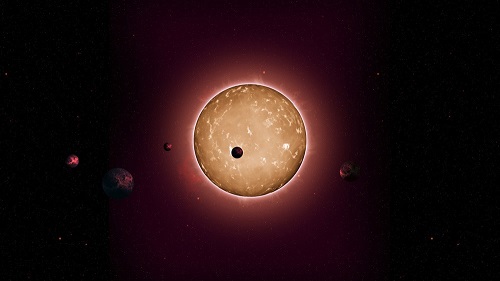 Asteroseismology, which measures the oscillations caused by sound waves within the star as shown in minute brightness changes,, was a key part of this work, says Daniel Huber (University of Sydney), a co-author on the paper:

“When asteroseismology emerged about two decades ago we could only use it on the Sun and a few bright stars, but thanks to Kepler we can now apply the technique to literally thousands of stars. Asteroseismology allows us to precisely measure the radius of Kepler-444 and hence the sizes of its planets. For the smallest planet in the Kepler-444 system, which is slightly larger than Mercury, we measured its size with an uncertainty of only 100 km.”

We’ve found planets in low-metallicity environments before, such as the mini-Neptunes around Kapteyn’s Star in the galactic halo. This work takes the low-metallicity planet regime down to the size of terrestrial planets. All five of these planets are below Earth in size, with radius increasing with distance from the star, although three of them — Kepler 444c, Kepler-444d, and Kepler-444e — have similar radii comparable to the size of Mars. Kepler-444f is found to be between Mars and Venus in size. To place the find in perspective, here’s a figure from the paper that relates the Kepler-444 planets to other highly-compact multiple-planet systems. 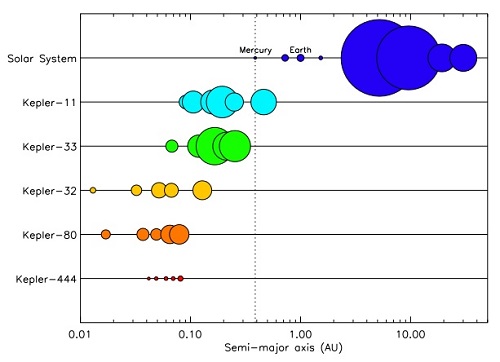 Image: Semi-major axes of planets belonging to the highly-compact multiple-planet systems Kepler-444, Kepler-11, Kepler-32, Kepler-33, and Kepler-80. Semi-major axes of planets in the Solar System are shown for comparison. The vertical dotted line marks the semi-major axis of Mercury. Symbol size is proportional to planetary radius. Note that all planets in the Kepler-444 system are interior to the orbit of the innermost planet in the Kepler-11 system, the prototype of this class of highly-compact multiple-planet systems. Credit: Campante et al.

But what about that lack of metals we would assume for stars this old? The paper points out that while gas giant planets do seem to form around metal-rich stars, smaller planets (defined here as those with a radius less than four times that of Earth), can form under a wide range of metallicities. From the paper:

This could mean that the process of formation of small, including Earth-size, planets is less selective than that of gas giants, with the former likely starting to form at an earlier epoch in the Universe’s history when metals were far less abundant (Fischer 2012).

What does seem important, the paper argues, are the so-called α-process elements, the α-process being one of the classes of fusion reactions that allows stars to convert helium into higher elements. The α-process elements include carbon, nitrogen, oxygen, silicon and others that are significant in the formation of Earth-like worlds. The paper continues:

In particular, α elements comprise the bulk of the material that constitutes rocky, Earth-size planets (Valencia et al. 2007, 2010). Stars belonging to the thick disk [see diagram below] are overabundant in α elements compared to thin-disk stars in the low-metallicity regime (Reddy et al. 2006), which may explain the greater planet incidence among thick-disk stars for metallicities below half that of the Sun (Adibekyan et al. 2012c). Similarly favorable conditions to planet formation in iron-poor environments seem to be associated with a fraction of the halo stellar population, namely, the so-called high-α stars (Nissen & Schuster 2010). Thus, thick-disk and high-α halo stars were likely hosts to the first Galactic planets. 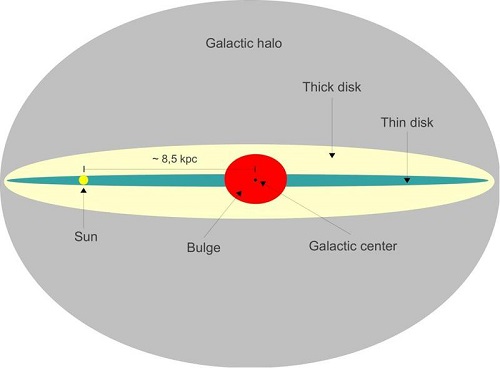 Image: An edge on view of the Milky Way. Credit: Wikimedia Commons.

It’s striking to consider that when our own planet formed, Kepler-444 and its planetary system were already older than our own planet is today. Kepler-444 appears to be slightly older than Kepler-10, which is known to have two super-Earths in orbit around it. As we find more such worlds, we’re learning that Earth-sized planets may have formed throughout much of the history of the universe.